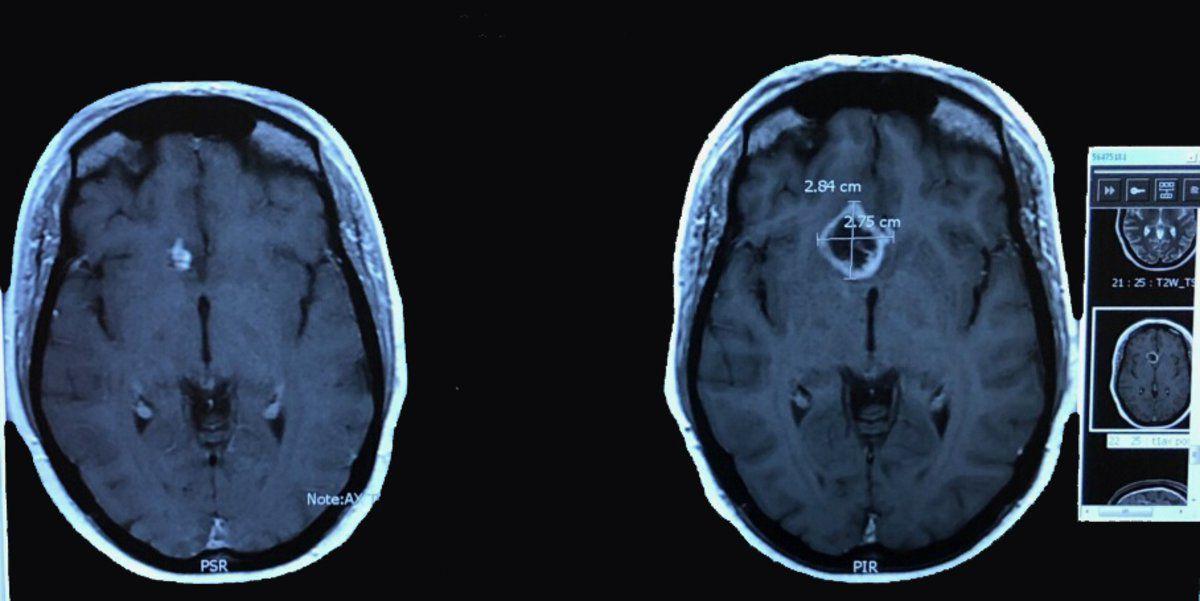 Baker's tumor is now a dot on the screen. 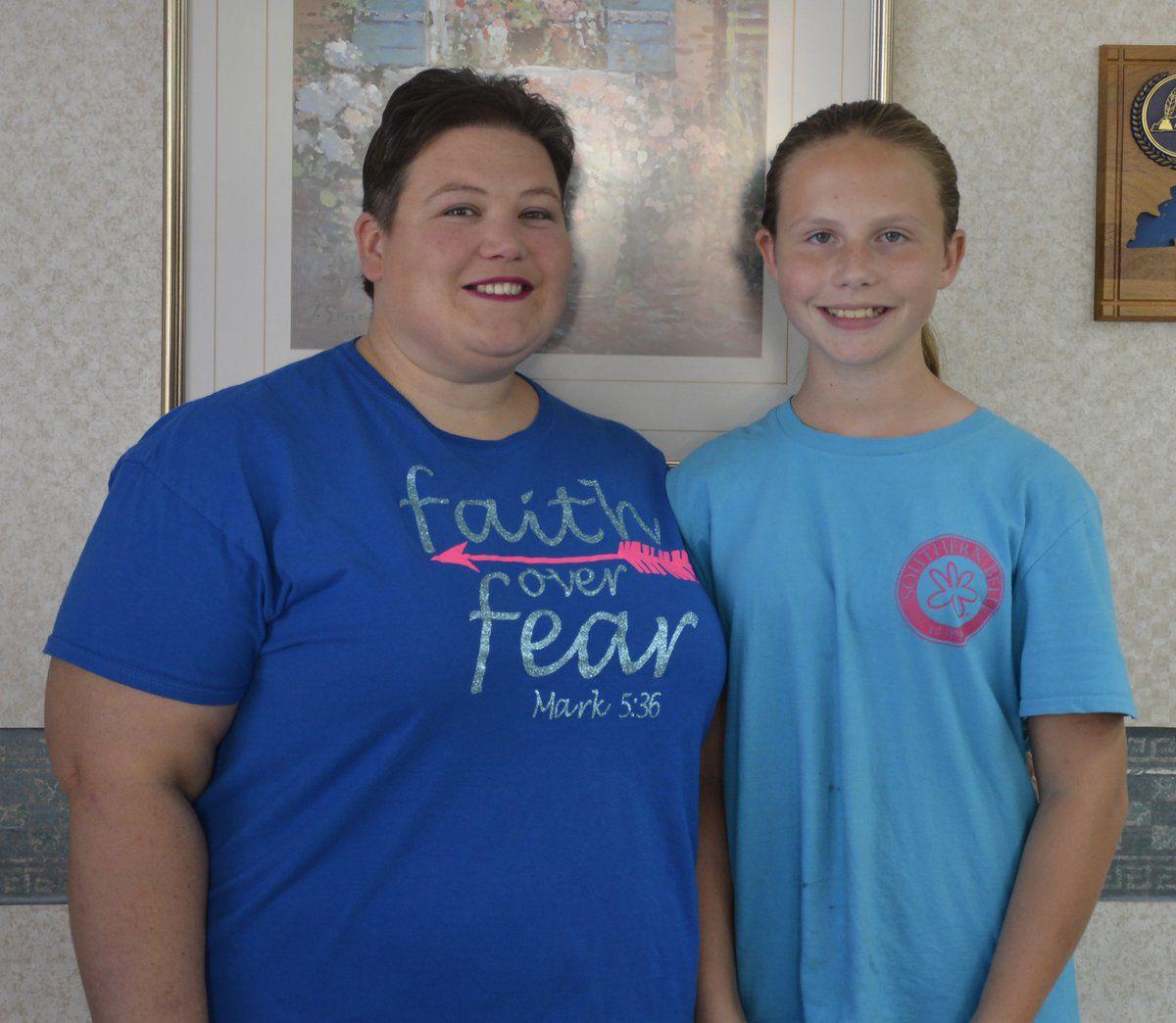 Baker's tumor is now a dot on the screen.

Never in a million years did Mary Ann Brennan Baker think falling into a trashcan would affect her life as much as it has.

"God has a sense of humor," Baker said.

It was a normal trash day and she had gone outside to get her trashcan from the road. She had the lid open after taking some trash out with her and, rather than close it, she decided to keep it open.

While trying to place the trashcan back in its place, she stepped onto the lid. Though she thought she fully stepped off of it, the darkness prevented her from seeing she hadn't all the way.

The wheels of the trashcan took off and pulled her down with it. She had no time to catch herself as she went down and hit her head above her right eye on the rim of the trashcan; this almost knocked her out.

After gathering her senses, she got out of the trashcan and planned to explain to her daughter Olivia how to watch her for a head injury. After deciding that probably wasn't a good idea, she told her to call Mamaw, Baker's mother, to take her to the hospital.

The ER doctor did a CT scan and didn't find anything so he sent her home. The next day she got a call from the hospital.

"It was the ER director, Dr. Howard, and he said, 'from the fall there was nothing but there is something there that's not supposed to be,'" Baker said.

Howard told her he wasn't sure what it was and described it as a cyst. They sent it to her primary physician as a critical test result and told her she'd have to have an MRI.

"I had an MRI and they thought it was a cluster of blood veins so they sent me to a neurosurgeon," Baker said.

After looking at the MRI, the neurosurgeon was pretty confident it was a tumor but ordered another MRI to get better pictures. He referred Baker to a tumor specialist as well.

The next MRI and MRA confirmed that he was correct, it was not a cluster of blood veins. She went to the specialist at Vanderbilt and she told Baker that it was either a tumor, MS or an infection.

"I'm thinking, 'I'm rooting for an infection,'" Baker said. "Never in my life did I think I would say I hope I have an infection in my brain, but that was the day."

The neurosurgeon gave her two options: Wait and see what happens - because she wasn't showing neurological signs or symptoms - or get a biopsy.

"Waiting was not an option for me," Baker said. "They had already told me there was something there that wasn't supposed to be so they were gonna tell me what it was."

On Dec. 4, 2017, the doctors came back with a diagnosis of glioma and that is was cancer. Glioma is a type of tumor that occurs in the brain and spinal cord.

"The worst time for me was probably the not knowing," Baker said. "It was in October when I first fell, so from October to December of them using that 'C' word, cancer, it was just all that wondering and waiting."

Upon finding out her diagnosis, she began radiation that lasted for seven weeks. She took chemo pills as well.

"Radiation is not an easy thing to go through," Baker said. "It made me sick and it made my hair fall out because my head was getting radiated."

She did non-radiation beams five days a week for seven weeks, and by the end of those seven weeks she said she was just worn out. They had to wait four weeks after radiation was over to scan again because the radiation can cause inflammation and make the tumor look worse than it is.

"We waited exactly four weeks from the end of radiation and they scanned the tumor and it was a bit bigger, which was very disappointing," Baker said. "I had my heart set on it being gone. I felt like I'd done everything they said to do, but it was bigger, not by a lot, but still not at all what we were hoping for."

She was placed on a higher dose of chemo since it was too soon to do radiation again. The next few times she went in for scans, the tumor was bigger. That cycle went on for a couple of months.

Finally, she went in for another scan and it was a bit smaller but not back to the starting size.

"A bit smaller was better than growing and after that it's been smaller every time," Baker said. "I went in February of this year and from February to May, it was like more than half the size that it had been."

When she went back in August, it was half the size again. Now on the scans, the tumor is just a dot.

"People tell me all the time, you're so strong and I'm like, it's not me. That's God. It's divine intervention," Baker said. "I believe that God helped me fall into that trashcan."

Through all of this, Baker said she has had a fantastic support system: Her mom, dad, sisters, brother, extended family, church family.

"It's almost overwhelming, you know, I've had people from other countries praying for me, people that I don't even know," Baker said.

The Princeton community has been a solid support system, too. It could be people who know her mom, her sister, or people she took care of at the hospital who remember her.

"I definitely have a good support system and that helps," Baker said. "I don't know how people get through things without having that."

She believes she is still here for a reason.

Baker is still going through chemo.