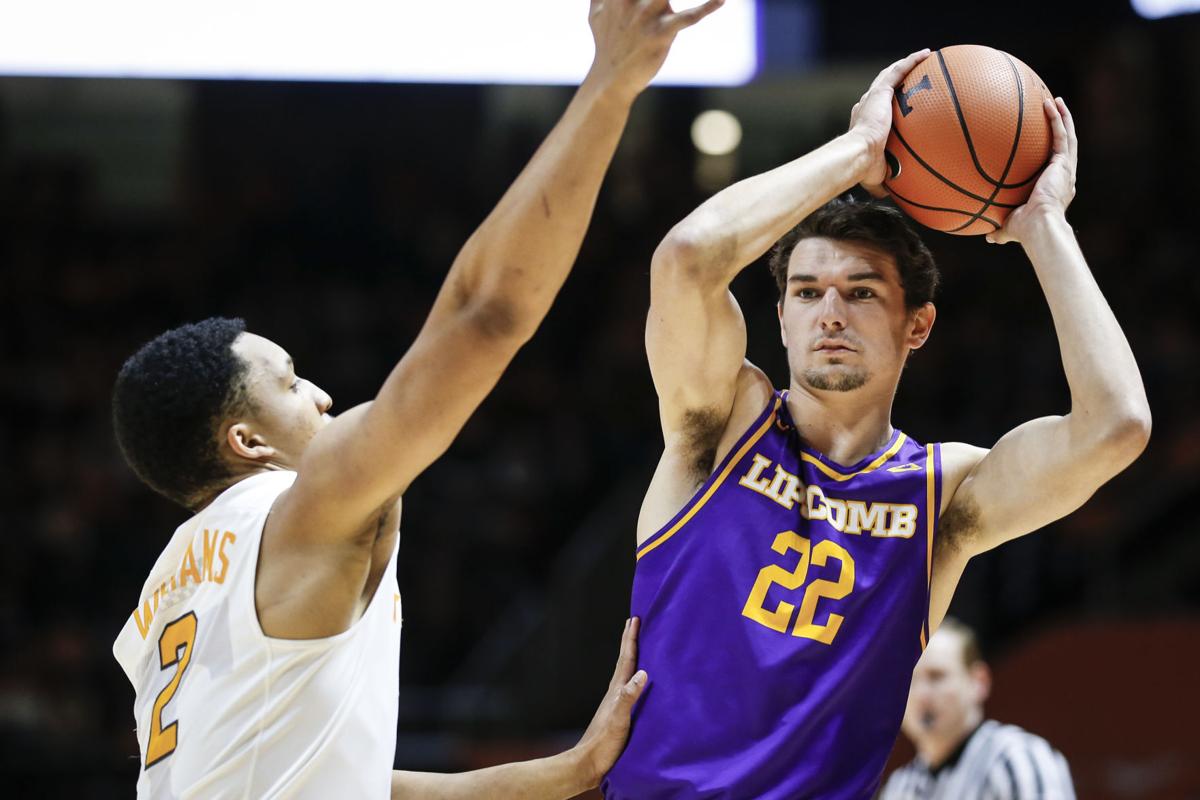 Caldwell County graduate Eli Pepper looks to make a pass at Clemson during the 2018-19 season. Pepper, who holds the career rebounding record at Lipscomb, was named to the Atlantic Sun Conference all-decade team for men’s basketball. 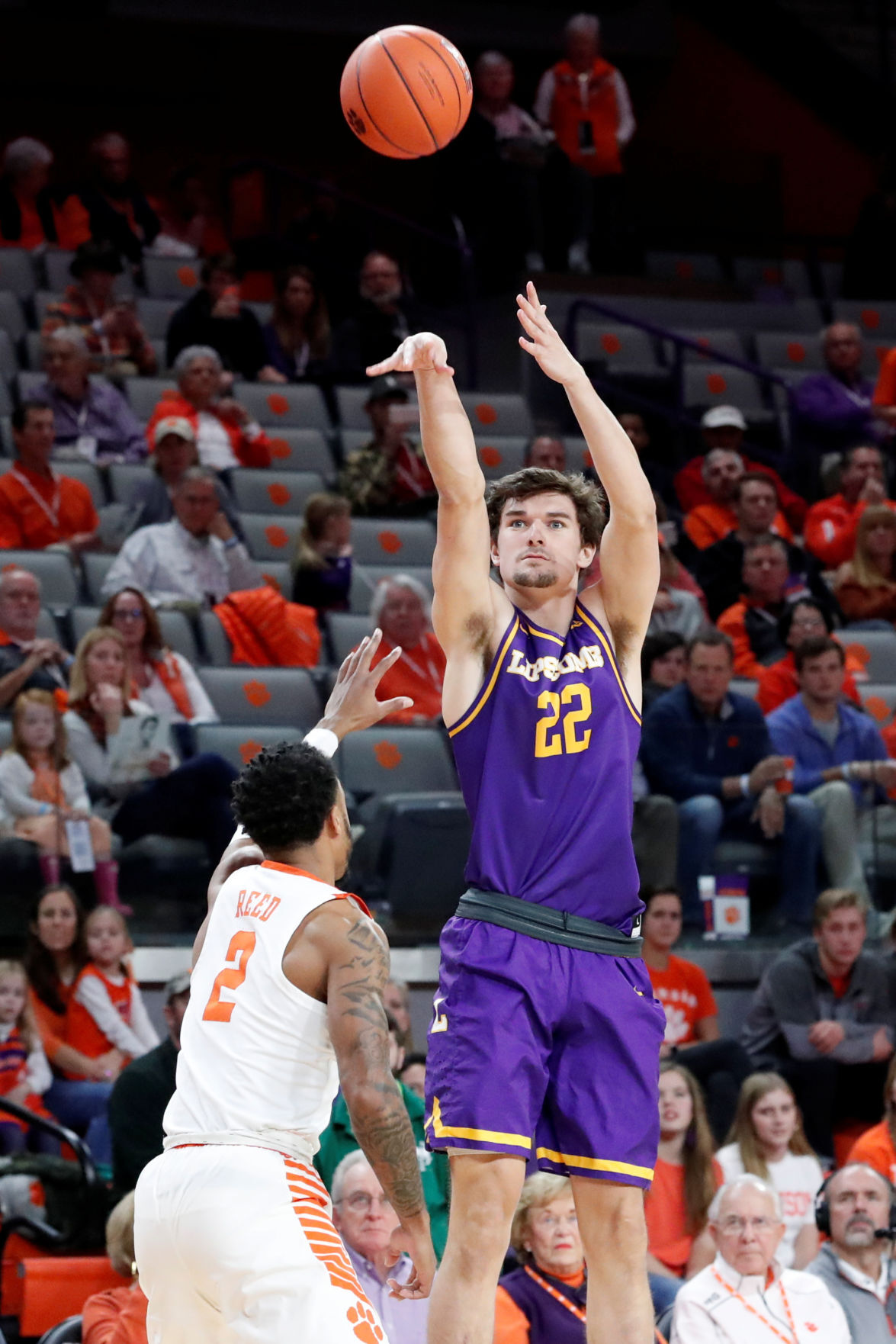 Eli Pepper puts up a shot against Clemson in the 2018-19 season. Pepper, a 2015 CCHS graduate, was named to the Atlantic Sun Conference all-decade team for men’s basketball.

Caldwell County graduate Eli Pepper looks to make a pass at Clemson during the 2018-19 season. Pepper, who holds the career rebounding record at Lipscomb, was named to the Atlantic Sun Conference all-decade team for men’s basketball.

Eli Pepper puts up a shot against Clemson in the 2018-19 season. Pepper, a 2015 CCHS graduate, was named to the Atlantic Sun Conference all-decade team for men’s basketball.

Eli Pepper set the record for career rebounds in his four years at Lipscomb University, the first at the NCAA Division-I school to break the four-digit barrier with 1,006, which ranks third all-time in the Atlantic Sun Conference.

On July 15, Pepper was one of 20 players in the nine-team conference to be named to the A-Sun Conference Men’s Basketball All-Decade Team for 2011-20.

“That felt good,” he said Thursday of the honor. “I remember playing against some of the guys on there. You’ve got Brandon Goodwin (of Florida Gulf Coast). He’s playing in the league (for the Atlanta Hawks). My roommate, Garrison Matthews, who’s playing for the Wizards.

“It’s awesome to think you could be on a team like that. To even be considered with those names — it left me speechless. I didn’t even think it was coming, didn’t even think they were releasing an all-decade team. … It puts in your mind that all that work you did those past four years definitely paid off and makes you think you did something special.”

Pepper’s road from the CCHS Community Activities Building to the all-decade team was difficult for the three-sport Tiger standout.

“Luckily, in high school, I got hooked up with a guy named Justin Barrington, who runs an AAU (Amateur Athletic Union) team up in Illinois,” he said. “If it wasn’t for him, I don’t think I’d even get the chance to play college basketball at all.”

“Lipscomb was an up-and-coming program,” Pepper said. “I liked it because it didn’t have a ton of history and it would be a good place to go to start something new and help build a program.

“It just felt like home. I live in a small town — and Nashville is a huge town compared to here, obviously — but being on Lipscomb’s campus made me feel at home, too. You know everybody there.”

Pepper, who stands 6-foot-9, said rebounding has been his specialty from the start.

“Scoring has never really been my forte,” he said. “I’ve always bought into the role of rebounding just because I had a natural knack for it, and I took advantage of it.”

“My last year (at CCHS), it was ‘Please don’t play other sports,’ ” he said. “I feel like, if you want to play in college, it doesn’t matter what sport it is, the recruiters and coaches are going to absolutely love that you were useful in other sports.

Pepper helped Lipscomb to the 2018 A-Sun Conference Tournament championship and a trip to the NCAA Tournament and the 2019 regular-season title, pushing the Bisons to the NIT championship game.

“The NCAA Tournament my junior year was the most surreal sports experience I ever had,” he said. “I’ll never forget the buzzer going off at Florida Gulf Coast (at the A-Sun tournament championship game) and I remember looking at my teammates and it was completely silent when the buzzer went off except for the Lipscomb fans.

“Going to the NIT, I’ll never forget that I set the (Lipscomb career rebounding record) at Madison Square Garden against Wichita State (in the semifinals). Then, we played Texas (in the championship), and we played terrible. I’ve always told people that I would go back to the NIT again, go through that whole process and lose in the championship again because that’s how much it meant to me. That’s how fun it was.”

Now working for Farmers Bank & Trust in Princeton after playing one season of pro basketball in Glasgow, Scotland, Pepper is bringing his experience to the hardcourt where he first learned to play, entering his second season as an assistant basketball coach at CCHS.

“(Coaching at CCHS) was putting my basketball world on its head,” he said. “I never thought I would have more fun than anything playing basketball, and coaching to me is 10 times more fun than playing.

“I never thought that I wanted to coach. Now, I want to do it for as long as I possibly can.”