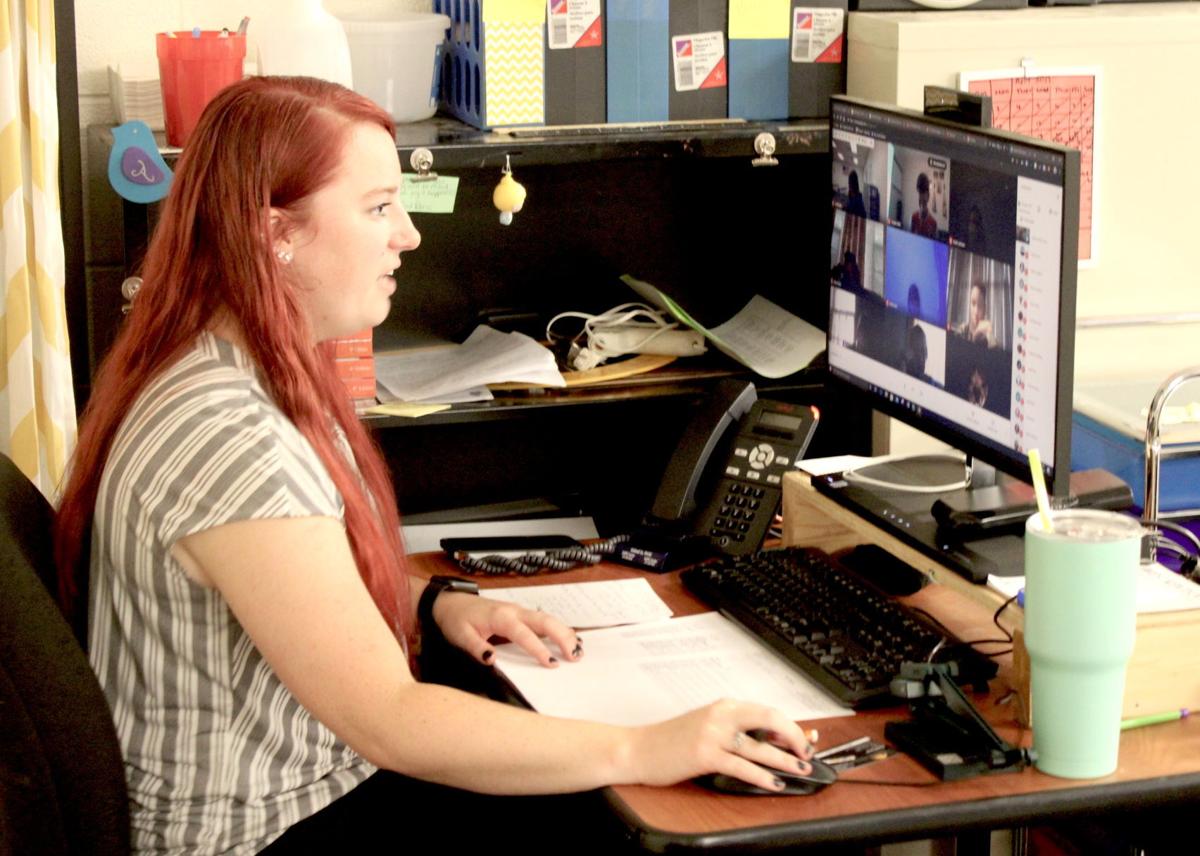 Caldwell County High School math teacher Ashlea Smith greets the students who have logged into her class thus far through Zoom. To prevent the spread of COVID-19, classes and classwork are being tended to through the internet. 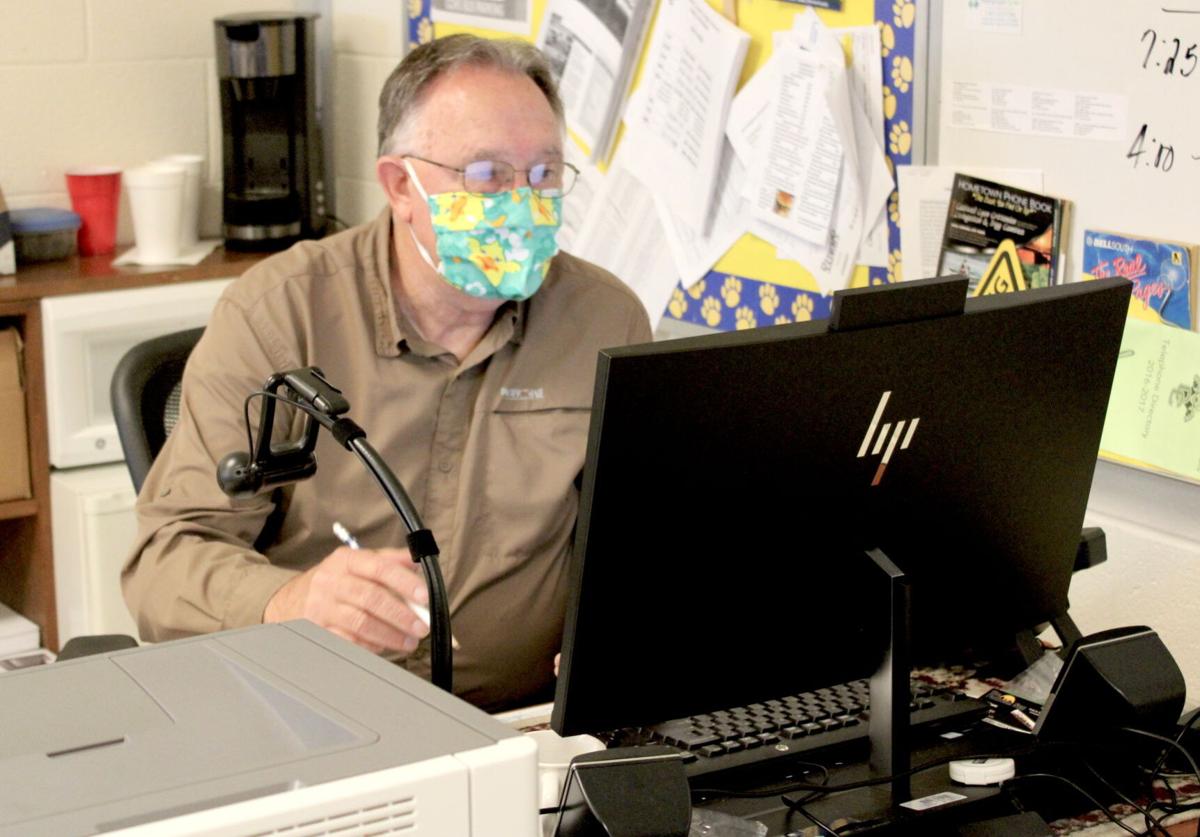 Caldwell County High School math teacher Ashlea Smith greets the students who have logged into her class thus far through Zoom. To prevent the spread of COVID-19, classes and classwork are being tended to through the internet.

For the first five weeks of the 2020-21 school year, Caldwell County students will take instruction at home through internet connections with their teachers.

What was called non-traditional instruction, or NTI, last spring is the fall-back method when the numbers involving the spread of COVID-19 are deemed too high to risk further spread of the disease by having students gather in the schools.

When schools were forced into NTI last March, there was almost no preparation, and students were given work assignments. However, this time, teachers, staff and administrators have had time to prepare for this need, and online instruction is much more like in-school instruction than it was last spring.

“We’ve got a very good schedule because the research is showing that any time over five hours on the computer is not good for kids. We kind of broke the kids’ schedules down to where we have a seven-period day.”

Subjects are taught in blocks at the high school, with the school day starting with a new style of homeroom.

“Basically, we have a main virtual page, and every day, that’s where we want the kids to check in in the morning,” said Phelps. “We have announcements and things they need to know. Then, they break off and they have classes that are divided throughout the day.

Phelps said that classes are given during traditional school times and accommodations are made for those without access to technology.

She added that students have access to their teachers if they have problems understanding a concept or figuring out the lesson that was taught.

The school year began for Caldwell County students Aug. 24 with all students taking instruction at home, through a recommendation made earlier that month by Gov. Andy Beshear. He also recommended that in-home instruction continue through Sept. 25.

David Shaffer, a math teacher at CCHS, conducts class like most teachers: through Zoom or Microsoft Teams, which allows several people to meet together online.

He also uses the technology to do mundane yet important duties such as taking attendance. What is usually a simple exercise with students in the classroom has been changed by health concerns, but made no more complex.

CCHS teachers have their own web page and use email to help assign or collect homework or answer questions students may have after class.

Ashlea Smith is another CCHS math teacher. Her classes can have as many as 47 students at a time.

“Good morning!” she told her online class on Monday to little response. “Everybody good? Y’all need to wake up this morning!”

“We’re trying to kind of do a flipped concept, where the kids watch the lesson at home that the teacher is presenting, and then, when they get on the Zoom lesson, they’re actually working the problems together and they’re actually doing the work together that may frustrate them when they’re at home trying to do it,” Phelps said.

Access to the internet has been bolstered by providing almost every student in the district with a ChromeBook laptop computer. The district is working to enable each student to have one.

“Most of the kids got a ChromeBook,” Phelps said. “Thanks to several churches in town, for those kids who needed sponsorships, we were able to provide ChromeBooks to some students, and that was nice.

“If they don’t have internet at home, we’re working on doing some jump drive data dump exchanges for them.”

Most schools and some local businesses also provide free WiFi to provide internet access to those who don’t have it.

The school had an expanded orientation during the first week of school. Usually held for freshmen and new students, the orientation was for all students to get them acclimated to the new way of having school.

“(Aug. 24 and 25) were freshmen,” Phelps said. “They were here until 1:30 every day, then we had crunch time — Wednesday, Thursday and Friday — where we had a group in the morning and a group in the afternoon.

“We got them in, they went to all their classes, they met with all their teachers. The Cope and Hope Center made binders for every student.

“So, if they brought their $30, they left with a ChromeBook, a binder that had paper in it and dividers in it and the QR codes and any other information the teachers wanted them to have.”

The at-home instruction model is not likely to take permanent hold in any school system, but using the extended preparation time and the sharing of ideas, area teachers are making the most of a unique situation to ensure that the new teaching method will result in traditional learning.