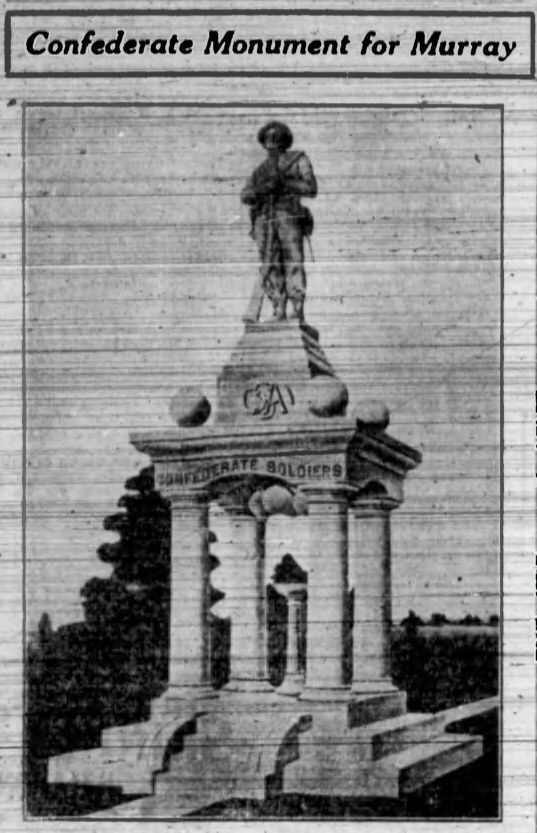 A publicity photo in advance of unveiling the Robert E. Lee statue at the Calloway County Courthouse ran in the Murray Ledger in June 1917. The pictured photo is not identical but similar in essentials to the current statue, which has undergone some renovations since being installed. 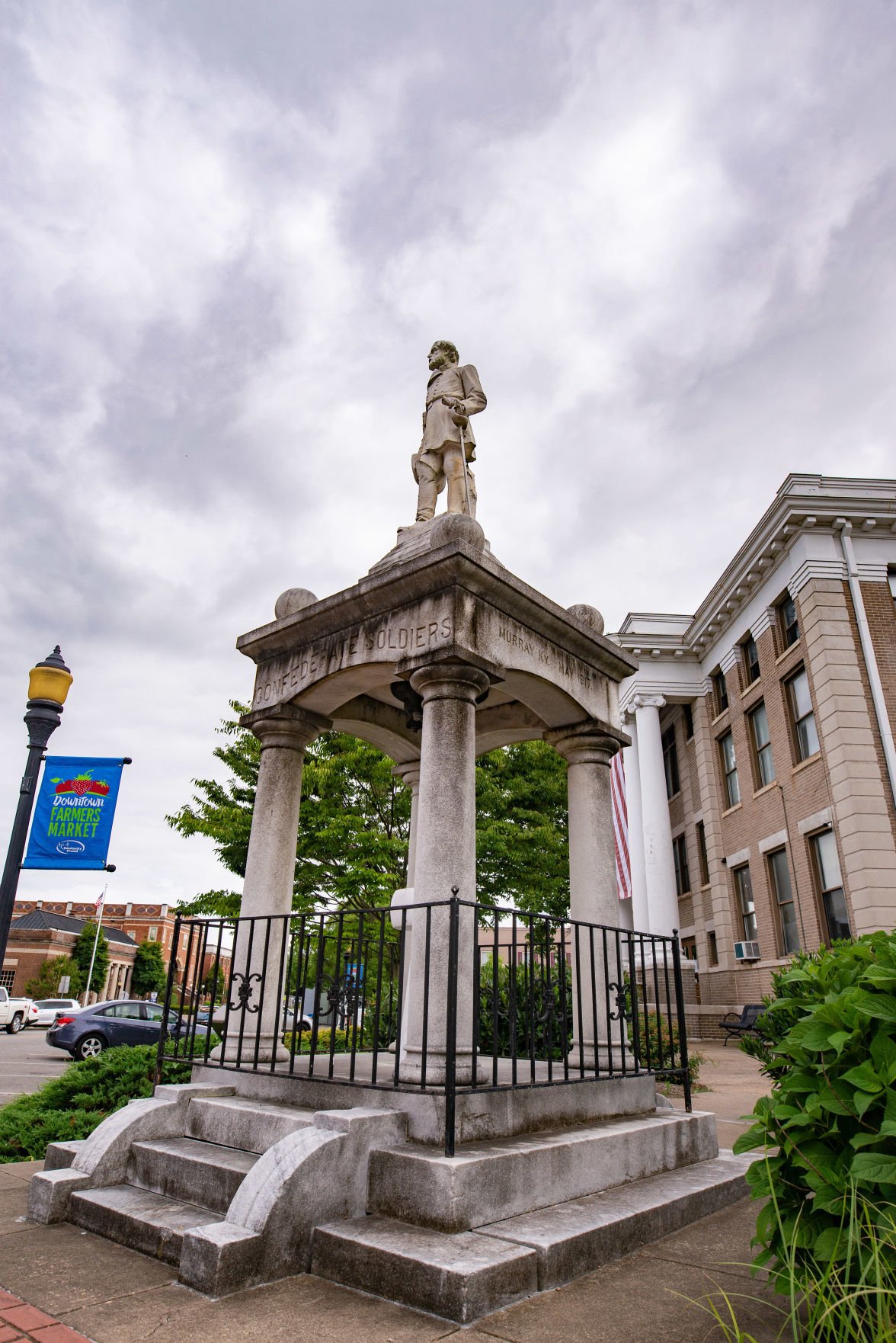 The “Confederate Soldiers” monument bearing a likeness of Confederate Gen. Robert E. Lee stands on the northeast corner of the Calloway County Courthouse lawn, where it’s stood for more than 100 years. Recent efforts to remove the statue have gained widespread support from within and outside the Murray community, but efforts are also facing some resistance.

A publicity photo in advance of unveiling the Robert E. Lee statue at the Calloway County Courthouse ran in the Murray Ledger in June 1917. The pictured photo is not identical but similar in essentials to the current statue, which has undergone some renovations since being installed.

The “Confederate Soldiers” monument bearing a likeness of Confederate Gen. Robert E. Lee stands on the northeast corner of the Calloway County Courthouse lawn, where it’s stood for more than 100 years. Recent efforts to remove the statue have gained widespread support from within and outside the Murray community, but efforts are also facing some resistance.

Between the 1890s and 1920s, Confederate monuments sprang up across America at rates far eclipsing any time before or since.

Active campaigns by Confederate heritage groups — among the influential of them the United Daughters of the Confederacy (U.D.C.) — convinced localities to erect memorials, many of them on public grounds, during an era that also featured strong segregation laws and disenfranchisement of minorities.

The monuments weren’t always without controversy, as some were denounced for glorifying traitors and slavery, but many found swift approval.

Kentucky never left the Union officially, but a few tens of thousands of soldiers from the commonwealth fought for the Confederacy and a provisional government tried to establish itself as a Confederate force. More than twice that many soldiers, potentially three times, fought for the United States, though historical estimates vary.

“This area tended to lean toward secession and the Confederacy,” said James Humphreys, who teaches history at Murray State University.

That Confederate heritage has moved front-and-center as a memorial in Murray featuring the likeness of Robert E. Lee has drawn strong criticism in recent weeks.

In 1913, coinciding with the building of a new courthouse in Calloway County, the J.N. Williams chapter of the U.D.C. sought permission to erect a monument to Confederate soldiers, topped with a likeness of the Confederate general on the lawn of the new building.

The price tag of around $2,500 — nearly $65,500 in today’s money, according to estimates — meant the chapter needed help raising the funds to erect the statue, and the Murray Ledger published multiple calls for help in the fundraising.

One such piece urged anyone in Murray with “any patriotism or any civic pride” to “get busy” and said every citizen in the county would be solicited for funds.

The article urged residents to “remember this will belong to you, then give as liberally as your conscience will allow.”

Another article noted that a “Confederate drinking fountain” had recently been erected at the courthouse in Cadiz, and “every contributor to this fund is as proud of it as a boy is of his first long pants.”

That monument, like Murray’s though it does not bear anyone’s likeness, is also listed on the National Register of Historic Places. It no longer stands on a courthouse lawn, as the former courthouse was demolished more than a decade ago.

The Murray chapter’s campaign brought in most of the funds needed for the monument, and the group secured permission in 1916 to erect the statue, which was delivered in 1917, according to The Ledger archives.

But the fundraising remained incomplete and, in 1918, the Calloway County Fiscal Court approved a $200 payment to be paid when the rest of the funds were raised, according to minutes from that meeting.

According to Humphreys, the erection of Confederate statues across the South is inextricably linked with the “lost cause” narrative, which sought to downplay slavery as a significant factor in secession and paint the South’s cause as noble but doomed.

“The lost cause tended to permeate most areas of white society,” Humphreys said, noting Murray is only a few miles from Tennessee, a Confederate state.

“There was a lot of racism. There was a lot of support for the Confederacy,” he said noting that the lost cause idea began to spring up shortly after the war, “promoted by confederate leaders who, almost as soon as the war was over, began to downplay the idea that slavery had been a big part of it.”

Of the 61 monuments designated under “Civil War Monuments of Kentucky” by the National Register of Historic Places, only eight honor union troops — one of those honors the dead from both sides of the conflict — and only one of those stands in specific memory of black fighters. Nine listed confederate monuments stand west of or in Cadiz, but the area contains no Union memorials on the list.

Thomas Hiter, an active member of Sons of Confederate Veterans chapters in Marshall and Calloway counties, decried the efforts even to move the monument.

“To go about breaking up and moving monuments because of current political philosophy … it’s breaking up history because you don’t like it now,” Hiter said.

He also said the era during which the statue was erected shouldn’t be an argument against the statue, as the war had been concluded decades prior and Northern and Southern politicians had “agreed to disagree” on the causes of the war.

“The war only became about slavery after the war,” Hiter said.

For Hiter, the statue is about reverence for his ancestors. Lee’s name is nowhere to be found on the statue, though it is included in documents and reports from the time and since.

But Hiter pointed out some of Lee’s public anti-slavery statements and said he doesn’t find Lee’s likeness offensive.

“It is the people of Calloway County’s property, not the professors of Murray State,” he said.

“They’ve got a political axe to grind and they’re grinding it on our statue.”

Calloway County Attorney Bryan Ernstberger has been tasked by the fiscal court with researching the ownership of the monument before the ruling body can determine whether to side with or against the removal efforts that have gained support from Murray State University, thousands of petition signers and the Murray City Council.

“Do they have the authority to (remove) it, and if so, what steps would it take,” Ernstberger asked in a recent interview.

The form petitioning for the monument to be placed on the National Register of Historic Places lists Calloway County as the owner, while the form requesting recognition by the Kentucky Military Heritage Commission lists the U.D.C.

The official U.D.C. website lists no active chapters in Kentucky, but recent coverage in local media indicates a chapter in Murray is still active.

Ernstberger said that, if it’s determined the county owns the statue, national and state officials likely wouldn’t put up a fight should the county decide in favor of removal.

But though the question of ownership needs settled first, Ernstberger said officials also need a way to “accurately measure” the feelings in the county.

And then there’s the question of paying for the removal itself, which Ernstberger said could come with a hefty price tag and makes the issue “more complicated” than many people realize.

“Fiscal court would love to take action one way or another. This is a cloud hanging over everything else we have to do.”

Murray High School history teacher Wesley Bolin said the issue of preservation of history can be complicated when it means preserving reminders of an inaccurate history.

He said he’s not in favor of destroying Confederate monuments, but that they would be better served in a historical context like a museum or a battlefield that could also present the realities of slavery.

“On the court square it’s an object of veneration. It’s a shrine … right now it’s a useless object for telling history,” Bolin said.

“I assign textbook reading for my students. I don’t assign statue pictures.”

Bolin sees the lost cause narrative as itself a “very successful effort to erase history.”

But for Hiter, removing the monument is just as bad as destroying it because it symbolizes what he sees as a prioritization of feelings over logic and history.

“You have to understand that those people wanted to honor their fathers and uncles and brothers, hundreds of whom died in defense of their families and their homes,” Hiter said.