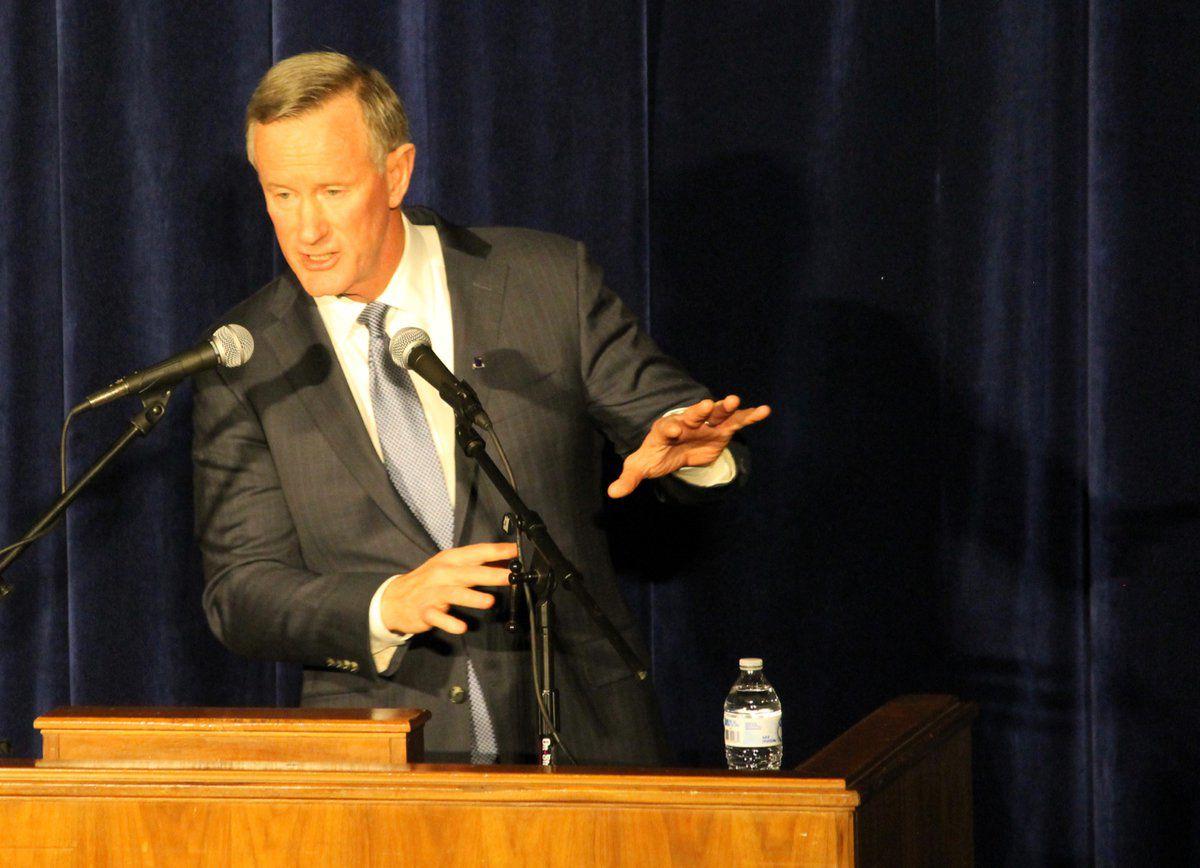 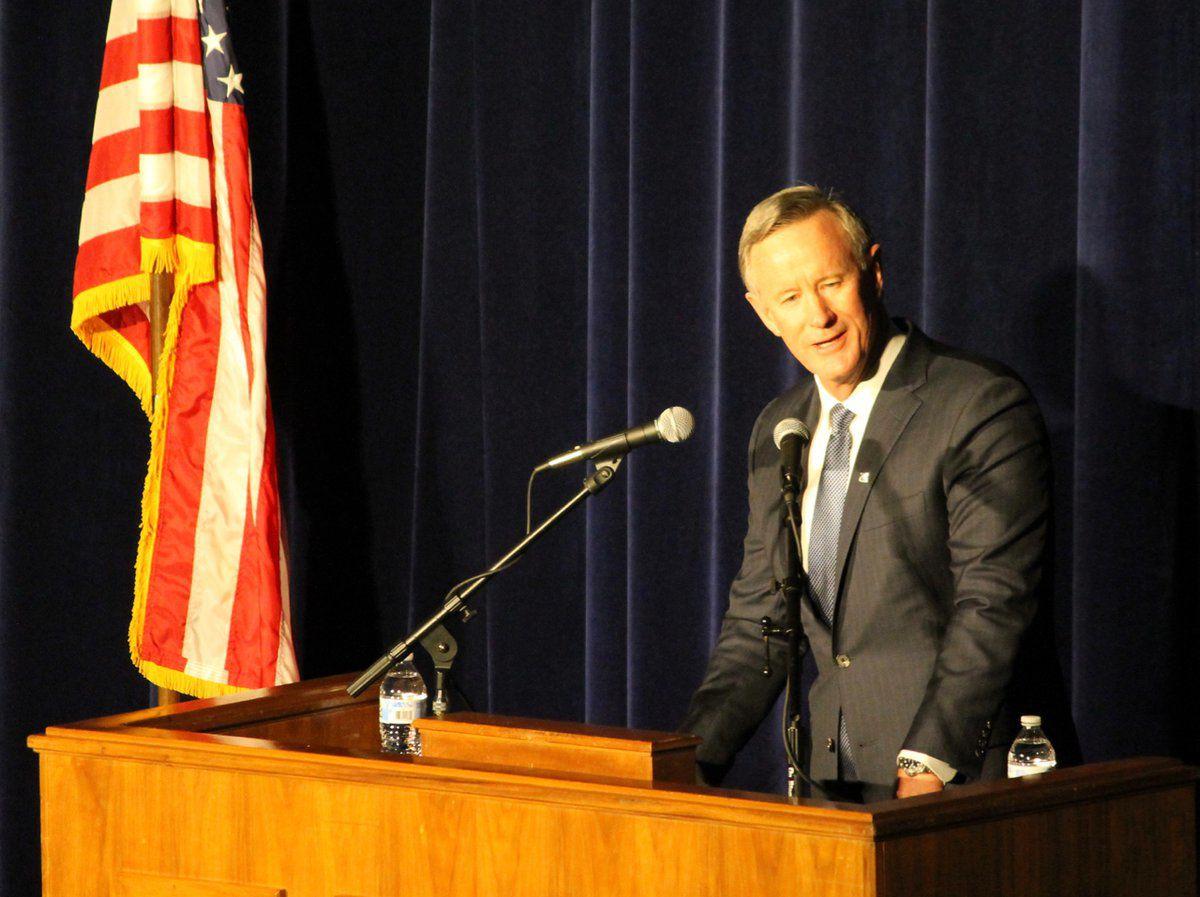 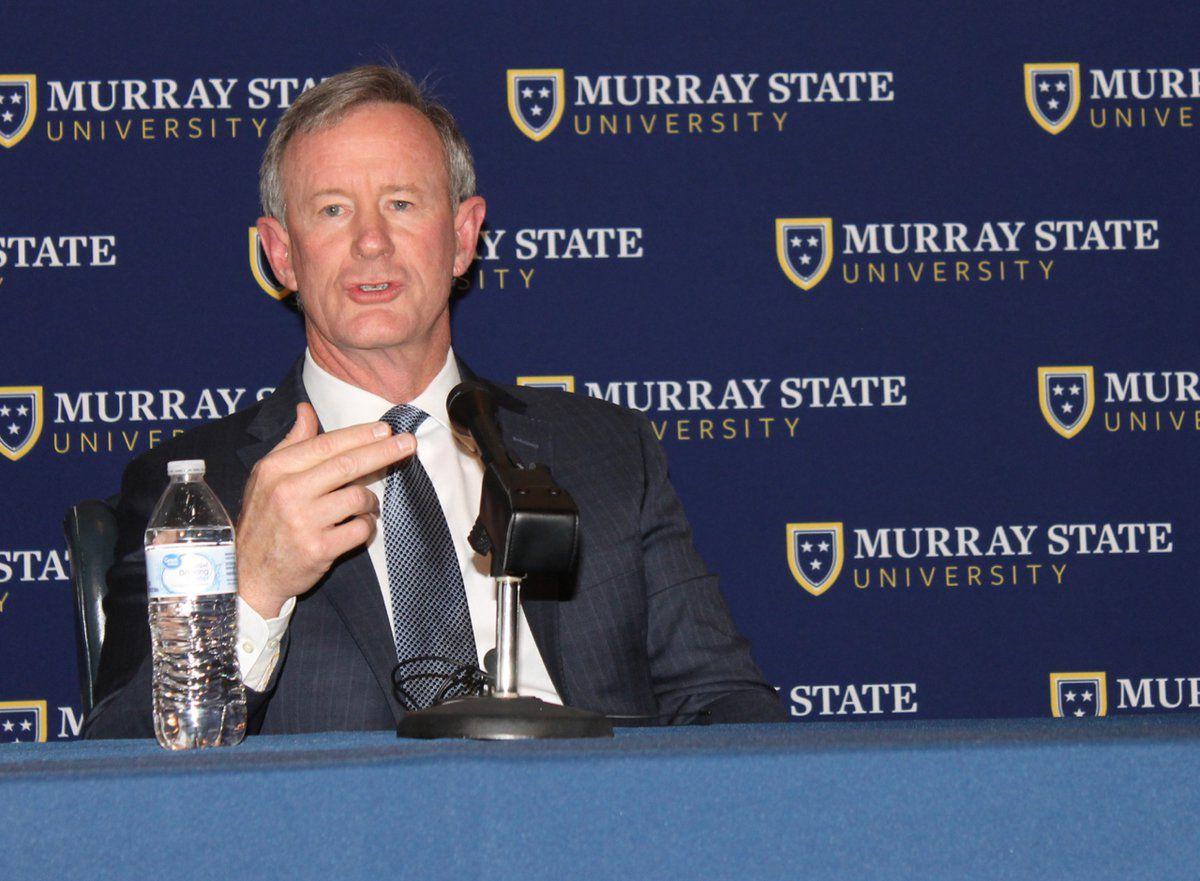 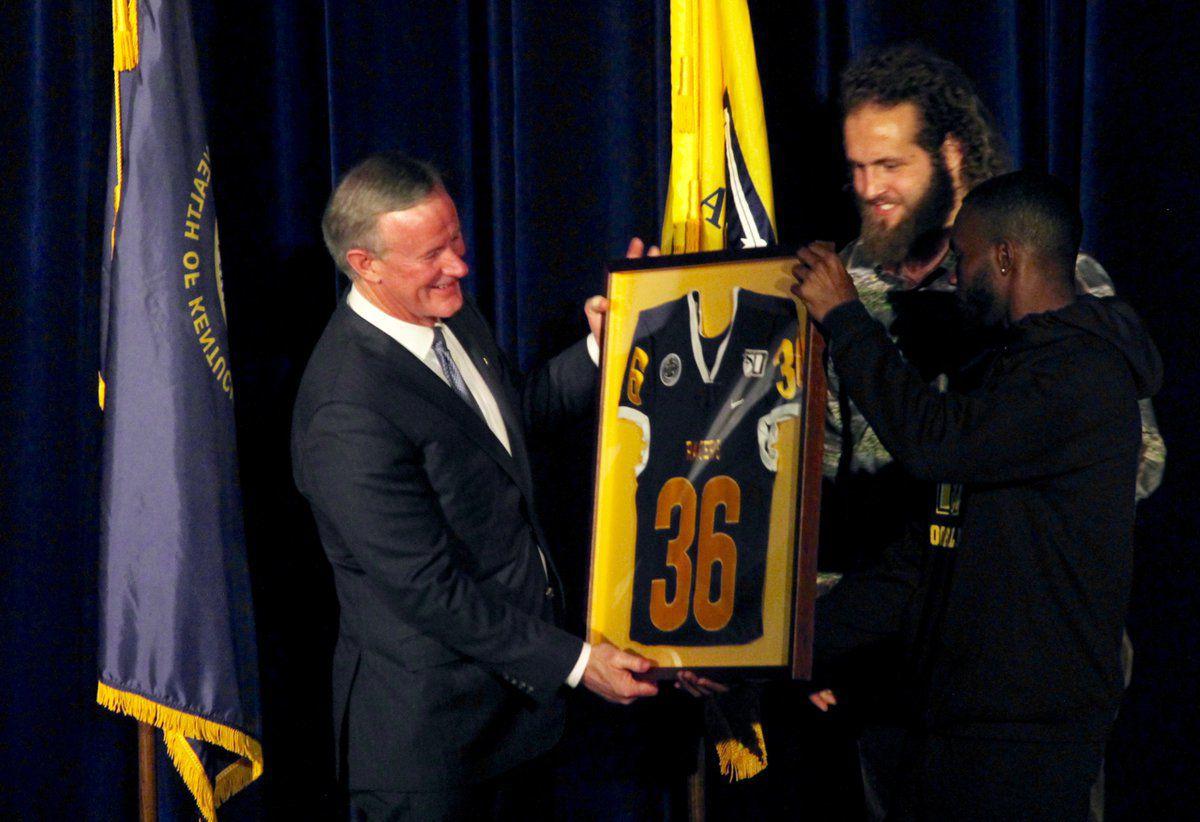 Retired four-star Adm. William H. McRaven is presented a commemorative Murray State University football jersey Thursday night by team members following his 2020 Presidential Lecture inside Lovett Auditorium. McRaven was given No. 36, the same number his father, Claude McRaven, wore as a member of the college's football team in the late 1930s. 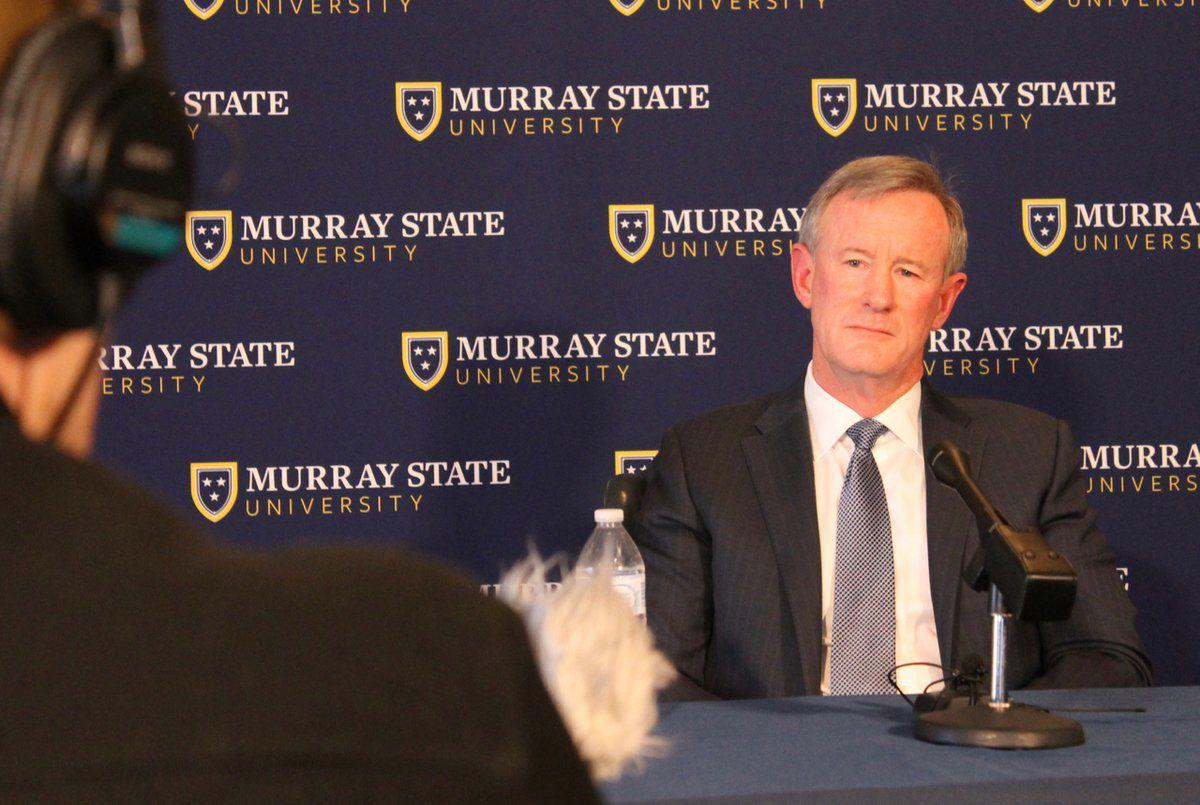 Retired four-star Adm. William H. McRaven is presented a commemorative Murray State University football jersey Thursday night by team members following his 2020 Presidential Lecture inside Lovett Auditorium. McRaven was given No. 36, the same number his father, Claude McRaven, wore as a member of the college's football team in the late 1930s.

Claude "Mac" McRaven, a 1939 alumnus, made a name for himself as a hall of fame athlete at then-Murray State Teachers College, an NFL halfback, a World War II fighter pilot and an Air Force colonel. But it was the values he formed in western Kentucky and passed along to his children that gave America one of its most accomplished military leaders of the late 20th and early 21st centuries.

"At Murray State, he learned to be a man, and he passed that on to me," the junior McRaven, who retired in 2014 after almost four decades in the U.S. Navy, told a packed Lovett Auditorium.

McRaven, 64, used his platform on the same stage from which his father graduated 81 years prior to share with the audience the values that guided him through a 37-year military career, as an advisor to two U.S. presidents and as a foreign policy expert. Drawing from a lifetime of unique experiences detailed in his No. 1 New York Times bestseller "Sea Stories," McRaven used real-life, often harrowing events to illustrate the hard-earned wisdom he hoped to impart on young college students in the crowd.

"Each and every one of you will have the opportunity to influence a young man or woman," he said.

McRaven compared the millennial generation with that of his father's, a generation born into World War I that overcame the Great Depression and World War II. Recalling his uneasy moments following an introduction to Brendan Marrocco, a quadruple amputee from combat in Iraq, McRaven dismissed labels like "pampered" and "snowflakes" that have been placed on today's young adults.

"I don't know if he could see sympathy or something in my eyes, but he looked at me and assured me, 'Sir, I'll be alright,'" he said.

As an admiral who has commanded 72,000 troops, he sees nothing in millennials to question their patriotism and strength.

"This generation is the next Greatest Generation," he added.

"It is truly an honor to have Adm. Bill McRaven, an American hero, speak at Murray State University for our Presidential Lecture Series," Jackson said.

Born in Pine Hurst, North Carolina, McRaven spent his formative years as a military brat in San Antonio. He attended the University of Texas at Austin where he earned a bachelor's degree in journalism in 1977. Later that year, he began his stellar military career as a commissioned officer in the U.S. Navy and volunteered for the Navy's elite SEAL team, the training for which he described as "six months in hell."

He saw combat in Desert Storm and in both Iraq and Afghanistan in the War on Terror following 9/11. He has commanded special forces at every level and eventually took charge of U.S. Special Operations Command, advising President George W. Bush and directing the capture of Iraq's longtime dictator in December 2003 and President Barack Obama in the mission he commanded to kill bin Laden eight years later.

Describing the tense discussions and high stakes leading up to the 2011 bin Laden raid in Pakistan, McRaven elicited an auditorium-wide cheer from the auditorium.

"We never once talked about politics. We talked about what was right for this country," he said, pausing for the ovation to fade. "In one of the boldest decisions of the modern era, there was no rancor. There were heated discussions, but they were not personal."

It was leading the bin Laden operation that made McRaven Time Magazine's runner-up for 2011 Person of the Year. In 2012, Foreign Policy magazine named McRaven one of the nation's Top 10 Foreign Policy Experts. Two years later, Politico cited the admiral's leadership in cutting through Washington bureaucracy in naming him one of the Politico 50. Among numerous other recognitions and honors, in 2018, he received the Judge William H. Webster Distinguished Service Award for his lifetime of service to the nation.

McRaven has been a vocal critic of President Donald J. Trump's foreign policy, issuing a stinging op-ed in the New York Times on Oct. 17, 2019. And he took a few moments at a press conference before Thursday's lecture to defend the virtues and alliances he believes have made America a beacon for democracy.

"We are at a point where the world is losing faith in the United States," he said in response to a question about Trump's policies. "It seems the only time we are prepared to do good is when it is good for us."

"His incivility is not a good example to set," he said.

But McRaven has no political ambitions of his own. In response to a question from the audience following Thursday's lecture, he made his intentions clear.

"I don't care for politics. I'm a little too blunt for politics," he explained, opening himself instead to a possible future role of policy advisor. "I would entertain that in the right administration."