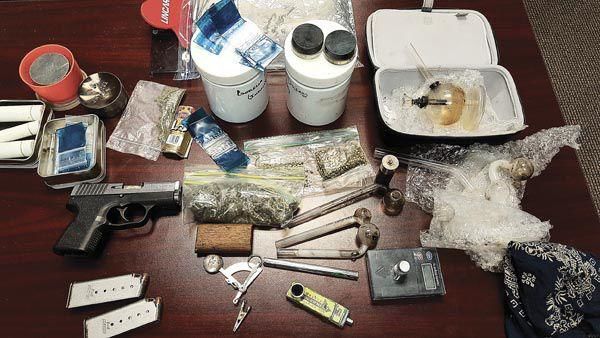 This assortment of drugs and drug paraphernalia was confiscated by the Caldwell County Sheriff’s Office in a 2017 arrest in Fredonia. The sheriff’s office and local drug court can help people end an addiction that can lead to death, as Kentucky ranks fifth in drug overdose deaths.

The annual DEA report stated that there were 1,566 drug overdose deaths in the state in 2019.

“Fentanyl and fentanyl analogues and manufactured synthetic opioids are our largest threat, followed by methamphetamine,” said Van Ingram, the executive director of the Kentucky Office of Drug Control Policy.

The magazine stated that the DEA report said that “(E)very year since 2011, (drug overdose deaths) have outnumbered deaths by firearms, motor vehicle crashes, suicide and homicide. In 2017, approximately 192 people died every day from drug poisoning.”

Caldwell Chief Deputy Chris Noel said that the county sheriff’s office has a number of programs that can help people find relief from a potentially fatal habit.

“We actually have resources that we provide to people that are either addicted to drugs or have drug-related issues,” he said. “We assist them in getting signed up or make sure that we assist them in communicating with other outside sources to help them with their addiction.

“We started a lockbox program, which is a lockbox here at the sheriff’s office to keep your drugs secured if there is an issue with a family member or people might come in or children might have access to your medication.”

Noel said the sheriff’s office also has a drug kit program, where a parent with concerns about their children using substances that they shouldn’t be using can come to the office to get a kit to test their children.

“We also have a dropbox outside the courthouse that we’ve had for several years,” Noel said. “If somebody has unused medication or medication that they know is not being used, we have that resource for anybody to bring their medication.”

Noel added that the sheriff’s office has several other resources to help people with drug problems.

“I’ve actually sat down with some people and said, ‘Here are some of the options and the places. Let’s sit down and call one of them, and I’ll sit here if you like and we’ll talk with them together and see about getting you help,’ ” he said. “Caldwell has the Pennyroyal Mental Health program. It’s a kind of an outpatient program with classes and counseling.”

Drug Court is another program aimed at helping people who have been arrested on drug charges shake drug habits. Drug court has been established in 113 of Kentucky’s 120 counties.

“For a felony charge, it’s an 18-month program,” said Doug Martin, the specialty court supervisor for the 56th Judicial District. “It’s kind of like probation. When they go for sentencing, the judge has to refer them for a Kentucky assessment. We run their records, and the assessment we have rates them on the severity of their drug addiction.

“After that, it’s a team effort. We have the commonwealth attorney’s office and different probation and parole (officers) on our staff, and we go through their records and decide whether or not to let them in.”

Martin said the program is very stringent, including meetings with Narcotics Anonymous or Alcoholics Anonymous. Participants also get information and treatment through Pennyroyal Mental Health Center.

More information about drug courts is available at kycourts.gov/programs/drugcourt.