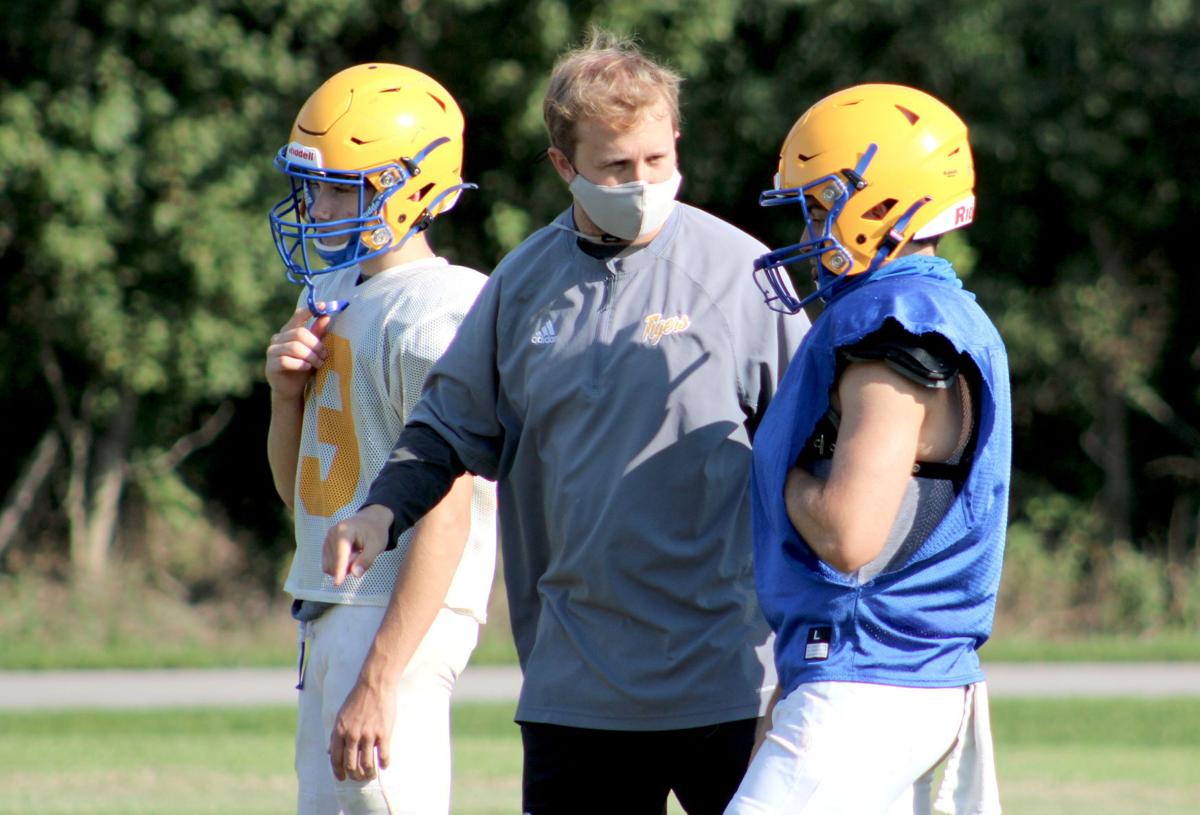 Above: First-year head coach Will Barnes speaks with players during a practice session on Monday. Left: Offense and defense meet at the line of scrimmage during a Caldwell County practice held Monday. 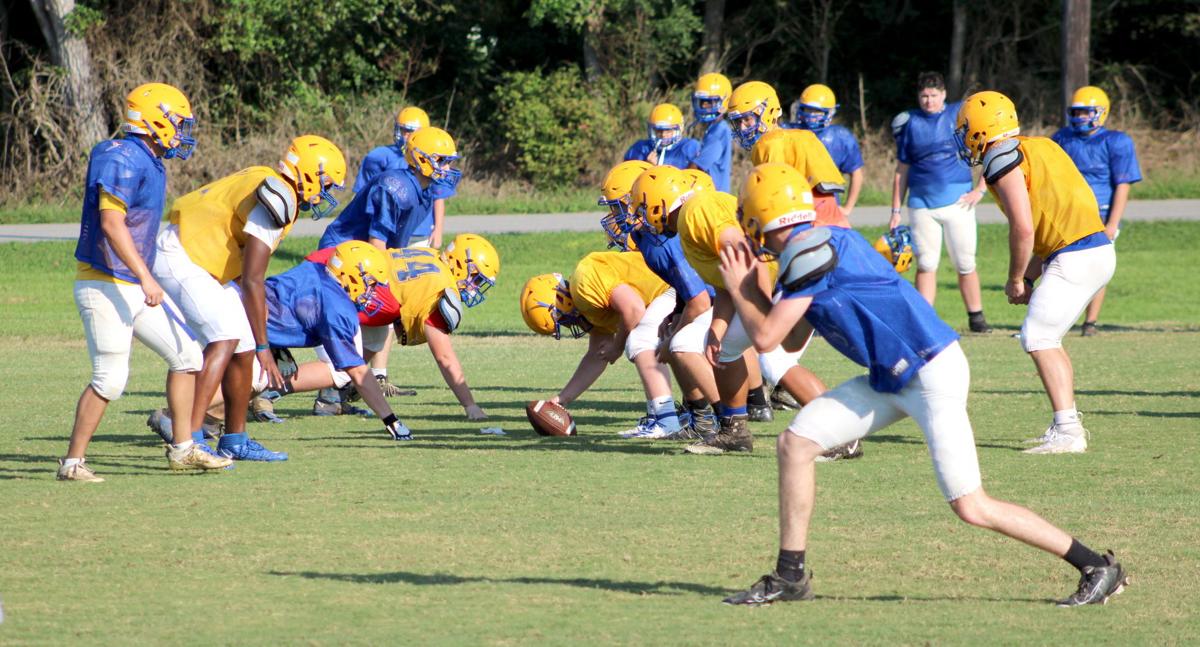 Offense and defense meet at the line of scrimmage during a Caldwell County practice held Monday. The Tigers hope to improve on last year’s 8-3 overall record and 3-1 Class 2A District 1 mark.

Above: First-year head coach Will Barnes speaks with players during a practice session on Monday. Left: Offense and defense meet at the line of scrimmage during a Caldwell County practice held Monday.

Offense and defense meet at the line of scrimmage during a Caldwell County practice held Monday. The Tigers hope to improve on last year’s 8-3 overall record and 3-1 Class 2A District 1 mark.

The COVID-19 pandemic has affected several aspects of life this year, and high school sports will not be an exception. From lessened capacity to temperature checks, people will need to make adjustments to help make this area safer for everyone.

One thing that will not be affected by the pandemic is the fact that Caldwell County football returns Friday from an 8-3 season in which it took part in postseason play, the 15th straight year for the Tigers to get to the playoffs.

Caldwell County went 3-1 in Class 2A District 1 last year, finishing in second place and falling to Murray 34-17 in the first round of the playoffs.

While Caldwell County has won 14 of the last 15 meetings, Crittenden County is a perennial participant in the playoffs, advancing to the state quarterfinals in each of the last three years. It is not a team to be overlooked.

The Tigers lost only five players to graduation last May, and while it is a small number of players, there was a lot of leadership in the Class of 2020.

“You look in that class, and we had a lot of production on both sides of the ball,” first-year head coach Will Barnes said. “Luke Stallins was an offensive lineman who was a three-year starter. You had DeEric Hollowell, who had a really good career and had a really good year last year at the running back position. Ben Holt was a guy that we used on offense, but he was mainly a defensive player, kind of the leader of our defense.

“You’re looking at three guys that played a big part in winning eight ballgames last year. It’s going to be difficult to replace that type of production and leadership, for sure.”

Hollowell was the top scorer for the Tigers last year, ranking fifth in Class 2A with 14.72 points per game. Other seniors from the 2019 Tiger squad include wide receivers Max Ashley and Aaron Ziobro.

This year’s Tigers offense will be guided by senior quarterback Russ Beshear, who ranked 10th in Class 2A with 141.4 passing yards per game. Junior Blake Vivrette ranked second in the state with 4.3 points after touchdown per game and had the second-highest kick percentage among the top 16 in the state, making 95.9% of his kicks.

“Russ has really worked hard in the offseason, doing stuff on his own,” Barnes said. “He really picked up when we got back where we left off in March. I think he’ll have a great year for us, throwing the ball and running the ball.

“We’ve got a lot of guys up front that have either played a lot of varsity football or started some varsity football games. All five of those guys that will start on the offensive line have started at one point or another, so we’re really going to lean heavily on them and their experience.”

Barnes said that there is a lot of depth at several offensive positions, plus younger players gaining experience.

On defense, junior Elijah Shaheen ranked fifth in the state last year with 8.5 sacks, while senior Travion Samuel tied for 12th with 5.5.

“Other than Max Ashley and Ben Holt, we’ve got everybody back on defense,” Barnes said. “I think our front seven is really where our strong point is right now.

“Elijah Shaheen had a really good year last year, as did Drew Davis. Angel Long is going to be playing defensive line this year; he’s an athletic kid. So, I think that D-line will be pretty solid.”

Barnes said the defensive linebacker spots return a lot of experience as well, with seniors Beshear and Tate VanHooser being sought to fill leadership roles.

Barnes said that the Crittenden County game will be a good test for the Tigers.

“They’ve got a really good program,” he said. “The main thing that I’ve been concerned with in the last couple of weeks is making sure we take care of what we’re supposed to do. If we can do that — make sure we’re good on offense, defense and special teams — with what we’re doing schematically and we play hard, at the end of the day, regardless of the outcome, I think we can be satisfied with what we put out there.

Senior running back Xander Tabor will be an offensive standout for the Rockets, while junior quarterback Luke Crider will keep the Tiger defensive secondary on the move.

“We’ve got to come out with a good tempo, dictate the pace and be able to run the football like we always want to try,” Barnes said. “If we also limit turnovers and penalties, I think we’ll be OK.”

Barnes takes the reins of the team a year after his father, David Barnes, passed after guiding Caldwell County to a record of 110-50 over 13 seasons, each ending with a postseason berth.

“It’s exciting,” Will Barnes said of coaching his first game as a head coach. “Especially with everything going on, it’s been kind of crazy figuring out the logistics of it. But, on Friday night at 7, when the lights turn on, it’s another football game.

“I’ve been around with Dad for a long time, so having those experiences have helped. … Once the game kicks off, that’s the thing I’m looking forward to. I’m ready for Friday.”

The Tigers currently sport an eight-game schedule, with the season starting later than usual due to COVID-19 concerns and the canceling of the Fort Campbell game — a district contest — due to COVID concerns.

After Crittenden County, Caldwell County visits Union County on Sept. 18 before returning home on Sept. 25 to play its district opener against Ballard Memorial. The Tigers then visit district rival Mayfield on Oct. 2 and close district play on Oct. 16 at home against Murray.

Caldwell County visits Madisonville-North Hopkins on Oct. 23 before closing its regular season at home against Trigg County on Oct. 30 and at Christian County on Nov. 6.

Tiger coaches are hoping to find an opponent to fill the Oct. 9 slot left open when Fort Campbell canceled its fall sports.