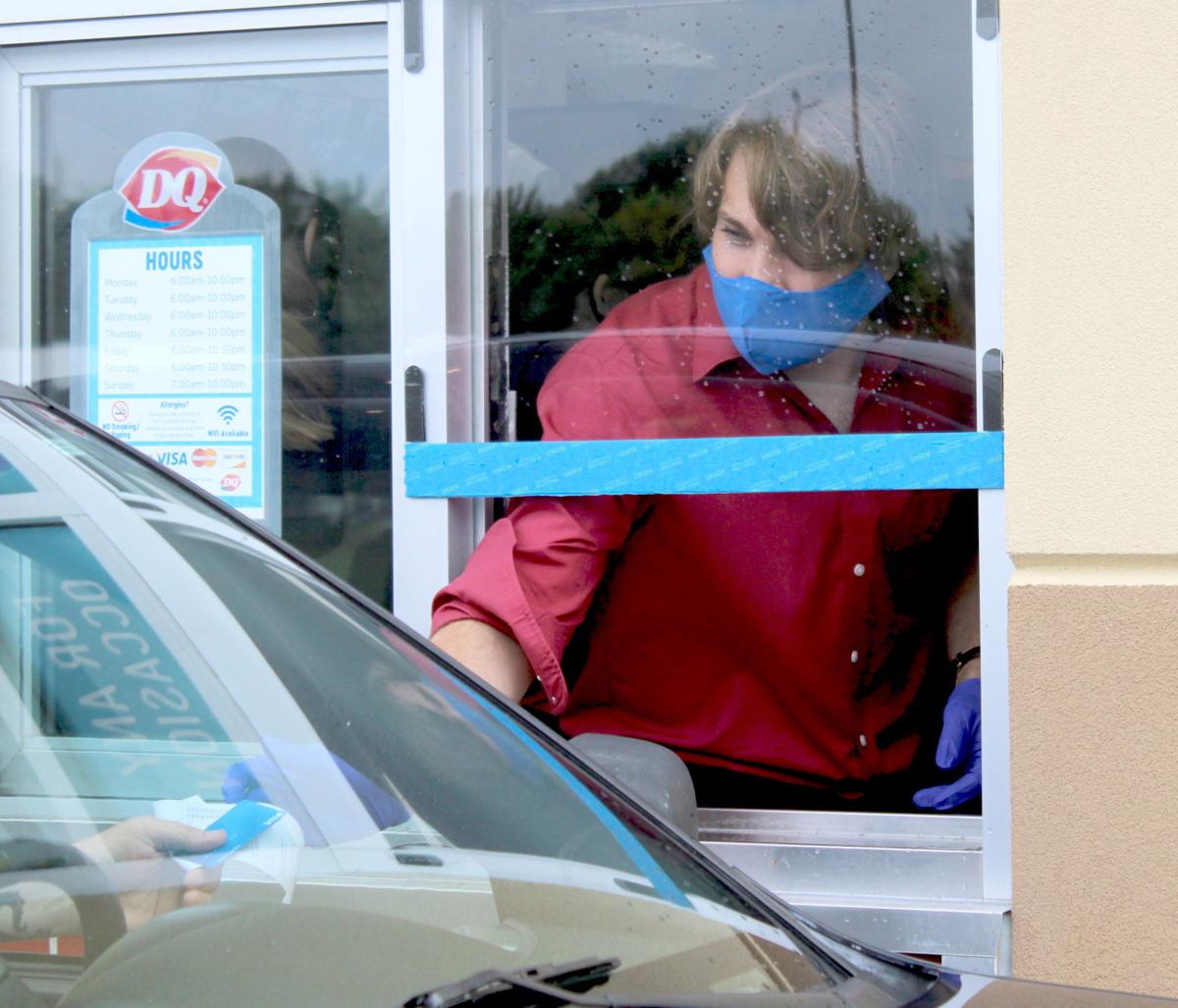 Princeton Mayor Kota Young takes a turn at the drive-thru window of the Dairy Queen that opened for business on June 30. 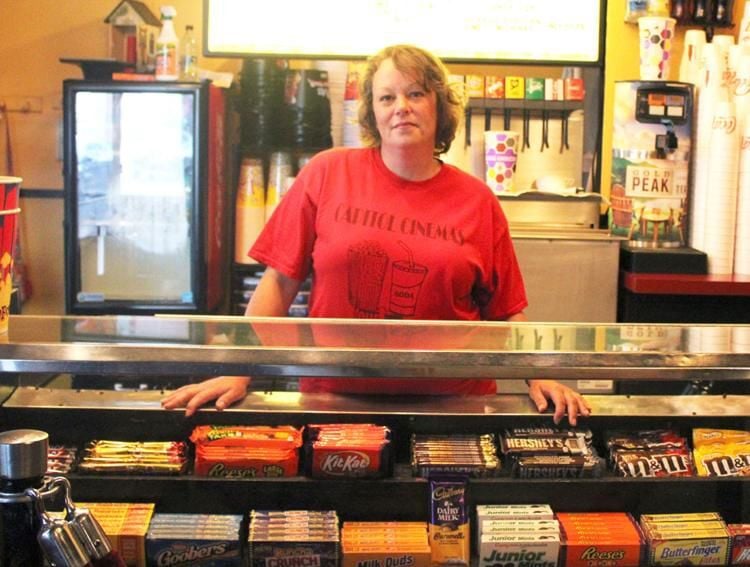 Heidi Boyd poses behind the concessions counter at the Capitol Cinemas theater the week before the city landmark closed its doors. The theater dates back to 1939. 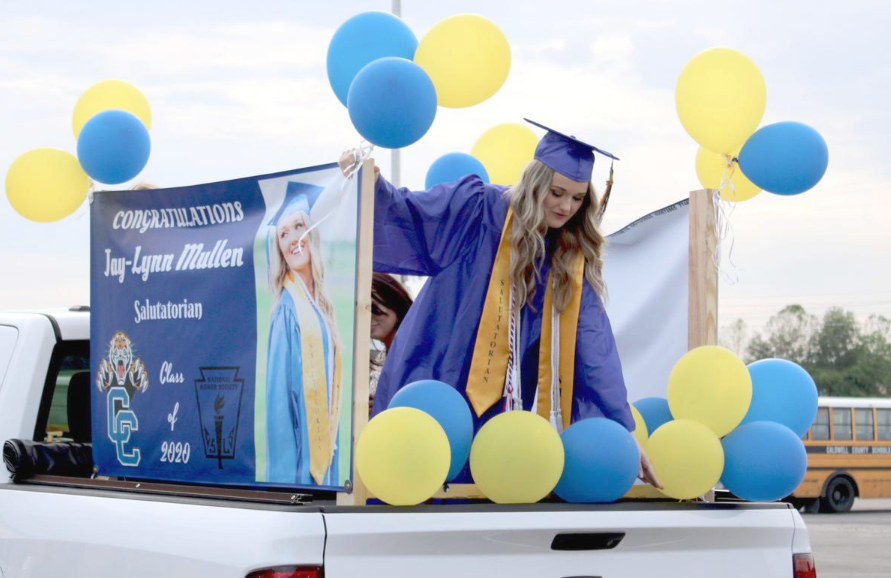 Jay-Lynn Mullen hops out of the back of a pickup truck to take part in the CCHS Class of 2020 graduation ceremony on May 22. Because of COVID-19 concerns, a traditional ceremony was not allowed, but two videos and a parade made this graduation even better. 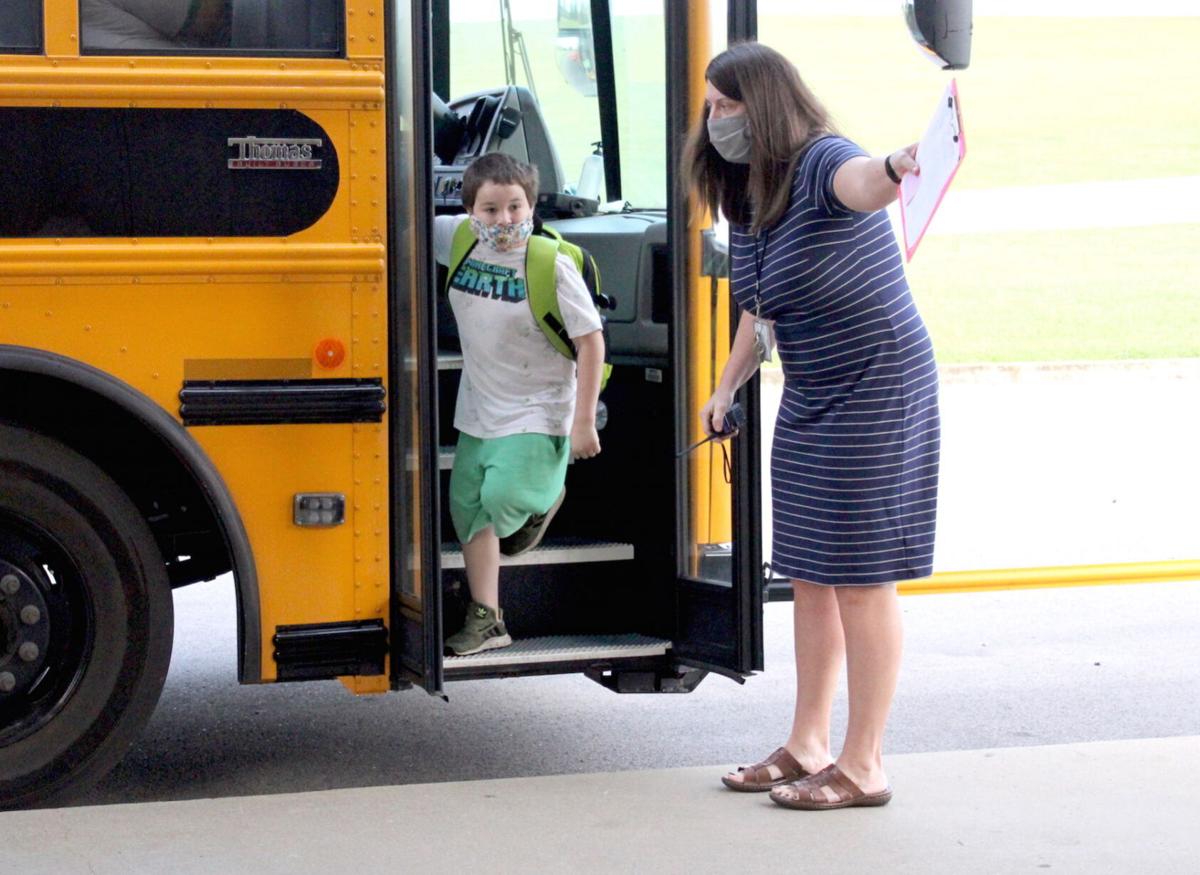 Dawson Harris, a fifth-grader at Caldwell County Elementary School, gets directions from CCES Principal Malissa Thomas as he gets off the bus for his first day of school on Sept. 14. Through the district’s hybrid plan, those students taking in-school instruction had their first days of school Monday or Tuesday.

Princeton Mayor Kota Young takes a turn at the drive-thru window of the Dairy Queen that opened for business on June 30.

Heidi Boyd poses behind the concessions counter at the Capitol Cinemas theater the week before the city landmark closed its doors. The theater dates back to 1939.

Jay-Lynn Mullen hops out of the back of a pickup truck to take part in the CCHS Class of 2020 graduation ceremony on May 22. Because of COVID-19 concerns, a traditional ceremony was not allowed, but two videos and a parade made this graduation even better.

Dawson Harris, a fifth-grader at Caldwell County Elementary School, gets directions from CCES Principal Malissa Thomas as he gets off the bus for his first day of school on Sept. 14. Through the district’s hybrid plan, those students taking in-school instruction had their first days of school Monday or Tuesday.

How ironic it was that a number used to indicate perfect vision could also name a year that was so out of focus, so chaotic and, frankly, wonky.

The year that will not be named here has had its downs and downs, from COVID-19 to Election Day (Week? Month?) mayhem. Any positivity must be credited to those who refused to let a year that is the poster child for Murphy’s Law make them miserable for the entire 366 days.

The staff at the Times Leader voted on their top local stories of the year. Each first-place vote got 10 points, second-place votes got nine points and so on. Here are our top 10 stories and honorable mentions, with total points given.

1. Superintendent Nate Huggins plagiarizes, then retires (29 points)The former Caldwell County School District superintendent had just taken office in July 2018 — not quite halfway through a four-year contract — when trouble arose in writing a letter to congratulate the Class of 2020 for the Times Leader’s May 13 graduation section. It was discovered that he had plagiarized the letter from a Georgia superintendent.

Huggins admitted to the plagiarism and published another letter of congratulations in the May 30 issue of the newspaper.

He submitted his letter of retirement to the school board on June 15, effective Sept. 1. The board approved Caldwell County native Heath Cartwright to serve as the interim superintendent, a position he held in the McCracken County school system the year before.

“As the top educator in this school district, I’ve got to be in a situation where there’s no question about what’s going on,” Huggins told the board after submitting his letter of retirement. “And I didn’t give credit where I should have given credit to a person that wrote an article, and I’m deeply sorry for that. This is the best action for our school district, for me to retire.”

Owner Heidi Boyd announced on the theater’s Facebook page that the economic atmosphere of running the business in a world of streaming and on-demand services has left the age of the projector and silver screen behind.

While the COVID-19 pandemic was not the sole cause, it was a contributing factor in Boyd’s decision. The state’s economic shutdown closed the three-screen theater for three months beginning in March. Capitol Cinemas reopened June 5, but attendance has been sporadic and costs to keep things running have increased.

“It didn’t help, that’s for sure,” she said of the pandemic. “Business was way down before (the pandemic). This is the straw that broke the camel’s back.”

3a. Will Barnes succeeds his father as CCHS football head coach (14)When Caldwell County High School football coach David Barnes passed away in August 2019 at the age of 59, it was a shock to several longstanding Tiger fans. Waynee McGowan served as the interim coach for the 2019 season before Barnes’ son Will was named as the permanent head coach on Dec. 18.

During the 2019 season, Will Barnes was inducted into the CCHS Hall of Fame as a three-year starter at quarterback.

Will Barnes won his first game as a head coach, shutting out visiting Crittenden County 22-0 en route to a 3-4 COVID-affected season. The Tigers fell by one point at perennial state championship contender Mayfield, lost to state semifinalist Murray in overtime in Princeton, then fell at Murray in the first round of the playoffs by one touchdown.

3b. CCHS graduation parade, ceremony defies COVID-19 (14)When COVID-19 prevented a traditional graduation ceremony from happening, the seniors made the best of a bad deal and made it even better. The graduates rode in parade fashion through Princeton, around the schools and lined up to receive their diplomas in a drive-up graduation ceremony.

Seniors got out of their vehicles in caps and gowns, walked up a ramp to a platform in front of the high school, picked up their diplomas, posed for photos and walked down another ramp.

Valedictorians’ speeches highlighted a graduation video that was made available to family and friends online, and another video featured the Graduation Day pomp and circumstance.

In her speech, co-valedictorian Reagan McCalister pointed to the disruption caused by COVID-19 and the fact that the class saw it through to graduation.

“How many other classes can say that they’ve gone through all that we have? None,” she said. “That’s what makes us unique. That is what’s going to give us an edge on everyone and everything we encounter for the rest of our lives.”

Geronimo Energy, a solar energy company based in Minneapolis, would set up the project in western Caldwell County, near Fredonia. The announcement was made by Magistrate Jeff Boone on Feb. 25 at the Caldwell Fiscal Court meeting.

Boone said he and Caldwell Property Valuation Administrator Ronald Wood met with Geronimo Energy on Monday to discuss the project.

“There are probably six or eight landowners who are going to be involved with leasing about 1,000 acres to them,” he told the court. “(There is a) $200 million investment on (Geronimo’s) behalf.”

Boone said the $200 million investment would have “a significant impact” on Caldwell County in terms of tax revenue for the county.

“Probably more so than Bremner was when they came to town,” he said of the baked goods company that opened in Princeton in March 1993. Bremner was sold in 2015 and the facility was bought by TreeHouse Foods in 2016.

5b. Dairy Queen opens in Princeton (13)For the first time since 2008, Princeton has a Dairy Queen restaurant. Using its modern “Grill & Chill” design, the restaurant opened on June 30 on Marion Road near the I-69 interchange.

Dairy Queen’s last run in Princeton was from 1979 to 2008, and a return of the restaurant was a fan favorite to residents.

The new restaurant opened on June 30 and had a ribbon-cutting ceremony, but plans to have a grand opening event when COVID conditions warrant.

7. Dead body found in shallow grave in Fredonia (11)The body of a partially-clothed woman was found June 13 in a shallow grave in a cemetery near Fredonia. According to The Crittenden Press, the person was described as a young to middle-aged woman whose body was found by a caretaker mowing the grass at Hill Cemetery off Ky. 91 in northwestern Caldwell County between Fredonia and Princeton.

The woman’s husband, Lawrence “Larry” Florentine, 52, of Rock Hill, South Carolina, was charged with murder on July 24 by Kentucky State Police with murder and domestic violence. The victim was identified as 36-year-old Nicole Zahnd “Nikki” Florentine. The date of her death was determined as June 7.

The man turned himself in June 23 to Denver Police Department in Colorado, where he once lived. He was released on a $25,000 bond on July 23, but was picked up the next day in Douglas County just south of Denver and jailed on the new Kentucky murder warrant.

Authorities did not release a cause of death for the mother of four, and no information was provided on why the couple was in western Kentucky. However, a family member told The Times Leader that Nikki Florentine had been shot and her body burned.

An obituary for Florentine listed her hometown as Williamsburg, South Carolina, more than 100 miles west of Rock Hill near the border with Georgia.

8. School schedules affected by COVID-19 (10)When COVID-19 hit the United States in March, schools were closed to the public, while students finished the school learn with at-home instruction, also called non-traditional instruction or virtual instruction.

Before schools reopened for the 2020-21 school year, area districts devised plans as to how to accommodate students whose parents did not want them back in the classrooms and those who did.

The Caldwell County School District devised a hybrid plan, with half of the students whose parents wanted them back in the classroom attending on Monday and Wednesday and the other half attending on Tuesday and Thursday, Friday would be an at-home day for all students.

9. CCHS volleyball wins region, hosts state tournament match (9)The Caldwell County volleyball team swept through its District 7 regular-season schedule and postseason tournament, shut out Henderson County in the first round of the Second Region tournament and swept the rest of the competition to win the region title.

Because of COVID-19 concerns, champions of even-numbered regions hosted the first round of the KHSAA state tournament, where the Lady Tigers fell to First Region champ McCracken County.

The overuse of the word “sweep” is not inappropriate, as CCHS recorded 15 shutouts among its 19 wins, including four blankings of district rival Madisonville-North Hopkins, with the fourth shutout bringing the regional title with it.

10. Variety of voting methods in general election (8)With concerns about being around a group of people making voters susceptible to catching the novel coronavirus, election officials across the nation worked on finding ways for people to cast their ballots without getting sick.

Voting machines were available at the courthouse on Election Day on the main and bottom floors, and three precincts were open in the county to all voters.

Matt Smothers murdered; wife accusedPrinceton native Matt Smothers, 43, was found stabbed to death on Jan. 8. His estranged wife, Kimberly Smothers, 42, was charged with murder. A pretrial conference is scheduled for Feb. 2, with a trial date set for Sept. 20.

Testing is still ongoing by appointment only by calling 270-365-0428. Testing generally begins at 4 p.m. on weekdays, but will begin at 2 p.m. on Thursday and will not be available on Friday.

Second Amendment Sanctuary movementA local organization called Caldwell County 2A in January sought to have the county named a Second Amendment sanctuary county. That designation would shield gun-owners from “red flag” laws that deal with gun control and restrictions on the amount of ammunition a person could have. The Caldwell Fiscal Court passed a resolution that stated that it supports the Second Amendment.