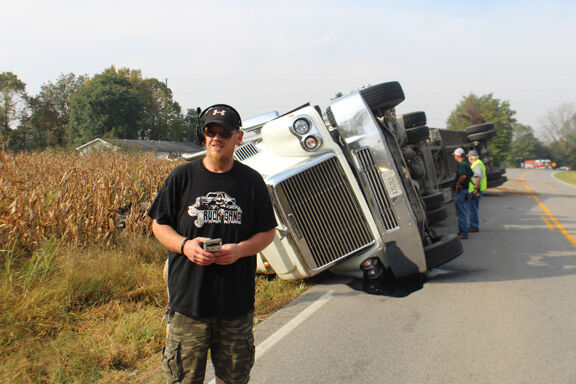 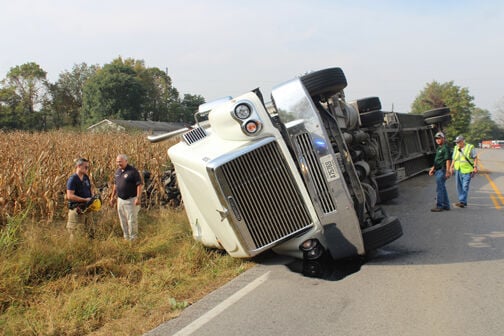 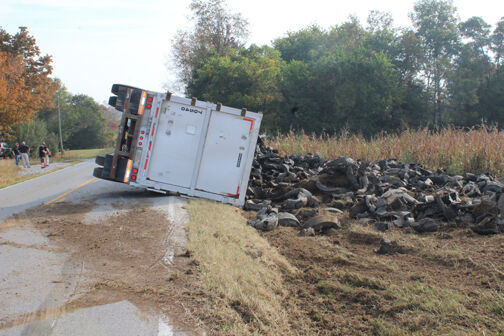 (Friday, Oct. 9) A semi-tractor trailer truck overturned on Ky. Highway 91 North, near Skinframe Road in Caldwell County at mid-morning Friday. No injuries were reported in the single-vehicle accident.

Jimmy Maulding, the driver, was hauling tire shreds. “I was taking them down to the landfill in White Plains, Ky., to dispose of them,” he said. “I came around the curve and I don’t know, my trailer went over and landed on my duals (double wheels). When it hit the duals, it just locked my whole duals up and there just wasn’t anything I could do. I don’t know if something on the trailer broke or what.”

Asked how he came out of the accident without a scratch, he smiled broadly and said, “The good Lord, I guess, and the seat belt.”

Emergency personnel reached the scene of the accident quickly. “We’ve notified the state highway department because one lane’s going to be shut down for a while,” said Princeton Fire Department Chief Brent Francis, at the scene. “At some point today, both lanes will be shut down, when the wreckers get here to start the recovery effort. So, people need to avoid (Ky. Highway) 91 North just before Skinframe Creek Road. It will be several hours before this is cleaned up and gone.”

Chief Francis noted, “We had (a wreck) yesterday, less than a hundred yards behind this truck. This is a bad spot, for some reason. There’s just enough of a slope and the edge of the road is pretty sharp. We have a lot of accidents right here. So, everybody needs to be careful, when they come around this curve.”