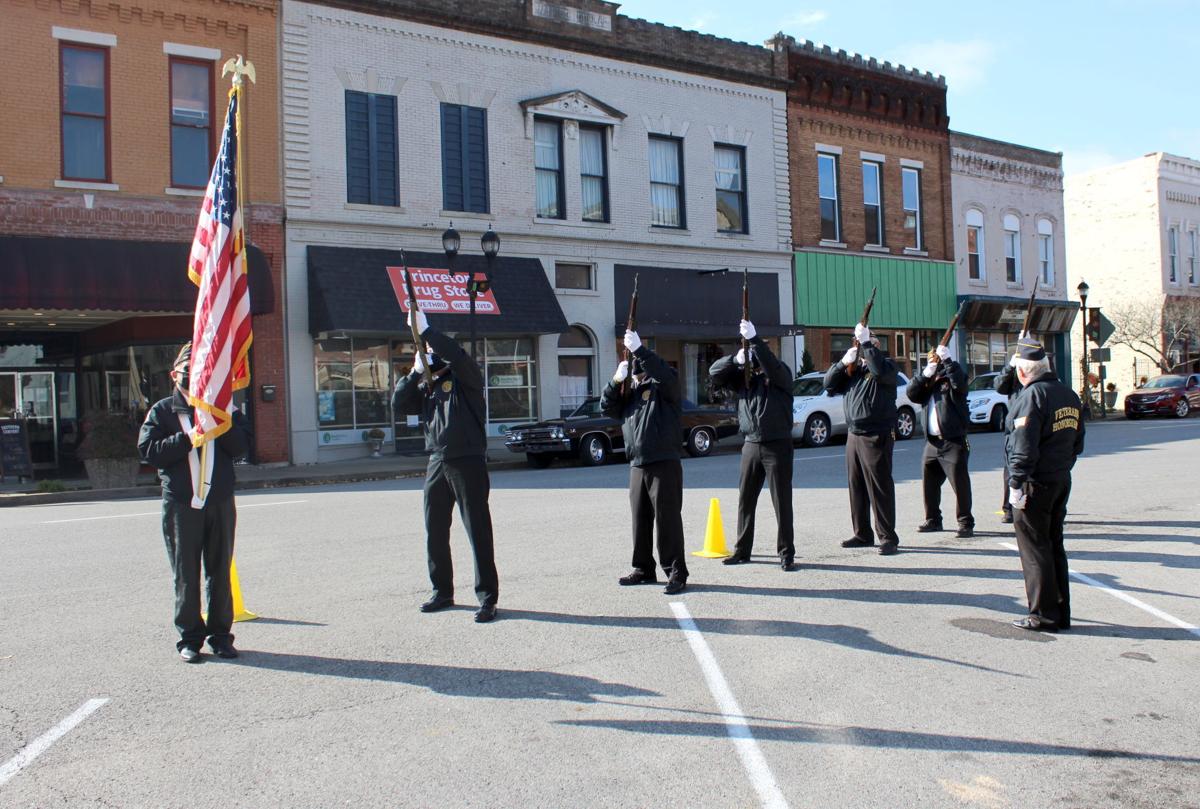 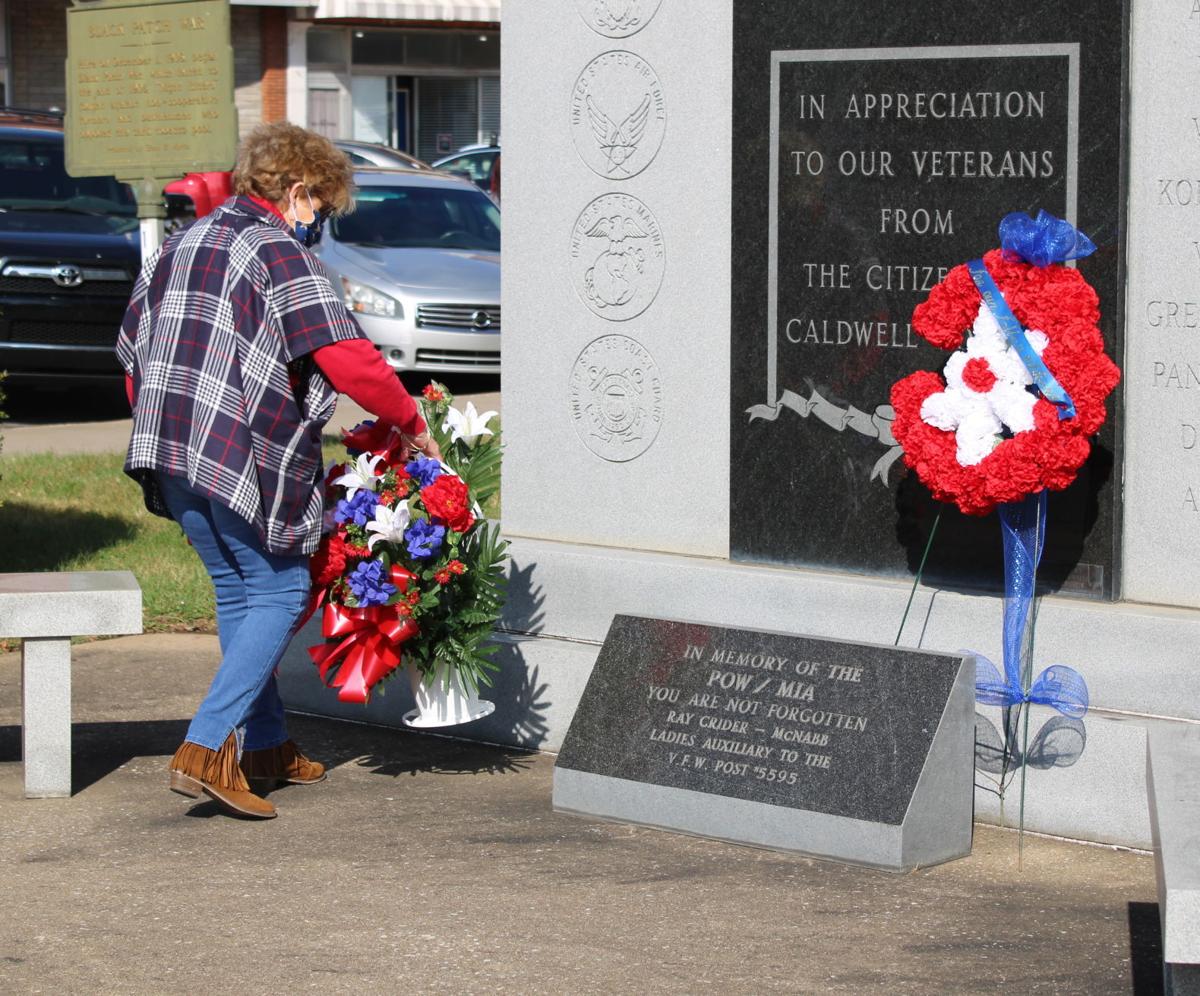 Bobbie White of Ray-Crider-McNabb Veterans of Foreign Wars Post 5595 Auxiliary presents a wreath at the Caldwell County Veterans Memorial during the Veterans Day ceremony held Wednesday at the courthouse in honor of local veterans who gave their lives in defense of this country.

Bobbie White of Ray-Crider-McNabb Veterans of Foreign Wars Post 5595 Auxiliary presents a wreath at the Caldwell County Veterans Memorial during the Veterans Day ceremony held Wednesday at the courthouse in honor of local veterans who gave their lives in defense of this country.

Commander Mary Byard of Ray-Crider-McNabb Veterans of Foreign Wars Post 5595 served as the emcee of the program. Chaplain George Barber of VFW Post 5595 opened the ceremony with a prayer.

Princeton Mayor Kota Young, Caldwell County Clerk Toni Watson and Caldwell County Attorney Roy Massey IV each spoke on the importance of Veterans Day for the nation and for themselves.

“From the bottom of my heart and on behalf of a grateful city, thank you,” Young said. “Thank you for service, for your sacrifice, for your family’s sacrifice. You have earned your place as American heroes through your blood, sweat and tears, along with all the enduring glory and honor you so richly deserve.

Watson spoke to the history of veterans and what that meant to her.

“I know how proud I am of veterans in my family that served,” she said. “I had a grandfather that served in World War I stateside. My father, John Laceon Watson, served in the South Pacific during World War II; his name hangs on the roll at the VFW.

“…My son served eight years in the Army Reserves. His unit was on active duty during Desert Storm. His unit was not called up, but I know how proud I was of him that he was ready to serve and to uphold the oath that he had taken. During those days, I prayed double-time, not knowing what was going to happen, and it made me realize just what my mother, my grandmother and my aunts went through during the war.”

Massey spoke of the pride we should have for those who choose to serve and what kind of a person it takes to make that choice.

“It takes a special, special individual — almost a calling — for someone to decide to serve our country,” he said. “…I myself, the citizens of Caldwell County, our state, our country — we each owe the freedoms that we have today, tomorrow and the future to veterans just like those standing among us this afternoon. I simply want to say ‘Thank you for your service in the past, present and in the future’ on behalf of myself, my family and the county attorney and all the citizens of Caldwell County.

“There is a quote from George Washington that I want to leave you with, and I think this best says how Veterans Day should be memorialized. He read, ‘The willingness with which our young people are likely to serve in any war — no matter how justified — shall be directly proportional to how they perceive the veterans of earlier wars were treated and appreciated by their nation of fellow men.’ ”

Bobbie White of the VFW Post 5595 Auxiliary presented a wreath to the Caldwell County Veterans Memorial. The honor guard fired an 18-gun salute in honor of all veterans past and present, and Richard Faughn of VFW Post 5595 played taps.

Veterans Day is held on Nov. 11 of each year, the anniversary of the signing of the armistice that ended World War I, signed that date in 1918 at 11 a.m. Veterans Day serves to honor all U.S. military veterans.

The holiday originally honored veterans from World War I, but in 1945, World War II veteran Raymond Weeks of Birmingham, Alabama, had the idea to expand Armistice Day to celebrate all veterans, not just those who died in World War I. Weeks led the first national celebration in 1947 in Alabama and annually until his death in 1985.

A bill making Veterans Day a federal holiday passed through Congress in 1954, renaming the day Veterans Day in place of Armistice Day.

In 1971, in coordination with the Uniform Monday Holiday Act, Veterans Day was moved to the fourth Monday in October, but in 1978, it was moved back to its original date of Nov. 11.