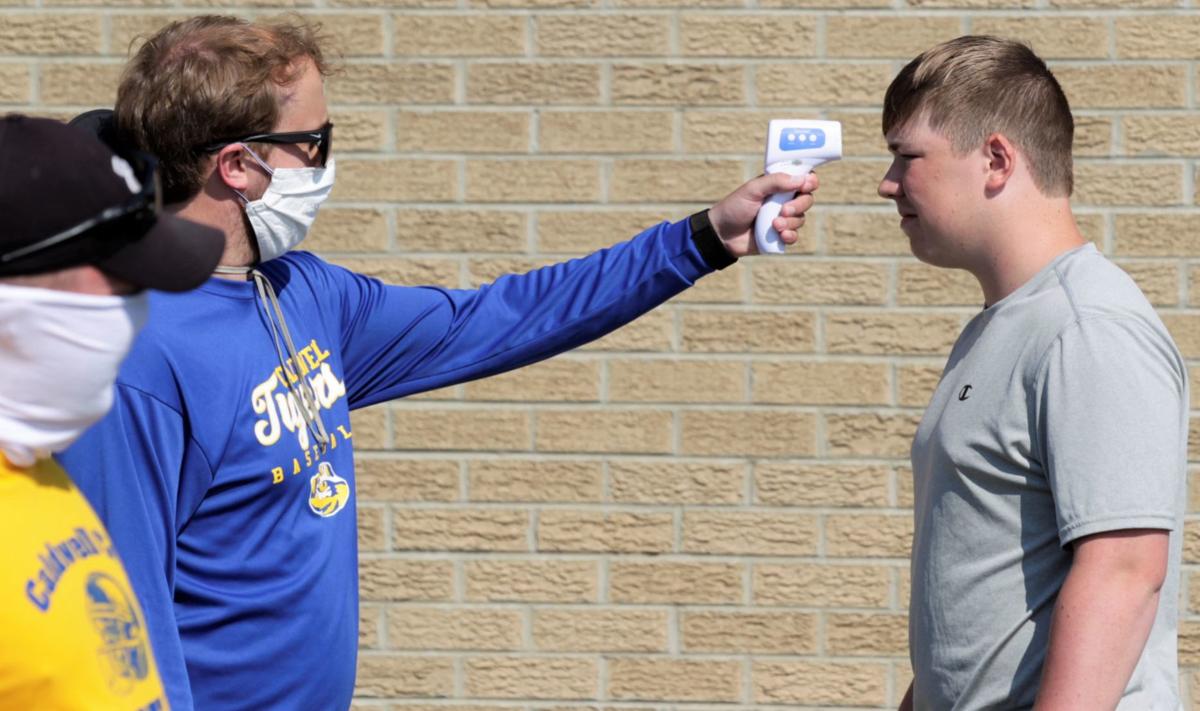 Prior to football practices at Caldwell County High School, Tigers coach Will Barnes (left) must administer a temperature check to all players and staff before they take the field in small groups. Any temperature registering at or above 100.4 degrees is noted as a potential symptom for sickness. 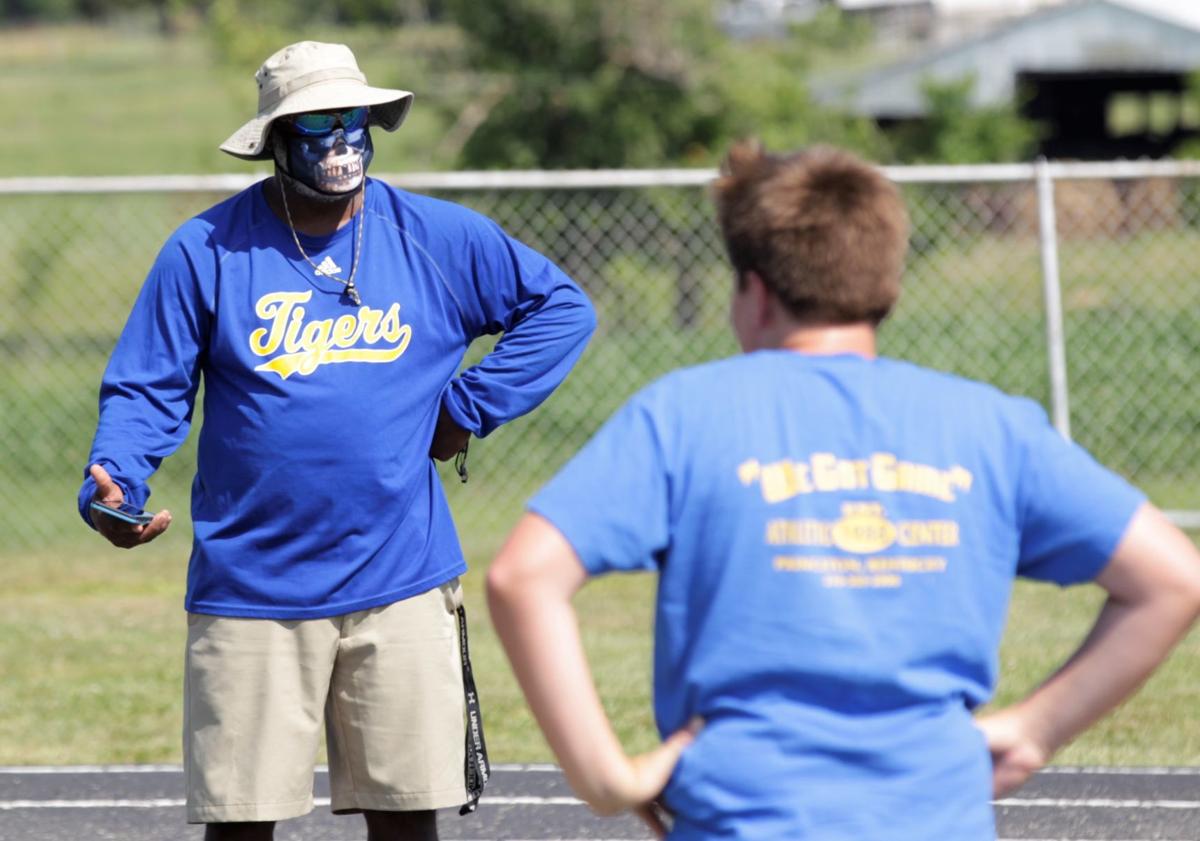 A gift from family, Caldwell County assistant coach Waynee McGowan rocks a skull facemask during a practice last week in Princeton. All coaches are required to wear facegear.

Distance is an absolute must at football practices across Kentucky, and it’s no exception at Caldwell County.

PHOTOS BY EDWARD MARLOWE | The Sun
1 of 2

Prior to football practices at Caldwell County High School, Tigers coach Will Barnes (left) must administer a temperature check to all players and staff before they take the field in small groups. Any temperature registering at or above 100.4 degrees is noted as a potential symptom for sickness.

A gift from family, Caldwell County assistant coach Waynee McGowan rocks a skull facemask during a practice last week in Princeton. All coaches are required to wear facegear.

An opening temperature check from coach Will Barnes. A six-query questionnaire administered before practice. Groups of five or fewer, running different agility and conditioning stations with assistant coaches in Jeff Riley, Aaron McClung and Waynee McGowan.

And not a football in sight.

In any other year, this is an atypical practice for the grid-ironing Caldwell County Tigers, who — like all outdoor sports underneath the KHSAA umbrella — are operating under a slow-and-steady reopening to some sort of normalcy.

But for now, this is the way. And Barnes and his staff are ushering caution in hopes for looser restrictions down the road.

“The way that I look it is that’s what (KHSAA) said we can do, and that’s what we’ve got to do,” Barnes said. “And hopefully the first step to playing football in the fall is this right here. I hope as we progress through the summer, we can start adding and get our whole team together at the same time.

By June 29, barring any significant setbacks within the next week, high-touch sports such as football are set to enter the next phase of reopening, which includes the following parameters on the grid-iron:

Groups of 50 or fewer are permitted in an area, divided into groups with no more than 11 individuals (10 players, one coach; nine players, two coaches; etc.)

Use of tackling dummies/donuts/sleds is still prohibited

No rules-specified protective gear can be assigned

“We’ve operated under the premise that they haven’t done anything in three months,” Barnes added. “Even though I think the majority of them have done something. But we just really wanted to just get out here and see them again. Be around them. The physical aspect and the football aspect of it is secondary right now. We want to get them in a little bit of a routine, and just get to be around them and build some relationships with some of these newer guys.

“And then the football part will come.”

Barnes and the Tigers might not be as behind the curve as other teams, particularly when there are nine returners expected back on both the offensive and defensive side of the ball.

Still, he knows replacing the production of guys like De’Eric Hollowell, Luke Stallins, Devin Kilgore and Ben Holt won’t be an expedient process, and it’ll take even longer than anticipated under the constrictions of the coronavirus.

“We’ve got a good number of guys coming back, so I kind of have an idea in my head of what it’s going to look like,” Barnes said. “It’s just putting the pieces together, and that’ll come together over the next couple months and whenever we can finally get everybody out here where it looks more like a traditional football practice.

“(But) a lot of our core guys that you’ll be reading about and watching on Friday nights, they did a good job taking it upon themselves and finding a way to make it work. A lot of them go to local gyms in town or down in Lyon County, and that wasn’t an option for them. So they had to be creative, a little bit, and do some things on their own, and you can tell that they did that.”