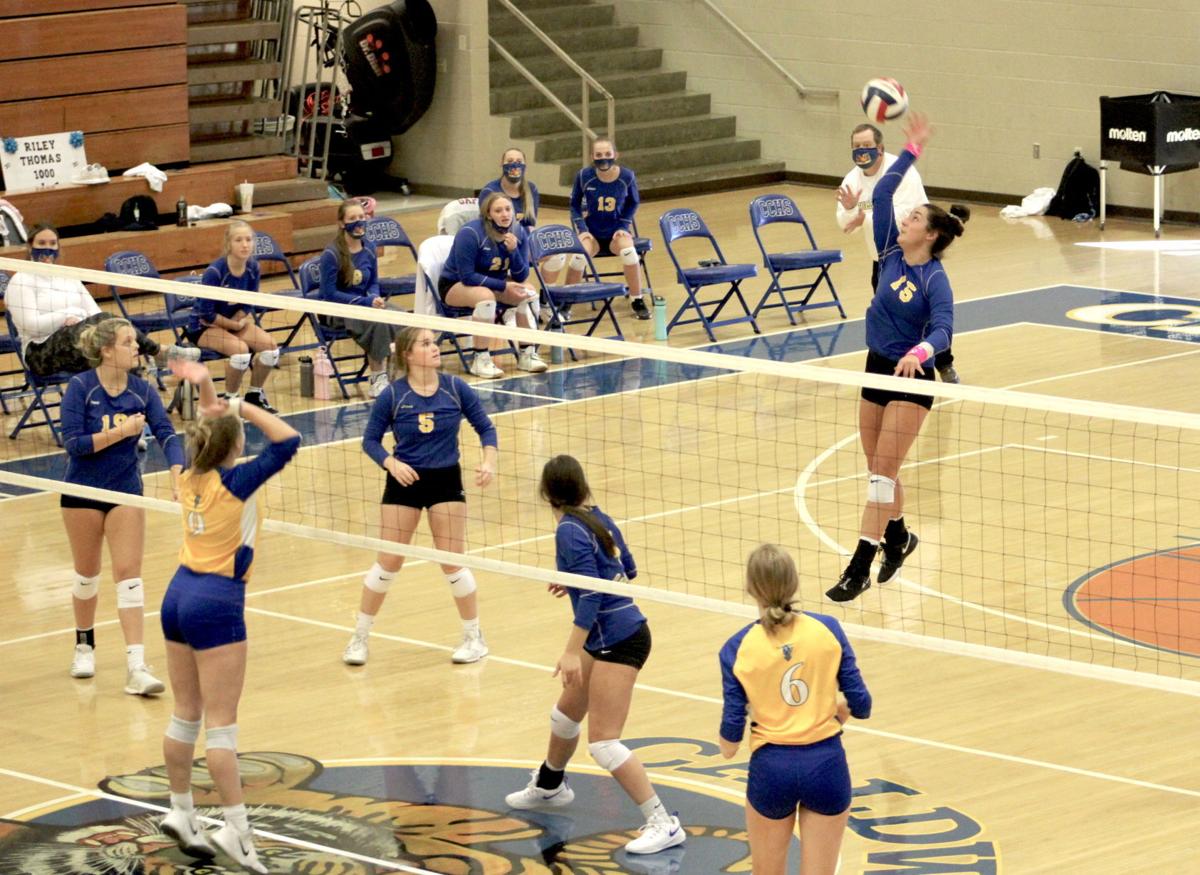 Senior Olivia Mitchell goes up for an attack against Warren East on Oct. 17. Mitchell led the team with 468 kills and racked up 1,000 career kills and 1,000 career digs during her tenure with the Lady Tigers and earned first-team all-state status this year. 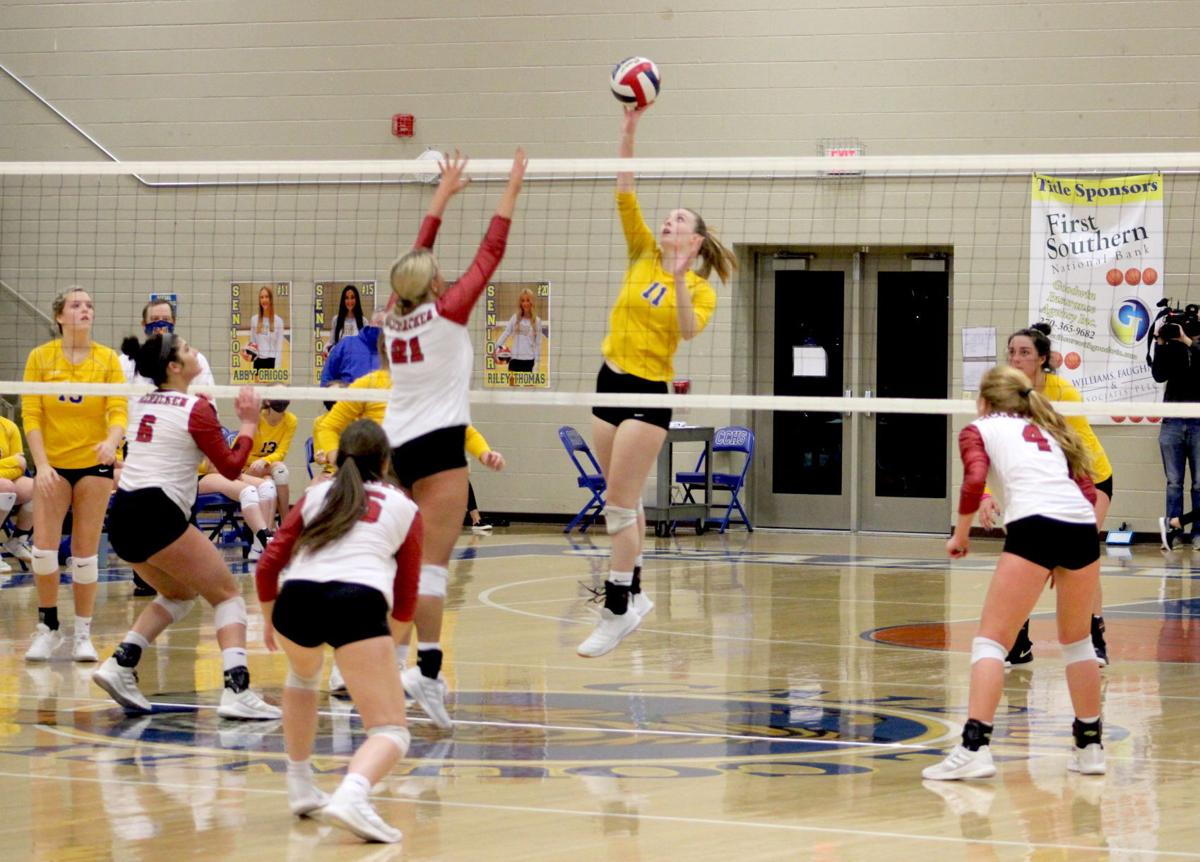 Senior Abby Griggs attacks with a tip at the net against McCracken County in the first round of the state tournament, played at Caldwell County. Griggs earned honorable mention all-state honors and was a strong blocker at the net and a solid server behind the line. 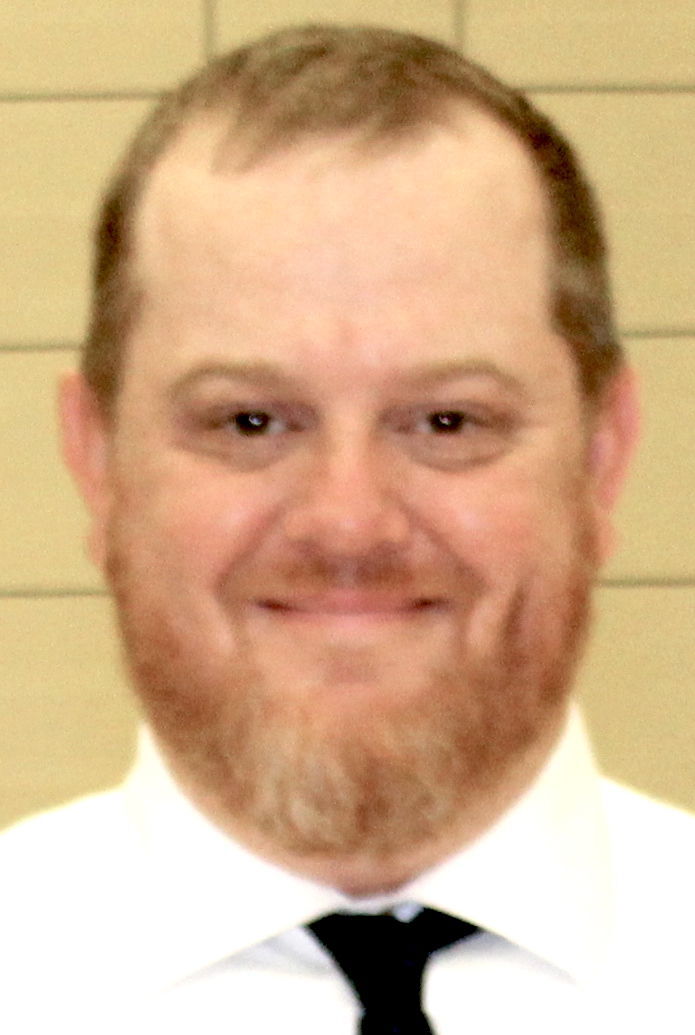 Senior Olivia Mitchell goes up for an attack against Warren East on Oct. 17. Mitchell led the team with 468 kills and racked up 1,000 career kills and 1,000 career digs during her tenure with the Lady Tigers and earned first-team all-state status this year.

Senior Abby Griggs attacks with a tip at the net against McCracken County in the first round of the state tournament, played at Caldwell County. Griggs earned honorable mention all-state honors and was a strong blocker at the net and a solid server behind the line.

The Caldwell County volleyball team finished the season at 19-6 with a perfect 2-0 mark in District 7.

The Lady Tigers won the regular-season district championship, then brought home the hardware for winning the District 7 and Second Region tournaments, earning a berth in the state tournament.

While it was the first season for head coach Daniel Cortner not to record 20 wins (due to the cancellation of matches by COVID-19), it was also his first region championship and first trip to the state tournament.

Cortner closed his sixth season with a career record of 146-65 (.692) and talked about a season that had its twists and turns but led straight to the state tournament.

The team featured the strength of four seniors who have been playing together for at least four years.

Olivia Mitchell was the offensive force of the team, slamming home 468 kills (5.71 per set) while also repelling 237 digs (2.89 per set), notching 1,000 in each category in her high school career. She earned all-district, district all-academic, all-region and first-team all-state honors.

Setter Kendyll Prowell handed out 905 of the team’s 945 assists this season, good for an 11.04 assist-per-set average, and ranked fourth on the team with 113 digs (1.38 per set). Her ability to turn an apparent assist attempt into a quick dump for a kill made her another offensive weapon in the CCHS arsenal. Prowell collected all-district, district all-academic and all-region honors.

At libero, Riley Thomas’ job was to keep opponents’ slams from reaching the floor, something she was able to do a team-high 330 times (4.02 digs per set), thanks to her ability to get where she needed to be in a hurry. She was fourth on the team with 25 aces (0.30 per set) and earned all-district accolades this season.

Cortner has input an attitude of winning on the Caldwell County team. It’s something they expect, and is something that helps the team find a way to achieving its goals.

“Our region has been Henderson’s for the last five years,” Cortner said. “So, to get over that hump in the first round of the region was huge.”

The Lady Tigers put Henderson County out of the Second Region Tournament in straight sets.

“To get into the state tournament with all of the different changes — getting to host the first round — was kind of an icing to that,” he said. “It finished off what was a strange season in a really great way.”

Cortner said that the four seniors were put into leadership roles early in their careers after a group of seniors graduated during their freshman seasons.

“So, they had to jump in and play,” he said. “Every year, they’ve gone deep into a postseason run and had a ton of success individually and as a team: a lot of new milestones and a lot of new records set by these four, due to their longevity.

“They are all phenomenal players — young ladies — and really are leaders all the way around. Those four — as much as anybody — were ‘in-the-moment’ players. When it was a big game, they were ready to step up for us.”

The one-two punch of Mitchell and Griggs at the net added to Caldwell’s offensive advantage. Mitchell’s ability to find an empty spot on the floor for a kill or to muscle the ball through blocks and defenders was bolstered by Griggs’ subtle but successful tips at the net and ability to turn an opponent’s attack into a CCHS point.

“Where we’re going to miss Abby a whole lot is she was kind of that calming force,” Cortner said. “When it was her time on the floor, it was full speed, but when they came off, they really looked to her in that captain role as being the calming force on that sideline to get everybody’s center back, get everybody under control.”

At setter, Prowell was the only setter on the floor for the Lady Tigers for the first year in her career, having been one of two setters in her first three seasons.

Costner said she filled the role admirably, able to find her target with uncanny precision as well as posing a threat when she was near the net.

“When our hitters can come out and set the tone, it really puts their defense back on their heels,” he said. “Then, all of a sudden, you take their breath away when (the setter makes) a dump.

“(Prowell) would pick and choose those moments, and then you sneak that in, it’s a whole other wrinkle for the defense to have to honor.”

Cortner said he would likely look to Sullenger or sophomore Kendra Wynters to fill the setting role next season.

“They don’t have a lot of time to learn,” he said. “Addy will be a senior and Kyndra will be a junior. They’ve got to go at it pretty quick, and we don’t know what spring season and summer workouts we’ll be able to have. They’ve got some shoes to fill.”

Cortner said the harder shoes to fill will be in the libero position, where Thomas led the defense and crossed the 1,000-dig barrier this season.

“We almost think that whichever one is not the setter will be top in line for the libero,” he said. “Riley was a godsend. … What I love is watching film from the back line, from the end line. She’s in the right spot. You see those liberos who make diving plays and fancy plays and they wow you with how much floor they look like they cover. Riley’s already there.”

Cortner said some ideas for next year’s squad would be to move junior Savannah Scott to middle blocker, where she played last year, and to have the team more geared for defense.

“I expect to have longer rallies,” he said. “Mary Tays will be back, probably playing outside and playing back row. Like I said, Sullenger and Wynter will be back. Maggie Griggs will be a senior playing defense. Kynady Thomas will be a senior. She played middle for us this year very well.

“Then, you’re looking at role players across the front that can pretty well hit anywhere in Katie Menser and Lilly Hoard — some pretty good athletic girls.”

Cortner said a lot of the younger team members will get a chance to play. After all, he said, they’ve been practicing against one of the best teams in the region all year long.

Lady Tiger volleyball took the on-again, off-again schedule affected by COVID-19 and played what was given them, not letting potential frustration keep them from their goal. The 2020 team will be one for the record books.