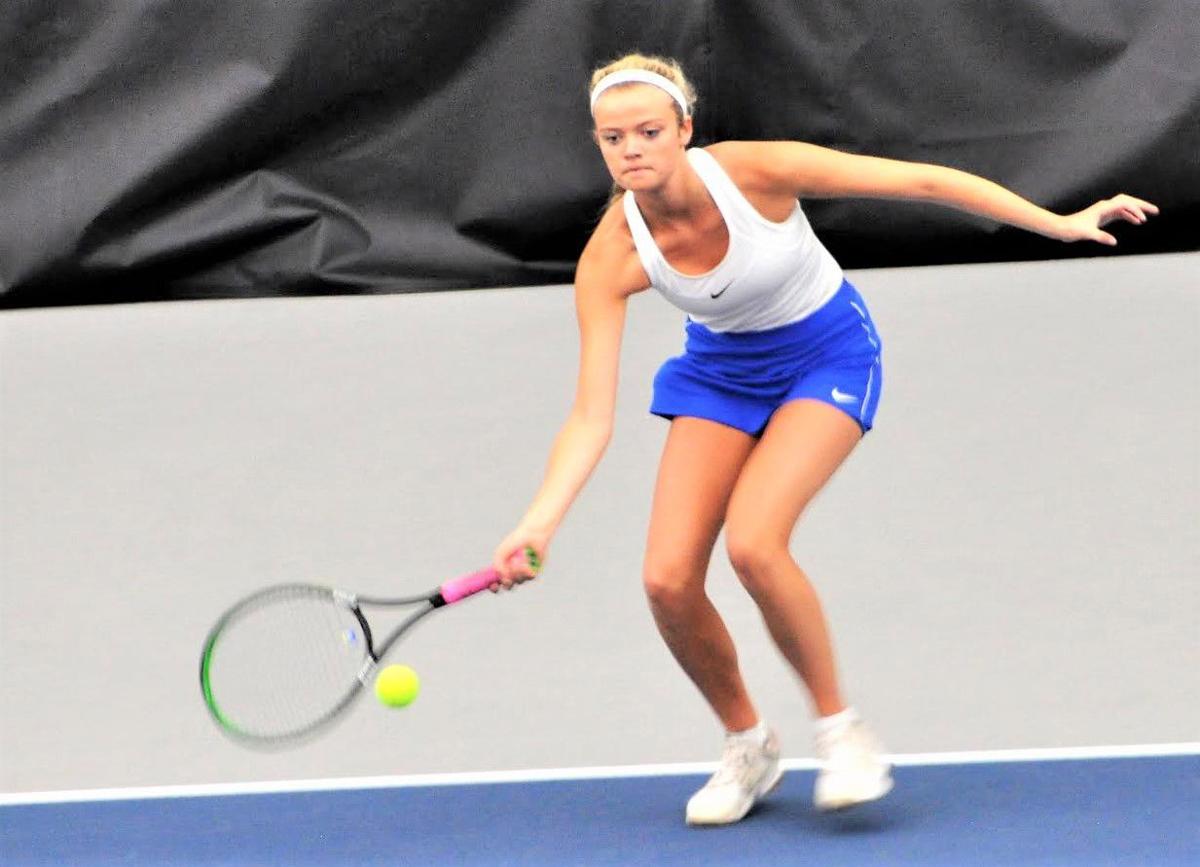 After nine years with Caldwell County tennis, Lady Tigers star Belle Englebright can clearly say it’s been a good career. But like so many across the state of Kentucky, she’d like things to end on her own terms. 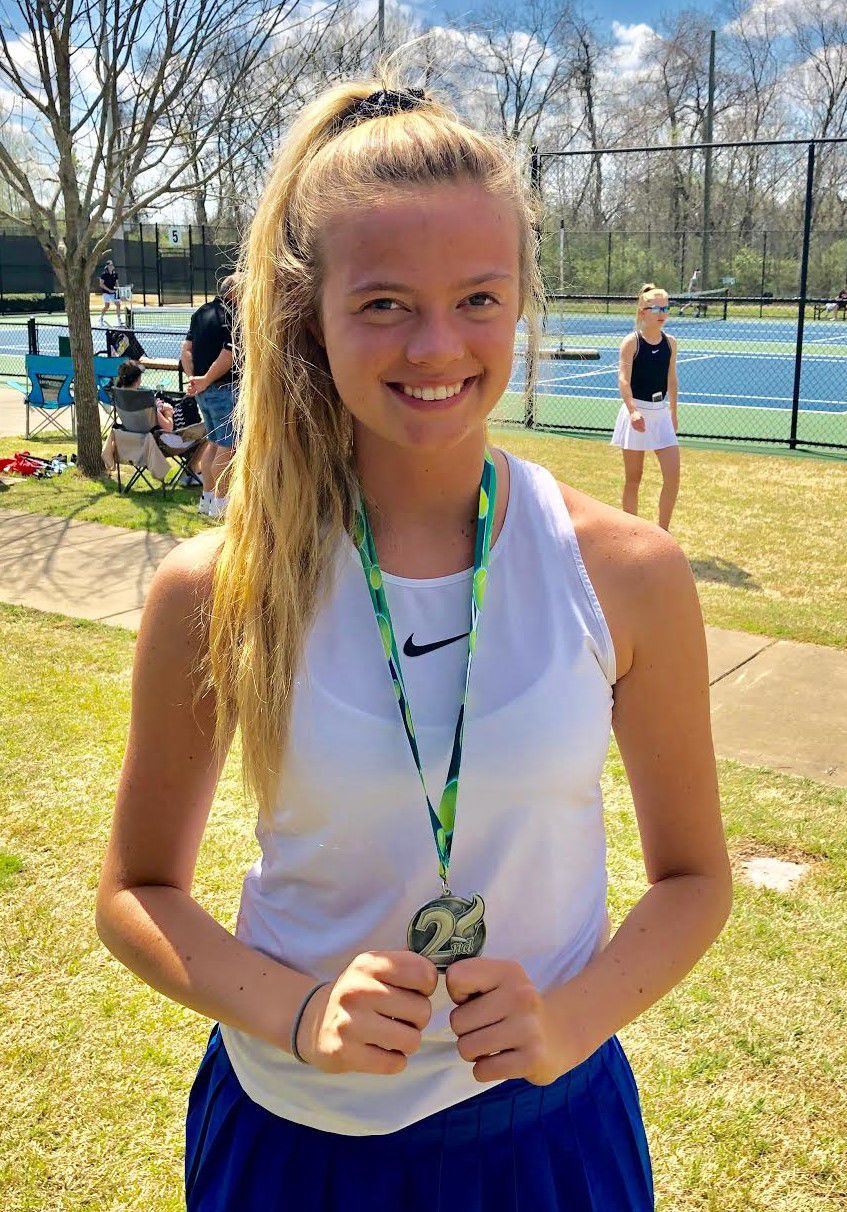 After nine years with Caldwell County tennis, Lady Tigers star Belle Englebright can clearly say it’s been a good career. But like so many across the state of Kentucky, she’d like things to end on her own terms.

After nine consecutive seasons, Caldwell County’s Belle Englebright has suited up for varsity tennis with the Lady Tigers more years than she hasn’t.

So, this hiatus...this pause in high school sports as the battle against the coronavirus continues...it’s strange and painful.

She should be pushing along the singles circuit with senior sister Maddie Morgan, in what likely would’ve been a Caldwell-Caldwell finale at the 2020 Second Region championships. She should be watching the growth of Josie Shaffer, Emma Peek and Rachel McClung, as the future develops into the present. She should be enjoying this final season with her father, Jae, and a new head coach in Steve Kukahiko, following the retirement of longtime aces Kim Farmer and Raymond Giannini.

And she should be working through another undefeated regular season, much like the one she built in 2019 on her way to a school-first seed (9) in the KHSAA State Tournament.

Instead, she’s cooped at home, left only to prepare for her next chapter at the University of Kentucky this fall.

“I still have dual-credit online classes going on, so I am working on those at the moment,” Englebright said. “I was invited to go to Merit Weekend at UK, but it was cancelled. I have been on several Zoom calls to schedule my classes for UK next year. That has really given me something to look forward to. Although, in my free time, I have been painting and drawing. The break has really allowed me some extra time for things I normally wouldn’t have time for.”

Englebright had...and probably still has...the opportunity to play competitive collegiate tennis on scholarship, if she wanted. In the past two seasons alone, she’s been contacted by numerous Division II and Division III programs through email, direct message and phone call — all interested in her skillset, both academic and athletic.

And Englebright admits the allure is there.

But the bright lights and big city have a bigger draw on her heart. And after a 2019 summer in the Governor’s Scholar Program studying architecture at Centre University, she knew it was time to make books No. 1, and a tennis ball No. 2.

“I thought about...seriously...really long and hard...about playing tennis in college,” she paused. “I always knew that was an option for me. But getting into GSP was definitely such a big sign for me. Because I knew that if I hadn’t gotten it, I would’ve spent my entire summer playing tennis.

“And this was a big deciding factor for me: Division I was out of the question. I knew that probably wasn’t going to happen. And one thing that I knew I wanted to do for college was go to a big city. Be at a big school.

“Caldwell is so small. It’s a great community. And I love it. But I know there’s bigger and better things out there. And I really wanted out of that ‘small community.’ I needed somewhere big. I knew, probably that if I was going to play tennis, I was going to have to play somewhere smaller.”

Never fear, though: intramural tennis in Lexington is still on her list.

“I don’t want to give it up altogether completely,” she added. “That would be like losing such a big piece of myself.”

Englebright and the Lady Tigers had actually already opened the 2020 season with a tight 4-3 win over the St. Mary Lady Vikings (Tuesday, March 10) when news from the KHSAA stopped all play across the state.

So while a 6-0, 6-1 win against Megan Lorch could possibly be the final singles match of her storied high school career, it isn’t her favorite.

No, that honor belongs to her 2019 Sweet 16 appearance with Sacred Heart’s Carrie Beckman.

Beckman, then a sophomore already betrothed to play tennis at Notre Dame, was...and still is...considered the No. 1 girls singles player in Kentucky, the No. 10 player in the Southeast Region of the US, and No. 50 nationally.

It’s the kind of matchup any athlete sweats in the off-season for, because to be the best, one must play the best.

“In my entire high school career, that was probably the best tennis I’ve ever played,” she remembered. “And I say that with 100% belief. I definitely rose to the occasion. Region 2, sometimes it’s kind of a transition going from region to state. At state, it’s a different atmosphere. They hit harder. It’s faster. It’s different. It’s like off-season play.

“Playing Carrie is probably the best high school match I’ve ever played. I usually don’t play people like that. No offense to anyone in the Second Region, but (Carrie’s) skillset is amazing. The pace. Just everything about that match. I had to rise to the occasion, and that’s what I did. It was like I was a different player out there.”

It was also the kind of match that propelled Englebright into 2020. After holding her seed line in Lexington a year ago, she was preparing to see if she could take it a step further. Would a strong regular season push her to the 5-seed? Was the Elite Eight a possibility? Could she make it past Day 2?

Questions that may forever go unanswered.

“I was really excited for this season, obviously, because it was my senior year,” Englebright admitted. “But I really wanted to keep that momentum, because when you get to the Sweet 16 round, you know you’re going to hit a seeded player. And regardless of who that player was, I wanted to do better than I did last year. Have that grit to keep going. To stay in that top-16 spot. I worked hard for it. It didn’t necessarily come easy. I’d had bad draws at state. My goal was to be seeded, make it to the Sweet 16 and play my game. You never know what’s going to happen. And being in those top 16 spots is an accomplishment for me.”

An off-season filled with practice, tournaments — and even a few sessions with former Murray State women’s tennis coaches in Mel Purcell and Raymond Sims — seems so distant now for the Lady Tigers.

Hope remains, however, for some type of season, though workouts are becoming more difficult.

And with all play suspended to no earlier than May 1, time is slipping.

“Most indoor facilities have shut down, and the weather is not reliable,” Englebright said. “I am excited for the season because it holds so much possibility. And I plan on trying for my fifth regional title and making it to state.

“Although, if our season does not happen, I am very satisfied with my high school tennis career. It’s important to not think about what might have been, but what all I have accomplished. Last year, my goal was to be a seeded player at state and make it to the second day. I accomplished my goals, and there is no way last season could have gone better.

“I hope to do the same this year, and even if this is goodbye to high school tennis, I know I accomplished all that I could in my nine years of varsity tennis.”