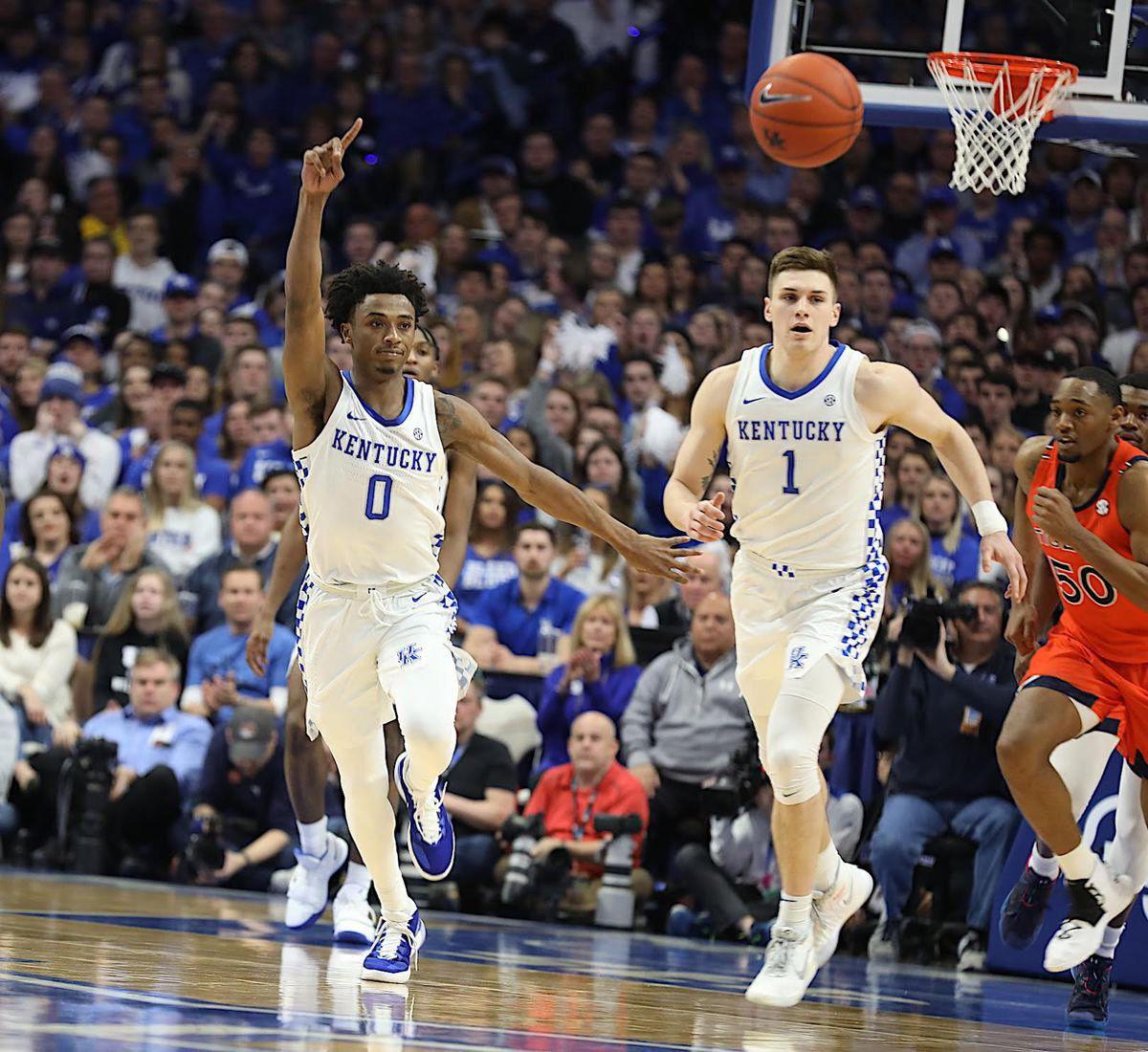 John Calipari insists there is "no better defender" than Ashton Hagans -- who knew UK was No. 1 in the SEC when it beat Auburn -- but the UK coach does worry his sophomore point guard might need a rest before postseason play. 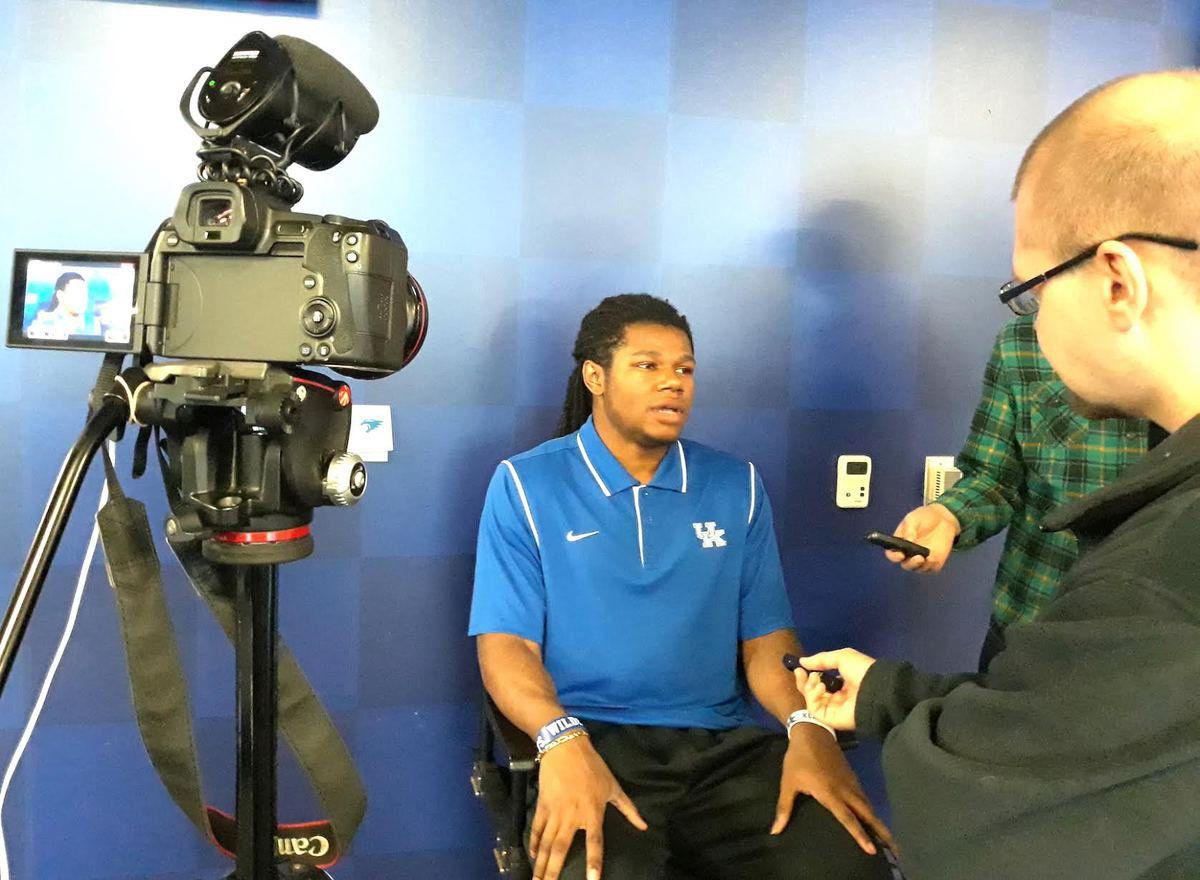 Kalil Branham played four sports in high school, taught himself to play the piano four years ago and loves to bake. He was also a top 500 player in the 2020 recruiting rankings. 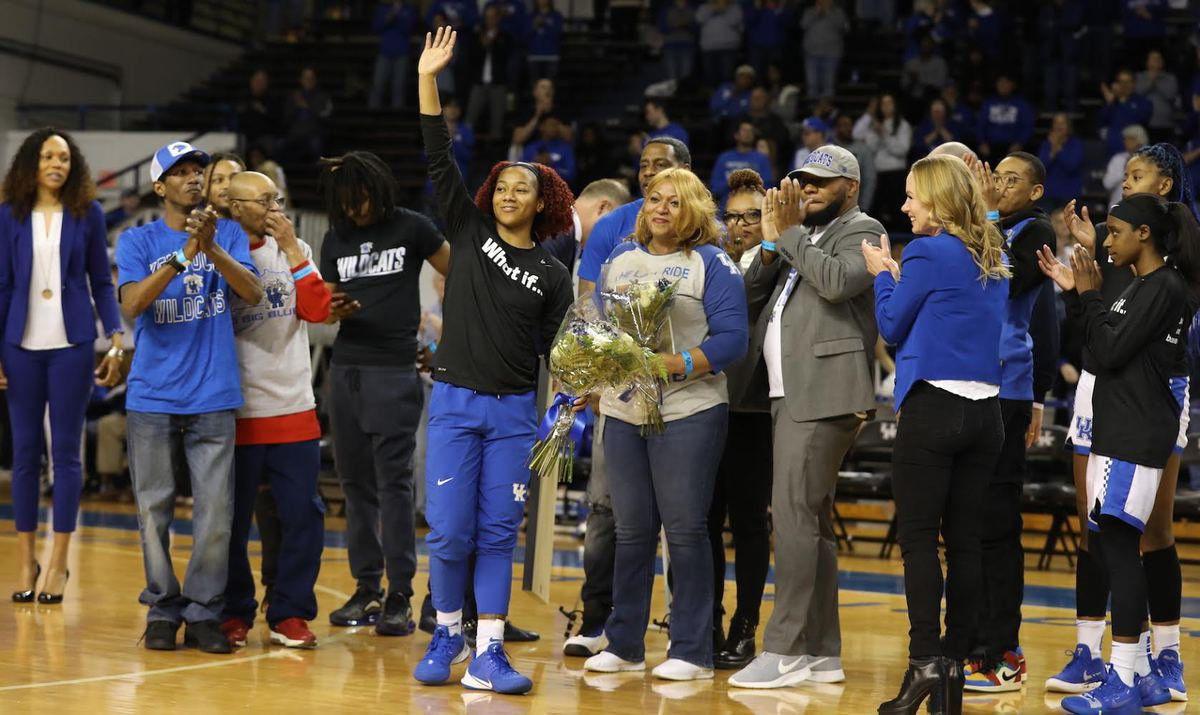 Jaida Roper waved to fans at Memorial Coliseum on Senior Nigh and says she'll miss “clowning around” with teammates more than anything after her UK career ends. (Vicky Graff Photo)

John Calipari insists there is "no better defender" than Ashton Hagans -- who knew UK was No. 1 in the SEC when it beat Auburn -- but the UK coach does worry his sophomore point guard might need a rest before postseason play.

Kalil Branham played four sports in high school, taught himself to play the piano four years ago and loves to bake. He was also a top 500 player in the 2020 recruiting rankings.

Jaida Roper waved to fans at Memorial Coliseum on Senior Nigh and says she'll miss “clowning around” with teammates more than anything after her UK career ends. (Vicky Graff Photo)

Since he grew up up in Columbus, Ohio, Kalil Branham's dream was to play football in the Big Ten and he originally committed to Michigan. However, he later had a change of heart and the talented receiver signed with Kentucky.

"I felt like I could play really anywhere (in the country) and I felt like this was the place I needed to be," Branham, who enrolled at UK in January, said. "I had heard about UK from other guys they were recruiting in Ohio but I was just kind of focused on what I needed to better myself to get to where I should be.

"Once I decided it was not Michigan, the UK coaches started talking to me and I could tell they really cared about me and wanted the best out of me. As soon as I stepped on campus, it felt like home. It just felt like family with all the love and some place that I had to be."

He was rated a top 500 national recruit by 247Sports and as the 10th best player in Ohio -- and he even played quarterback as a junior out of necessity when injuries hit. That's the same scenario that shifted Lynn Bowden from receiver to quarterback for UK last year when the Cats turned exclusively into a running team.

"They did have a great quarterback (Terry Wilson) who did go down and knowing he would hopefully be playing the next year made me not worry about the offense and this is a place where I could show what I have got skill-wise," Branham said. "I know they have great quarterbacks here and they ran the offense they did last year because that's what it took to win.

"But since I played quarterback in high school as well, I felt if that happened again (with injuries) I could be in the place Lynn was in and try to do what he did. I have been out with quarterbacks here. We go out every Saturday and throw. Everybody is looking real good right now. I am not worried about us being able to throw the ball a lot next season."

Branham is an exceptional athlete who lettered in four sports -- football, basketball, baseball and track --at Northland High School in Columbus. He was a state champion in the 200-meter dash

"I would say my two favorite sports would be baseball and football. I was a center fielder, pitcher and shortstop in baseball. I had a .457 batting average and considered myself a good hitter," he said.

He says skills from all those sports help make him a good receiver.

"My physicalness, my speed, all of that makes me a great all-around receiver," he said.

His first love actually was lacrosse, or maybe boxing. He played lacrosse before football and then did both from fourth grade through seventh grade.

"Lacrosse is just like football. I loved the contact," he said. "Somebody is coming down with the stick and you could just hit 'em. That's what I enjoyed."

"I did box for the same reason. We have a heavy bag in the student center (at UK) that I will go to probably once a week just to stay sharp," he said.

There is a softer side to Branham, though. He loves to bake, something he started doing with his mom when he was about 3 years old.

"Then I just took it on by myself. It's just something I always enjoyed," Branham said while noting that brownies are his speciality.

He's also incredibly smart. He taught himself to play the piano, something very few people could ever do, about four years ago.

"Playing by ear takes a lot of repetition. Hearing the song and playing and hearing and playing. It does take a while to learn and teach yourself. It's a talent. I don't know if everybody has it or not," he said.

"My mom was in the (church) choir when she was younger and she sings. She played in the marching band when she was in high school. She played the flute, so music is kind of in our family," Branham said.

But so is football. His brother, John, is a running back at Eastern Michigan -- the team Kentucky opens the season against Sept. 5 at Kroger Field. The UK freshman said going against his brother, who is two years old, always pushed him to improve.

"There is no better defender that I know of," Kentucky coach John Calipari said. "There is nobody that will come up with a rebound to win a game like him."

Calipari didn't stop there, though, as he switched over to Hagans' offensive worth.

Calipari wants Hagans to stay aggressive but do so a bit more wisely than he has at times during the last 10 games.

"How do we do it? Is it step you off the court for a game and let you have a couple days of practice off and a game off and then come back fresh? I don't know. That's an option, which I've talked to him about."

Hagans said he would sit out if asked and admitted he has had thigh, shoulder, back and ankle injuries this season. But he doesn't want to miss any games.

"I would always want to be out there on the court to try to keep winning, try to keep doing something good, try to keep this thing on a roll," Hagans said.

The sophomore had just one turnover in 34 minutes in the win over Auburn Saturday that clinched the SEC title. He also had five assists, three steals and three rebounds. But he was 2-for-13 from the field and 0-for-3 from 3-point range.

However, the shooting didn't upset Calipari who said UK could win even if he did that provided his other stats and defense were as good as they were against Auburn.

"The only person it bothers? Him. His head goes down and 'I can't believe, I missed this dunk. Forget it.' For our team, it really doesn't matter," Calipari said. "If you defense, you get five, six, seven assists and one turnover and you do the rebounding and all the other stuff, we're going to win. But it's hard for these kids. The are not robots, not machines."

Kentucky's five senior basketball players beat Georgia 88-77 in their final regular-season home game last week have despite losing at Vanderbilt Sunday went into this week's SEC Tournament with a double-bye after finishing in a four-way tie for third place.

"All wins this time of year are outstanding and are great," UK coach Matthew Mitchell said after the senior game win. "This one's a little extra special, just with it being senior night and wow, did the seniors step up in a major, major way."

Before the final home game, all five shared their favorite college basketball memory.

Ogechi Anyagaligbo: "A great memory for me will be my first year here, running back from having a common-hour chemistry exam to see Evelyn Akhator tip out the rebound and get the pull-up layup so that we could beat Mississippi State. Another one for me will be that senior night. I had just met Evelyn that year and I was balling like I've known her my entire life. It was awesome."

Sabrina Haines: "I have a lot of memories, of course from both ASU (Arizona State) and here, but I think the top one is when we would have team game nights. It was always fun. Honestly, my roommates, too. I live with Amanda (Paschal), Nae Nae (Cole) and Kameron (Roach). Sometimes, we just clown for no reason, like we would be talking about the dumbest stuff, but it's so funny."

Nae Nae Cole: "My favorite memory would have to be going to Italy (for a summer exhibition trip). Their ice cream, gelato, I've never eaten so much gelato before in my life, but I will go back and eat just as much. That was definitely my favorite memory because I don't know if I will ever be able to travel like that again, so that is something that I am very appreciative for."

"They love him," Marrow said. "I don't think he will last past the third round (of the draft in April). I talk to a lot of NFL guys. There are a lot who love him and some that don't like the penalties (Stenberg had at UK). But I told them you've got to have a grown man in the offensive line. If your line is tough, he will make it tougher. If it is not tough, he will make it tough.

"He's a gentleman off the field but on the field he is nasty. At the Senior Bowl, he made a lot of money for himself with how he played."

Marrow has explained to NFL scouts that Stenberg, an Alabama native, was part of a culture change at UK.

"I told them we had Benny Snell, Josh Allen and Lynn Bowden but I truly believe the culture changed here when we got some big, tough linemen," Marrow said. "Logan is the type dude when you get off the bus that people know he's a tough dude.

"Our line started getting respect and Logan helped change that culture for us in this league. He'll help some team in the NFL do the same."

It didn't get a lot of attention when Kentucky senior swimmer Sarah Loheide of Louisville was named to the Southeastern Conference Community Service Team.

Loheide has 239 hours of community service and still has a perfect 4.0 cumulative grade-point average in human nutrition. She's been involved with the International Book Project (25), The Hope Center of Lexington (110 hours), mission trip to Ethiopia (70 hours), CATS in the Community (34) and more.

She is a freestyle specialist -- her mother swam at the University of Louisville -- and one of many collegiate athletes who not only succeed in their sport but also do a lot to help the community while in school.

Quote of the Week: "They are right there with the most active teams defensively in the nation. Baylor is very active. San Diego State has a grown man's defense. Duke can be really active. Seton Hall, those guys get after you. But none are better than them in that area," ESPN analyst Jimmy Dyke on UK's active defense.