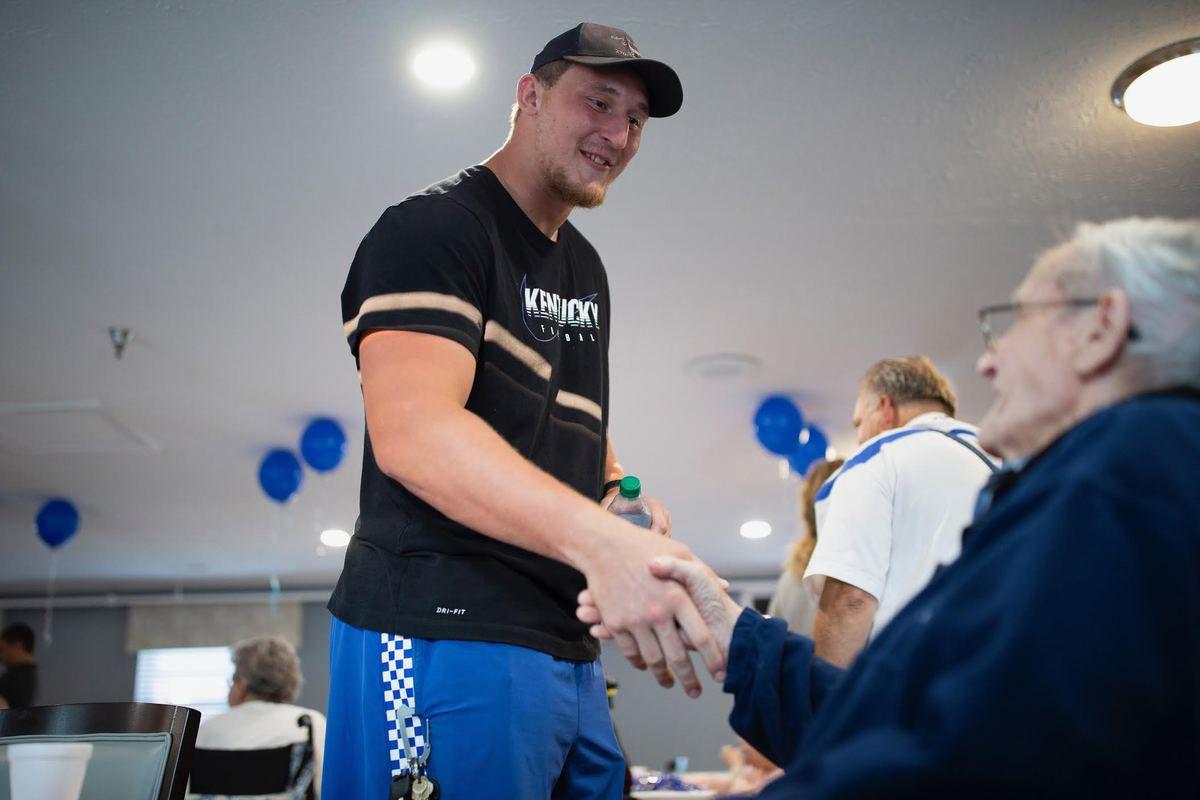 Junior offensive lineman Landon Young (at right) says he learned the value of character at an early age from his father. 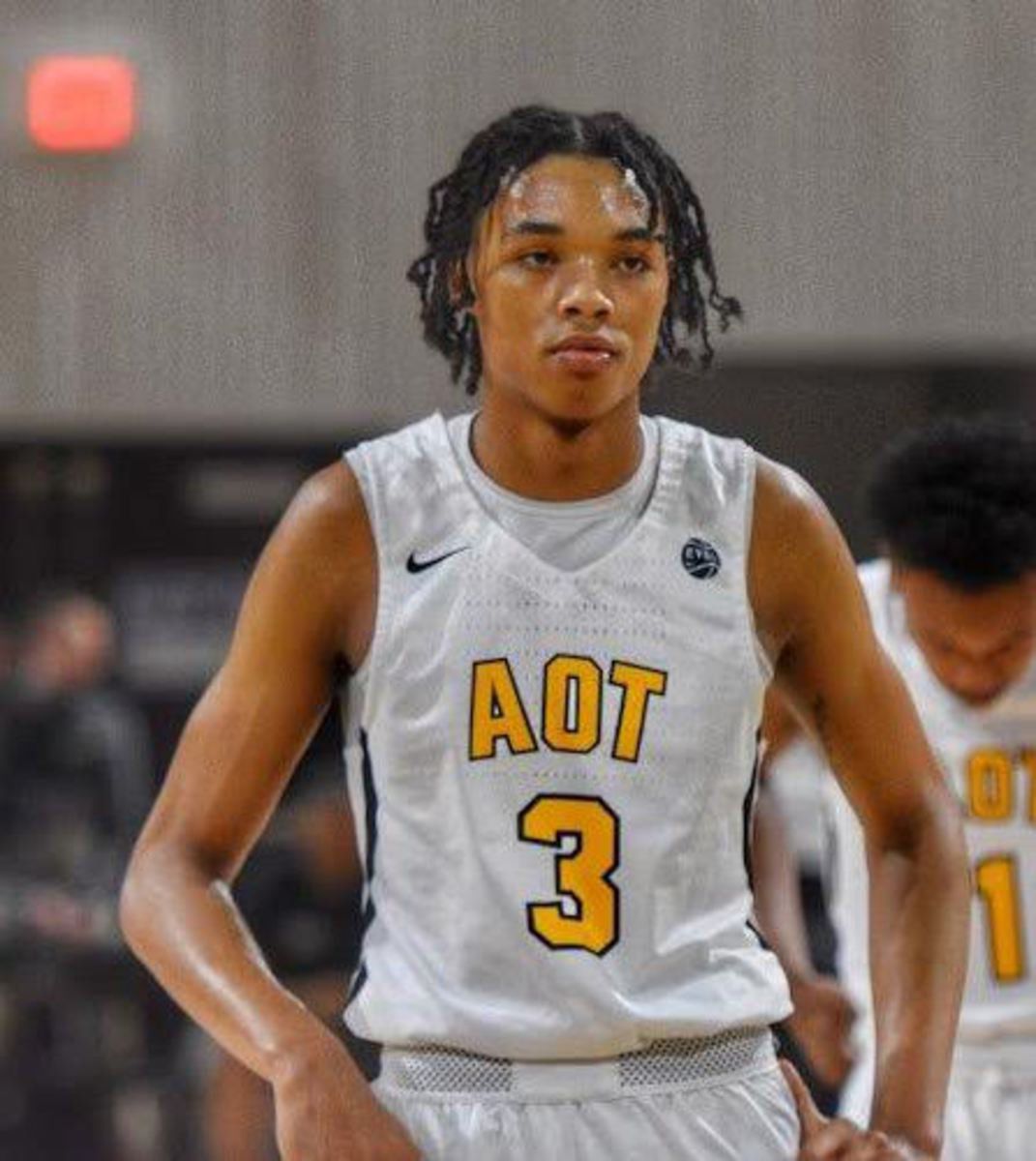 Kentucky commit Brandon "BJ" Boston's versatility will make him a good fit with Terrence Clarke or just about any other player in recruiting writer David Sisk's opinion. 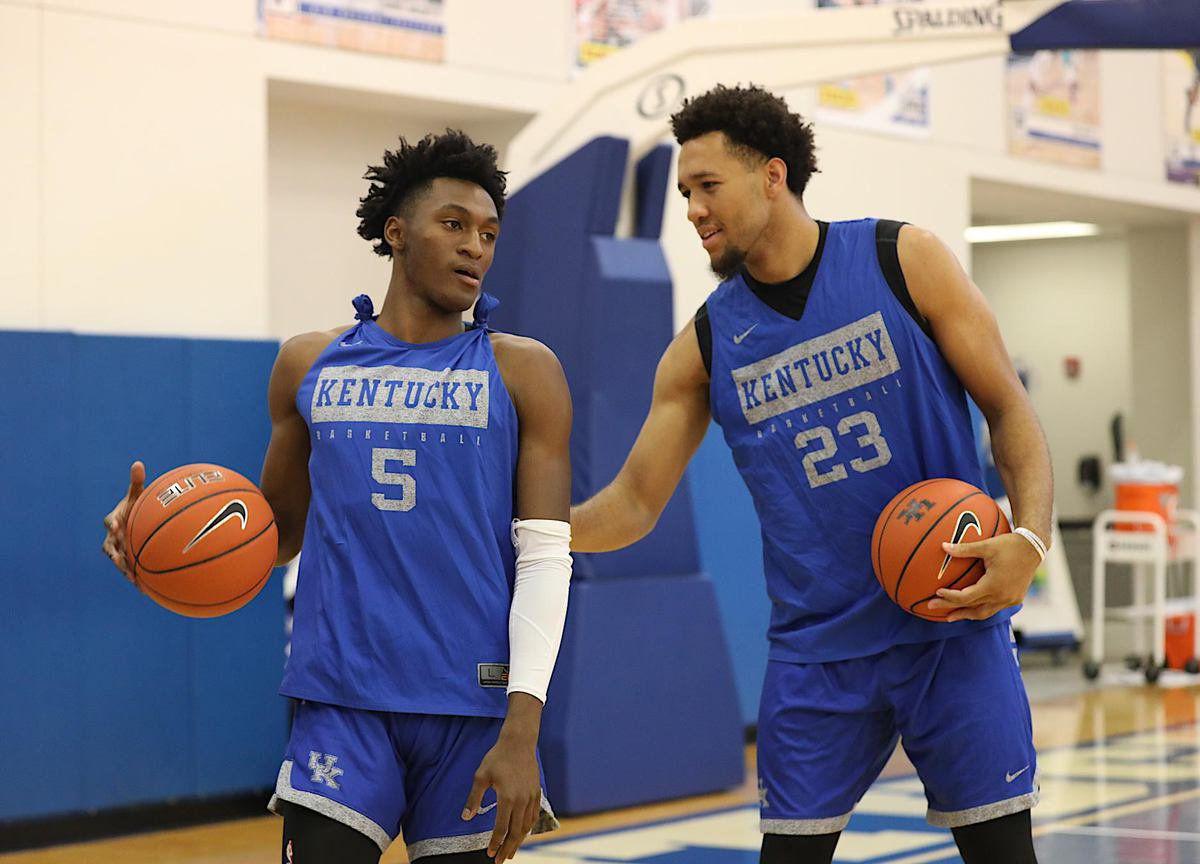 Sophomore guard Immanuel Quickley (left) says experience he got last year will make him a much better player this season.

Junior offensive lineman Landon Young (at right) says he learned the value of character at an early age from his father.

Kentucky commit Brandon "BJ" Boston's versatility will make him a good fit with Terrence Clarke or just about any other player in recruiting writer David Sisk's opinion.

Sophomore guard Immanuel Quickley (left) says experience he got last year will make him a much better player this season.

Kentucky's backcourt is getting a lot of national attention with the return of Ashton Hagans, last year's SEC Defensive Player of the Year, and arrival of freshman Tyrese Maxey, who is already being projected as a 2021 NBA lottery pick.

The UK coach compares it to the transformation P.J. Washington made last year when he came back for a sophomore season and became a NBA lottery pick. Calipari says Quickley has a "different frame of mind" just like Washington did and has responded and seen things differently.

"Just being around for a year and knowing what everyone expects … coaches, players, even what I expect of myself … has really helped," Quickley said. "I took this offseason to get better on every aspect of my basketball play.

"I know what games are like … home games, away games, TV games, neutral site, SEC games. Just knowing what to expect each and every game is a huge help. Practices, I know what the coaches expect. Everything is just familiar now."

Quickley wasn't even surprised when he found out Calipari praised him so much.

"That is not something that surprises me at all because I put a lot of work in during the offseason training and stuff. Working on the mental aspect of my game as well as physical aspects," Quickley said. "Nothing has really changed that much except for my mentality. If I miss a shot, I will shoot it again. If I miss that, I will shoot it. I didn't feel that way last year. The staff has just pushed me to be confident and I put a lot of work in to do that."

Quickley played in 37 games last year and averaged 5.2 points, 1.8 rebounds and 1.2 steals per game while shooting 34.5 percent from 3-point range and 82.8 percent at the foul line.

Calipari likes what he's seen from a more confident Quickley -- "he seems to be that guy right now." However, he knows no one can give the sophomore confidence until he shows what he can do in games.

"I can help him gain confidence, he's got to build it himself. Then you got to get into games and you got to have demonstrated performance," Calipari said. "You got to do something in the games that convinces you, not me, that I got this."

Now when it comes to UNO, a card game, Quickley has plenty of confidence. Recently his mother, Nitrease Quickley, and aunt, Demetria Caldwell, were in Lexington for a visit and like they often do, they all played UNO.

"I beat them a lot. My mom actually quit playing. She was tired of losing, so she just quit," Quickley laughed and said.

Quickley didn't quit last year when he practiced against Hagans, Keldon Johnson, Tyler Herro and others. That helped him gain confidence as he found he could play with them and now he goes into this year expecting to do even more.

"You can always do better, but I had a pretty good first year. Now people are going to see more and different things from me this season. I've become a more aggressive player, more consistent player," Quickley said.

"That's not pressure, not at all. I am looking forward to the season and bringing more leadership definitely," Quickley said.

Last year's team just missed a trip to the Final Four. Despite losing three NBA picks along with Reid Travis, Quickley is convinced this season can be special.

"I think we will be a really good defensive team, especially with Nick (Richards) in the middle blocking shots like he can. I think with our size and athleticism we will be able to hold a lot of offenses in check," Quickley said. "Offensively, I would hope we are better because that is the goal to get better each and every season. We lost a lot but I think we can make up for it."

"He's a thinner guy. He is about 6-7 but he has to put on some weight," Sisk said. "He can score. No doubt about that. Him and Clark can play well together. They can be interchangeable at the 2 and 3, especially if Calipari goes small and opens lanes for them both to drive.

"Boston is really versatile and could play anywhere from the 1 to the 3 offensively I think. Defensively, can guard the 1-3 and maybe even the 4. So he gives you versatility, length and a lot of scoring punch."

Sisk knows UK fans are worried about not having a true point guard in the 2020 class yet.

However, Sisk says if a player like Immanuel Quickley doesn't return for his junior year and if UK does not sign a point guard, Boston might be even more valuable.

"Boston might not be a true point guard but he can handle and spell time there or maybe even play there a lot of that's what the team needs. He's that good," Sisk said.

"He is a shooting guard who can do a lot of things really well," Sisk said. "He's just effortless because he is such a natural player. He can score, handle the ball, pass, play defense.

"From what I hear he is already seen as a Kentucky lean. He is not going to reclassify (to the 2020 recruiting class like Clarke did) but it is never too early to look ahead and he is one for Kentucky fans to watch.

"There have been some players in the past many wondered why Kentucky got in late and would lose out. The Kentucky brand speaks for itself and Kentucky can have the option to come in late and still get a player, something a lot of other schools can't do. But Calipari really seems into Jaden Hardy."

Michigan State has the nation's best team going into the season in most preseason basketball polls and will open the season Nov. 5th playing Kentucky at Madison Square Garden in New York.

"The hard thing about playing them is this year they actually got a couple of sophomores so you're gonna know something about their guys," Izzo said. "Otherwise, you've got to go back to high school film.

"But when you open with them, you've got Duke two games later, you've got potentially Virginia Tech and then either Georgia or Dayton if you win and then maybe Kansas in Maui. And then we come back and we play Seton Hall on the road and right now, as I looked at them a little bit, they're really good.

Kentucky coach Mark Stoops says he considered playing true freshman linebacker Jared Casey in UK's loss at South Carolina but felt it would be better to wait until after the bye week to have more time to get him ready.

"We want to get him in but also save a redshirt year," Stoops said.

It's basically the same with JJ Weaver, another former Louisville high school start.

"You never know what can happen with injuries. Having somebody out for two or three games (with an injury), then we can plug these guys in. They will definitely be in there and get some playing time."

Transfer linebacker Xavier Peters did get in for the final series at South Carolina, his first action at UK since arriving from Florida State.

"We have got to look at all options," Stoops said. "Inexperience is a problem for us. On defense we have a lot of young players who are getting better. The future is really bright."

If proposed legislation leads to the NCAA allowing college athletes to make money off their likeness, it could produce significant revenue for some high profile athletes.

At Kentucky's Media Day, coach John Calipari was asked who he thought might have been the most marketable player he would have had at UK was.

"I don't know. I mean, shoot, we have had so many … you think about it, we got … there's been 22 max contracts in the NBA the last 10 years. Twenty-two. Our guys have had seven of them," Calipari said. "And that's before some of the guys coming up with the De'Aaron Fox and, like what are you talking about?

"Please just understand, this is like fantasy land, this stuff that's happening right now. And that's -- but again, until it all comes out, hey, and you people that know me know, I will have an opinion, but I make it where it's educated first, that I know what I'm talking about."

The coach was talking about the proposed legislation in some states to let NCAA athletes make money. However, he never answered the question about this most marketable athlete -- a Calipari speciality.

One would think it might be Anthony Davis, UK's star on the 2012 national championship team. But what about Karl Anthony-Towns on the 38-1 2015 team? Or maybe John Wall? And Tyler Herro could have been a marketer's dream.

It's probably at least three years before athletes could have this option, but it is something they think about.

"I really don't know enough about that to comment," Kentucky sophomore guard Immanuel Quickley said. "I will be gone (from college) before it happens but I imagine a lot of guys would be fine making money while they were playing if that does happen."

Kentucky junior offensive tackle Landon Young was named to the Allstate AFCA Good Works Team® for his dedication to giving back and leadership on and off the football field. He is also one of 91 nominees for Wuerffel Trophy given to the FBS player that best combines exemplary community service with athletic and academic achievement.

"My father always taught me growing up that character is the most important thing in life above anything else you might accomplish in sports or anything else," said Young. "To be recognized for something in my sport that is about more than just my sport does reflect more on what I am to other people and how I treat others rather than just what I do on the football field.

"Instead of just being a guy who blocks on the football field, I have hobbies and things I like to do. I want to give back all I can because so many people have done things for me. If I get a chance to do something for someone, I like to do it."

Quote of the Week

"He is incredible. He is such a weapon. What impresses me is that he can do so many different things punting the ball. He can run left and kick back to the right away from a return guy and that is so hard to do," former UK all-SEC punter Andy Smith on Kentucky junior punter Max Duffy.