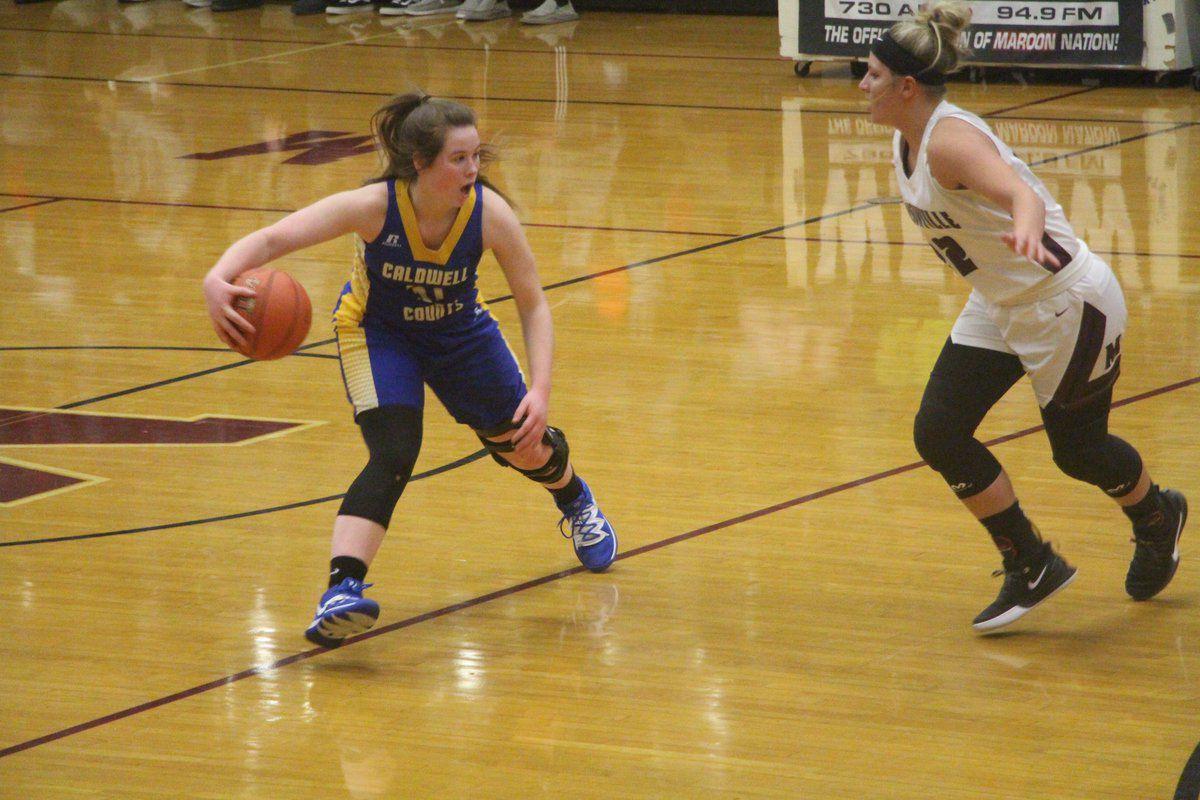 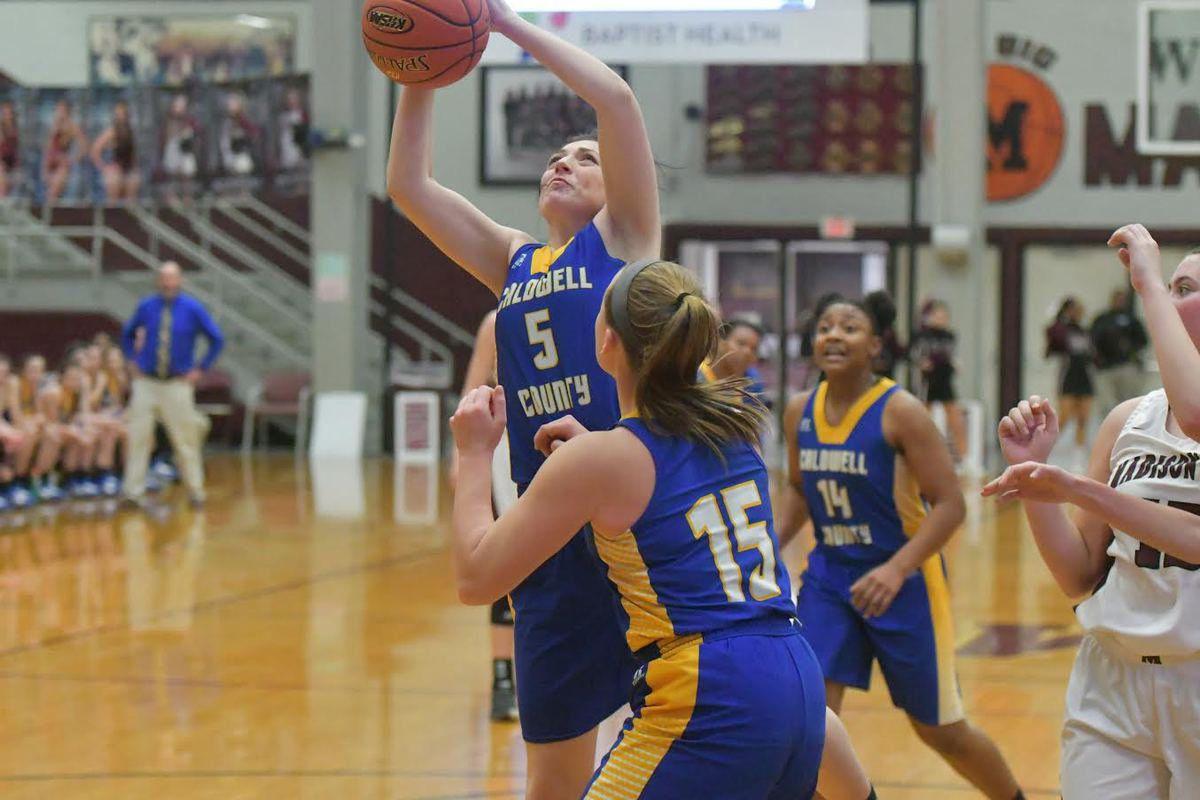 There would be no denying the stellar talent of Madisonville North Hopkins on this night; their second straight District 7 title.

Up against a top 5 girl's basketball team in the entire state, there were no heads held low on Thursday night in Madisonville on the Caldwell County bench, with three ties in the early goings.

Even in defeat, there is still basketball to be played in Christian County, and miles left to go before they sleep.

The Caldwell County Lady Tigers came up District 7 Runner Up for a second straight year after a respected first quarter fight in a 68-33 loss to Madisonville North Hopkins in the District 7 Championship game on Madisonville's home court.

The Lady Tigers have made the District 7 championship game three straight seasons, with their last title coming in 2018.

The Lady Maroons (27-1) would go on to win their 10th straight ball game fading back to January 18, and their third straight game over Caldwell County (16-14) after a 2-0 record with the Lady Tigers earlier this season.

Both teams will head to the Region 2 Tournament at Christian County this week.

Camryn LaGrange put the game away in the second quarter, pouring in 19 first-half points on the way to a game high 28 points, while Courtney Peyton added 23 points as the two combined for 51 of the Lady Maroon's 60 points in the first three quarters.

But was certainly competitive in the early moments.

"We thought the first five or six minutes we played pretty good basketball and then transition defense started to hurt us a little bit, they started beating us back down the court which we don't like happening," Lady Tiger head coach Chuck Mitchell said. "We wanted to cut out those layups and have someone back all the time and try to be a little more physical. It was just a little too much. It was just a buzz saw, it's a buzzsaw of a team right there."

After McConnell's bucket opened the game, a 3-pointer tied it for the Lady Tigers at 5-5 midway through one, and McConnell continued her strong start as the Lady Tigers drew fouls again bat the full court trap to keep the game tied at 7-7.

McConnell kept the Lady Tigers in the lead five minutes in at 9-7, but it would be their last.

fter Courtney Peyton gained the Madisonville lead back on an and-1 at 10-9, the Lady Maroons never trailed again.

A Lady Maroon triple and a Camryn LaGrange 3-pointer sparked 13 unanswered points to close the final few minutes of the first quarter.

The 13-0 run would send Madisonville North Hopkins up 20-9 heading to the second frame, but the Lady Tigers never wavered their best efforts despite going down double digits in such a hurry.

Courtney Peyton doubled up Madisonville at 22-11, and gave Majah Hollowell trouble defensively in the full court press, creating steals and upping the Lady Maroon lead to 18 points midway through the second quarter on another 9-0 run.

As Madisonville sped up the tempo, so did Caldwell County, misfiring on quick looks as the second chance opportunities seemed to quickly disappear.

Madisonville was unconscious in the second quarter from behind the arc, and Hollowell and Emily Campbell would be Caldwell County's only scoring option the rest of the game, scoring five of the seven Lady Tiger points in the frame as Madisonville North Hopkins took a 40-16 lead at the half; one that would never waver.

Caldwell County would commit 15 turnovers in the first 16 minutes, but did rebound well with parker down low showing out.

Hollowell picked up her fifth point from the charity stripe to start the second half and get Caldwell County within 22, but the Lady Tigers would get no closer the rest of the way.

LaGrange nailed her fourth 3 for her 22nd point to force Mitchell to a timeout at 49-18 Madisonville with 5:13 to play in the third quarter, and back to back fast break takes to the rim by the Peyton twins would Ignite the running clock at 56-18.

Courtney Peyton's left wing triple closed the third quarter at 60-21, with Caldwell County's buzzer beating 3-pointer being their only field goal of the frame.

Caldwell would score the first points of the third and fourth quarters as Parker got to the free throw line, and Jaggers finally got a 3 to fall with 2:50 to play as Caldwell went on to outscore the Lady Maroons 12-8 in the fourth quarter.

Zoie East and Jaylynn Mullen were named to the All-District 7 Cheer squad for Caldwell County.

Hollowell, McConnell and Jaggers were named to the All-District 7 team for the Lady Tigers.

Madisonville North Hopkins would score exactly 20 points in each of the first three quarters.

"We know they press right out of a made free throw and we were ready for that, but we had a few turnovers off that and they scored and they just started accumulating," Mitchell added.

"They have hands everywhere, you just can't get through them. We have to make good, crisp passes and get an open look and an open look is better than a turnover any day. We told the kids to stay positive, get better quarter by quarter and get ready for next week, and that's what we're doing."