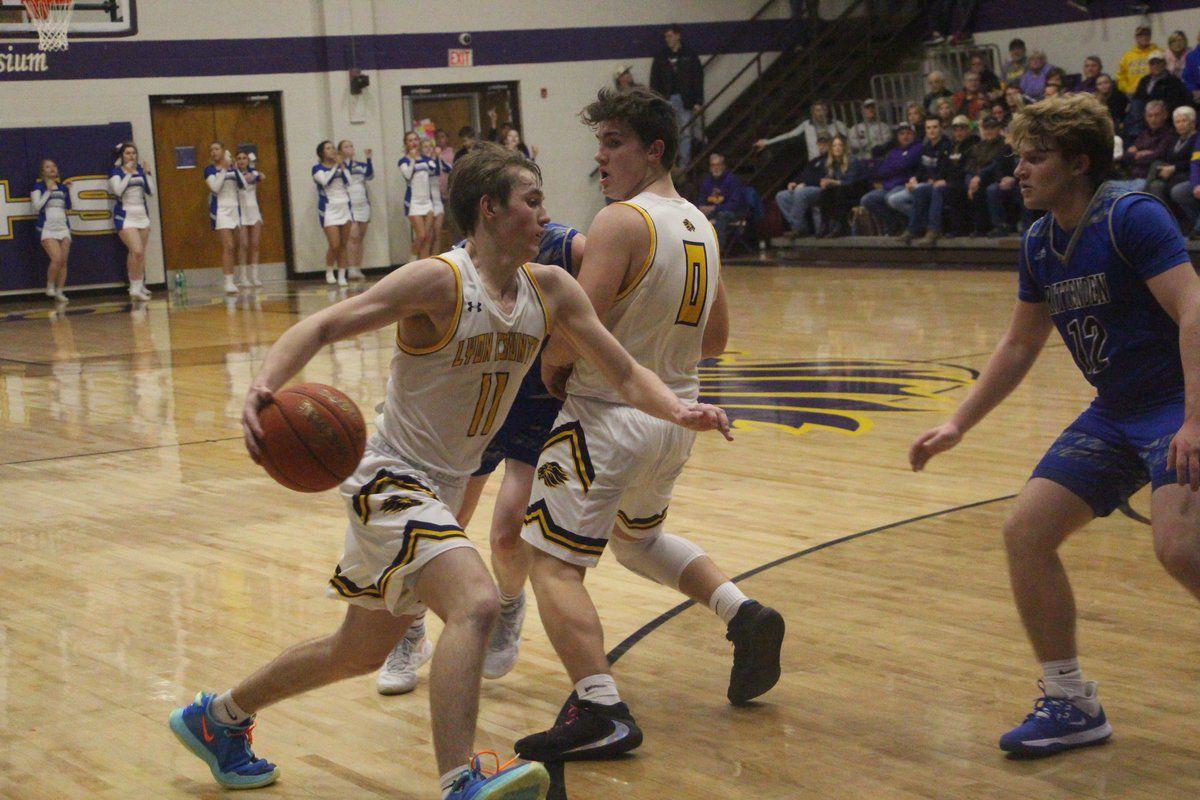 Lyon County guard Travis Perry drives off a pick by teammate Nick Whalin against Crittenden County in the District 5 Championship on Friday night. 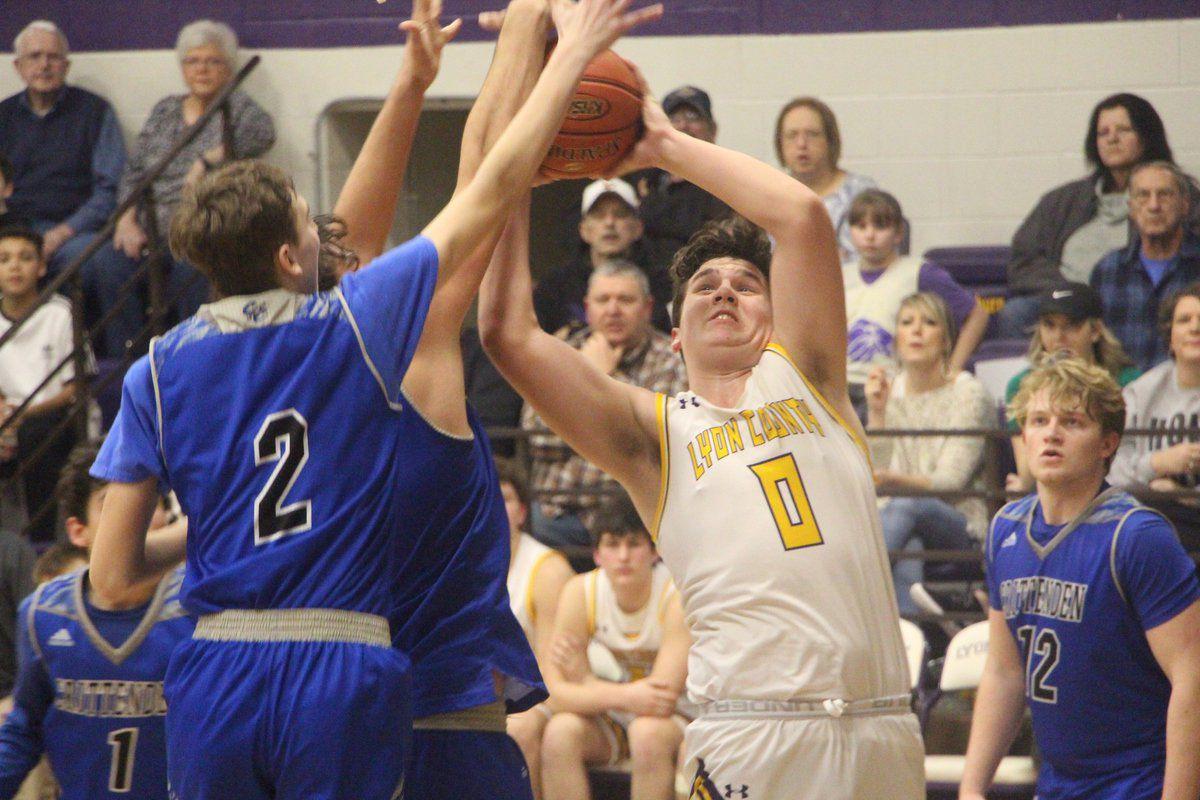 Nick Whalin gets to the rim for a big play against Crittenden County in Friday's District 5 Championship win.

Lyon County guard Travis Perry drives off a pick by teammate Nick Whalin against Crittenden County in the District 5 Championship on Friday night.

Nick Whalin gets to the rim for a big play against Crittenden County in Friday's District 5 Championship win.

Back in May, First year head coach Ryan Perry knew that Lyon County would soon be in this place.

So, he prepared them for number 20.

Anyone lucky enough to have witnessed the standing-room only atmosphere at Jason White Gymnasium with an estimated gate of $5000 would vow that high school basketball is alive and well in western Kentucky, and though it isn't their apex mountain with the Region 2 crown waiting to be grabbed history was made for the Lyons on a rainy Thursday night in Eddyville.

Once Lyon County took a four point lead in the first quarter, they never looked back the rest of the way.

"It felt like a war," head coach Ryan Perry said. "It was very physical and rough. We had to work for everything that we got and nothing was easy tonight. The guys just persevered and pushed through and when we had some tough strides there, we just kept going."

"We always seemed to make the right play at the right time it seemed like and we stretched that thing back out to keep a little bit of a lead. This team has gotten pretty resilient, pretty tough minded guys and it takes guys like that to win games like this, and what an environment for a high school basketball game tonight. This place was absolutely electric tonight. That was awesome."

Going back to back, the Lyons took the district title and their eighth straight win by storm, making due on the predictions of many as the Lyons were the District favorites coming into the week.

Luke Gilbert scored four for the Lyons, while Preston Turley led the Rockets with 18 points and 14 rebounds.

The Rockets had won four of their last five games coming in, and both teams would advance to the Region 2 Tournament in Hopkinsville.

The two times the clubs met earlier this season were very different results.

The Lyons, just two weeks later, were routed by 28 points in early January in Marion.

Shoulders began the evening with a left wing 3 on Lyon's first possession, but Tyler Boone came right back with one of his own to open the gates for Crittenden County.

Junior big man Preston Turley made his presence felt early on for the Rockets, but Shoulders would score nine of the first 11 Lyon points in the first four minutes in an 11-8 start midway through one.

Crittenden County led only briefly on two occasions in a first quarter that featured four ties.

Perry's first bucket came moments later on a step-back triple, and Bingham's scoop inside gave them a 16-12 lead.

Four points would be the biggest lead either way early on as the first frame came to a close at 19-18 Lyon County.

The Lyons would never trail again.

Playing with two fouls in the second quarter, Perry would somehow avoid a third the rest of the half, but it was Bingham with an eight point quarter to keep the Lyons out in front.

Shoulders' scoop and score would get the Lyons back to a four point lead, and though an emphatic swat by Gabe Mott of Crittenden followed, back to back layups by Perry and Bingham would help put Lyon County up as much as by nine, heading to halftime with a 36-28 lead.

The Lyons outscored Crittenden County 17-10 in the second quarter for the biggest gap of the night.

Shoulders breezed to the rim to take the Lyons up double digits to start the third at 39-28, and Perry traded 3's with Preston Morgeson before Boone knocked down the third straight 3 of the quarter to get the Rockets within seven.

Turley would cut the 11-point deficit to five at 44-39 midway through the third, only for Shoulders and Trey Hawkins to nail back to back triples to negate the damage, and the Rockets never got any closer the rest of the way.

Whalin's physicality proved fruitful down in the box and Perry's vision found Luke Gilbert unguarded as the Lyons would lead by as many as 16 points in the third, up 58-46 heading to the fourth and a second straight District 5 title on the line.

The Rockets crawled back to within nine with six minutes to play, but they would get no closer.

A straight away triple from Bingham would put Lyon back up 12 and ground the Rockets for good with five minutes to play.

Shoulders dazzled on another fast break finish, and the Rockets never got back within single digits the rest of the night.

Perry's and-1 off an inbounds steal and Whalin's and-1 to follow would seal it for good in the final moments.

Perry, Shoulders and Bingham were named to the All-District 5 team for the Lyons.