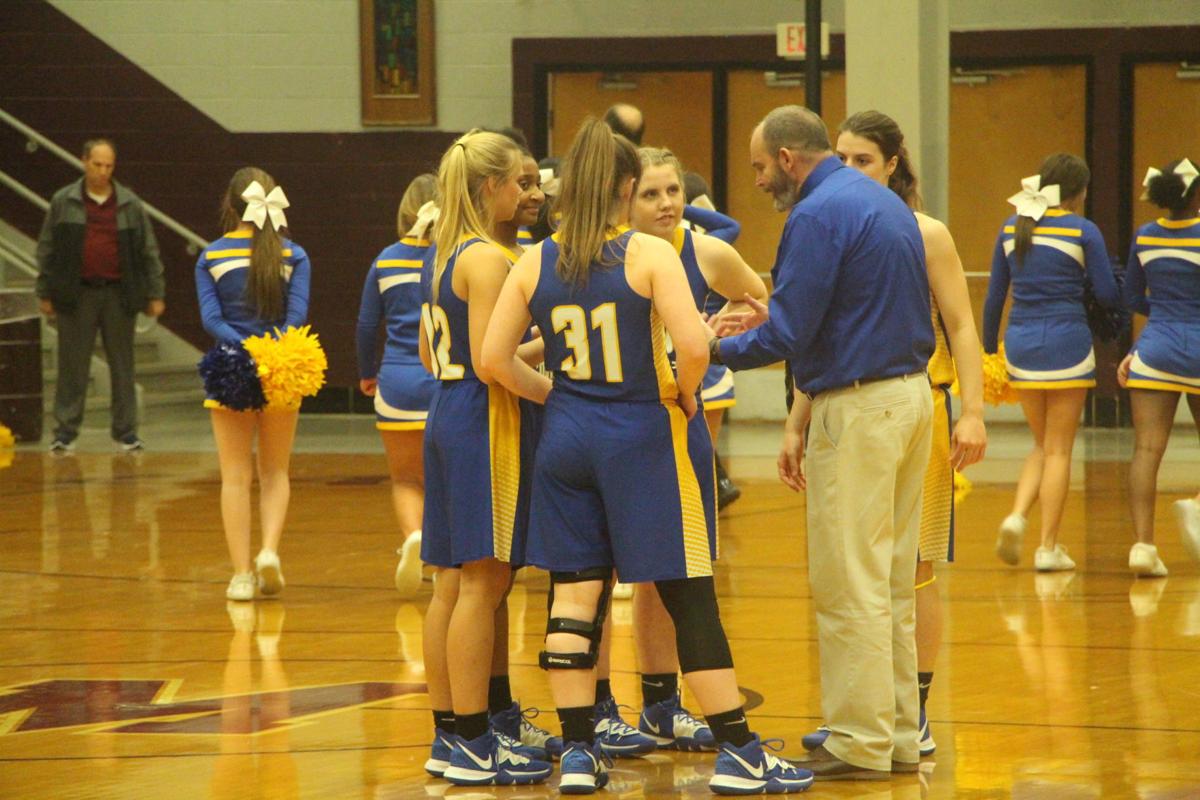 Caldwell County’s first season with Chuck Mitchell at the helm was a successful one, finishing the season with a Region 2 Tournament appearance and a winning record. 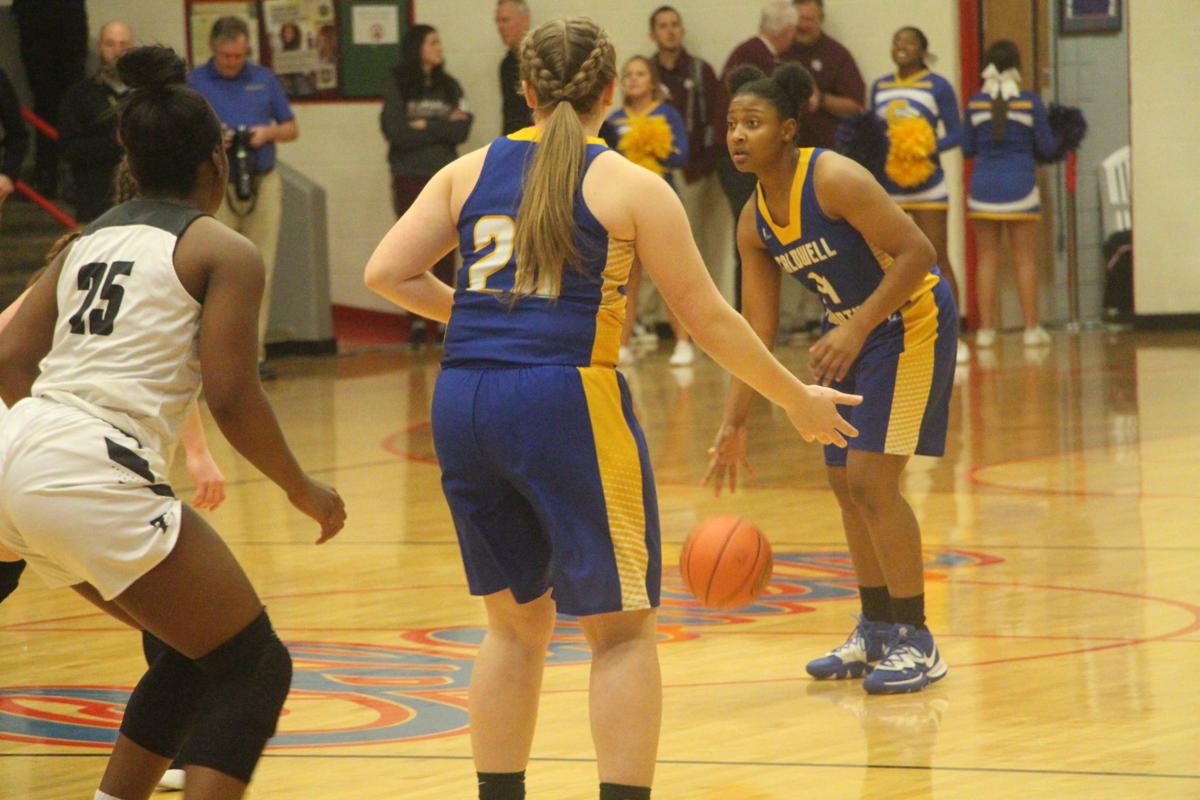 Caldwell County junior Majah Hollowell (right) will be a key returning piece for the Lady Tigers next season, while senior Bella McConnell (left) will graduate with more than 1,000 career points and 800 career rebounds as a member of the Lady Tigers for the last five seasons.

Caldwell County’s first season with Chuck Mitchell at the helm was a successful one, finishing the season with a Region 2 Tournament appearance and a winning record.

Caldwell County junior Majah Hollowell (right) will be a key returning piece for the Lady Tigers next season, while senior Bella McConnell (left) will graduate with more than 1,000 career points and 800 career rebounds as a member of the Lady Tigers for the last five seasons.

The Caldwell County Lady Tigers believed their time was here and now.

The Lady Tigers had multiple three-game winning streaks, an All-A Region 2 Championship game appearance, and only lost more than two games in a row on one occasion, and that was mired in their first stretch without point guard and primary ball handler in senior Jada Boyd and multiple other players as the injury bug hit this Caldwell County club with a swiftness.

But, under first-year head coach Chuck Mitchell, these Lady Tigers somehow found new life, and a renewed purpose when faced with the biggest crossroads of their season after losing their point guard for the rest of the season and, losing to rival Lyon County by 19 points in the All-A title game at Dawson Springs before losing to Trigg County a week later with only two players scoring more than one tied goal. What followed afterwords, was a revenge win at Lyon County, a three-game winning streak after that and another District 7 Championship appearance against Madisonville North Hopkins.

For their season to continue, Caldwell County had to face the same Trigg County bunch that had handed them a loss, and the same one that they had taken out by 24 points two weeks before.

The Trigg County Lady Wildcats would go on to win the Region 2 quarterfinal round at Christian County, 65-53, and while the Lady Tigers had plenty to play for, no one had a bigger drought without a win in this tournament than Trigg, who won their first regional tourney game since 1990.

“Going into the game, we thought we were really prepared and, I believe that mentally we were prepared,” Mitchell said. “We didn’t make some shots early and they did. When you miss 14 free throws and lose by four, it wasn’t our night, but at the end of the day when we wend into the locker room, we celebrated our seniors and we didn’t talk about any of that. The biggest thing for the kids is growing and getting better in the spring and summer, going into next year.”

The Lady Tigers found themselves down by just one point at 42-41 midway through the fourth quarter, but a 6-0 Trigg County run and a 21-point performance from Olivia Noffsinger would seal it, and put a close to a 16-15 Lady Tiger season, a winning record for the first time since 2017 and a three-win improvement over last season.

Along with Jada Boyd, were two fellow seniors in Bella McConnell and defensive mind and 3-point specialist Lucy Goffinet.

McConnell and Goffinet finished their Lady Tiger basketball careers strong, with McConnell pulling down a double-double with 14 rebounds and 12 points and Goffinet coming up with two big 3-pointers on the way to eight points to keep the Lady Tigers within striking distance until the very end.

Even junior guard Majah Hollowell went for a team-high 19 points in an explosive performance, but Trigg County seemed that they would let anyone else beat them except for the teams top bucket-getter; junior Jacey Jaggers.

Jaggers had played with a partially torn ACL for most of the second half of the season, but was limited to four points on just 1-of-7 shooting from the field as the Lady Wildcats put on the defensive clamps.

Jaggers was set to have surgery to fully repair the ACL injury immediately following the season.

“Trigg definitely was on a roll. They did a good job,” Mitchell added. “They defended us well and our defense was non existent in the first half, we let them get to the rim and other people had to step up since they were locking Jacey down. It was tic for tac, getting Jacey and Bella out for defensive purposes, but then suffering on offense. We were trying to walk that fine line.”

While Jaggers will be returning for a full season next year, one of the beneficiaries of Trigg County’s mentality to stop Jaggers from going off, was Goffinet, who was fighting for her high school basketball career.

“She freed herself up and people were locking down Jacey and Bella a little bit. She’s capable of hitting that shot and we’ve been wanting her to take those shots all year,” Mitchell said.

“We’re really pleased with her and she kind of kept us rolling.”

It is safe to say that former Rowan County head skipper Mitchell, a health and P.E. teacher at the Caldwell County middle school, has been positively impacted by this community in his first year, and is set on these kids and this program for seasons to come.

“Oh my goodness. The kids are fantastic and the administrations at the middle school and the high school are just fantastic, top of the line,” he said. Our superintendent supported us and I love it here. I love the girls. I’ve met some really interesting folks and I can’t wait to get started on next year.

“I’ve coached high school while teaching at the middle school before and I didn’t know how it was going to work out. It’s so close to the school in proximity and Mr. Smiley is such a good principle and his wife as an assistant helps get me out there in time. It hasn’t been a big issue with my wife working at the high school. They all get to see her and ask her equations if they need me.”

While every team in high school deals with various injuries throughout the basketball season, hardly anyone had them so fast and so close together as the Caldwell County lady Tigers did this season, with injuries to senior Jada Boyd (a season-ending knee injury), A.J. Hollowell, Paris Gray and a partially torn ACL injury to Jaggers.

“We missed Jada a lot. she put us into a different style,” Mitchell said.

“It could have been really bad. We figured it out after the first Trigg County game is when we finally started to figure out what we had to do to win ball games and to compete in games,” he said. “Being positive was something we really worked on. We had an ACL injuries, we had foot injuries, a shoulder dislocation and I could go on and on. I was proud of the girls for stepping up and fighting. We had a winning season and that’s a big thing.”If there’s one player who could play through any of those injuries, it would be junior power forward Karsyn Parker, or as Mitchell calls her, their silent hero.

Parker and her rebounding this season was a crucial as any element for the Lady Tigers this season.

Parker averaged 6.3 rebounds per game this season ,but the numbers skyrocketed late in the campaign as the calendar turned, including a 19-rebound contest against Trigg County in the Region 2 Tournament opener.

Parker had 15 rebounds against Hopkins County Central in mid February, and in tournament postseason play combined for 37 rebounds in the three-game stretch.

“She’s a monster on the glass. We’re going to work with her on her shooting and her free throws,” Mitchell added. “We’re going to work with her all on the offensive end, because she’s a great defender. She can defend, she gets deflections when she’s guarding the post or she can go out and guard a guard. She is one of the MVPs of this year, no equation. She’s kept us in so many games and she’s our silent hero. I’m hoping that she gets recognized next year in the region.”

“She is very savvy on the defensive end. We’ve put some defensive assignments in for her and she was really guarding a few at the time, getting back to her man dan getting deflections. Very seldom did she get beat by the bigs of Trigg. Even when we didn’t have help behind her, she would find ways to get the ball to us and get a deflection. Like I said, we’re not in games without Karsyn Parker.”

The biggest loss next season for Caldwell County will likely be that of McConnell, who scored more than 1,000 career points and 800 career rebounds to join the top 15 all-time Lady Tiger scorers, but there is plenty coming back next season to believe that the Lady Tigers can compete for an All-A Regional Tournament and another berth into the Region 2 Tournament.

McConnell was the team leader in points (12.7 ppg) and rebounds (7 rebounds per contest) this season, finishing with 1,289 career points since her eighth-grade season in 2015-16.

McConnell scored 394 points in her junior season and 394 in her senior season.

“Bella played sick during the Class-A Tournament, she’s had a few injuries herself and it never really affected her being on the court, just some of her game,” Mitchell said. “She played through it, she’s a leader and you’ve got to respect that. She is a good leader, she’s the first one to practice, the first one to games, the last one to leave. She came up big with a double double the other night.”