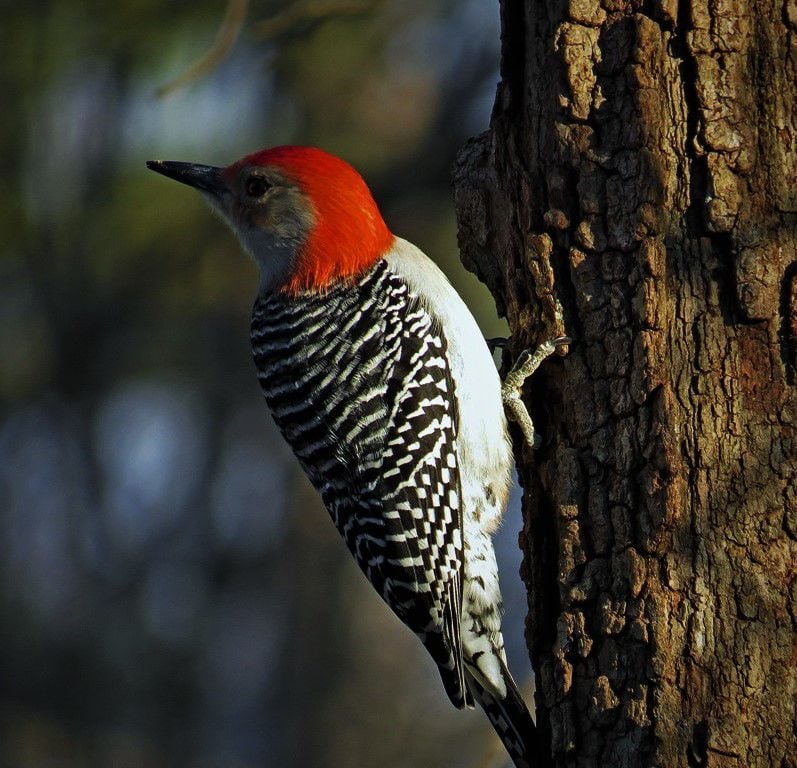 The red-bellied woodpecker, this one a male, is better identified by its zebra-striped back. 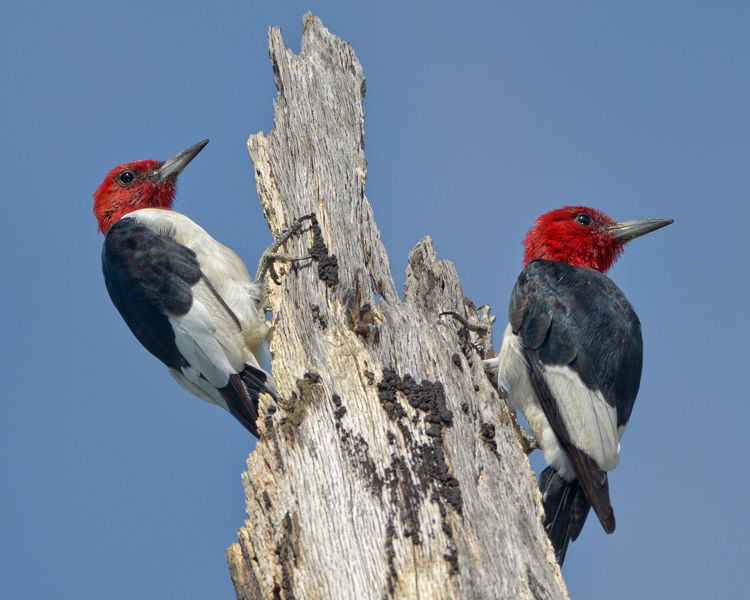 Left: Genuine red-headed woodpeckers have all-red heads and their bodies are “checkerboard” black and white, not thinly striped.

The red-bellied woodpecker, this one a male, is better identified by its zebra-striped back.

Left: Genuine red-headed woodpeckers have all-red heads and their bodies are “checkerboard” black and white, not thinly striped.

If we were to designate a generic woodpecker for our part of the world, it probably ought to be the one properly identified as the red-bellied woodpecker.

I wish we could have given it a less confusing name from the outset, however.

This species is a medium-large pecker of wood that does all those woodpecker things that we come to expect. It is one of the more common woodpecker varieties and is quite routine in our region. It prospers in oak-hickory woodlands but does very well where tree cover is broken into strips and patches like around suburbia.

Yet, for all its visibility and commonality, more often than not, the red-bellied woodpecker goes unidentified with much of the public. It is perplexing, indeed, because we generally do not see a red belly on this species, but we do see red on its head.

Our basic, hardy, everyday woodpecker, the red-bellied woodpecker, is a rounded-headed (non-crested) variety that stretches to about 9 inches long. Its back is a zebra-striped pattern of sharply contrasting black and white.

From a distance, perhaps this bird’s back might be seen as gray. Closer, however, the contrasting thin black and white stripes are a clear indicator of its identity: a red-bellied woodpecker.

Yet, this woodpecker’s belly generally is not red. This bird has a white to light gray belly. Some will have mere hints of red on breast and belly, but in the practice of casual observation, people rarely notice this on a red-bellied woodpecker. When it is on a tree trunk, you see no belly at all.

Meanwhile, the species that is correctly labeled as a red-headed woodpecker has a head that is completely red and a body that is so boldly blocked in black and white that is sometimes referred to as checker-boarded. The back is solid black (not striped) as is the tip of the tail. The lower wings are solid, vivid white as is the breast and belly.

Red-headed woodpeckers have been in decline for a half-century or so, thought to be from loss of bigger woodland habitats. Hereabouts, we really do not see them all that often. Red-bellied woodpeckers, meanwhile, have been increasing both their numbers and their range for decades. They are our most observed sizable woodpeckers.

If any are more frequently seen here, it would be the downy woodpeckers. These are the smallest of our woodpeckers, little critters of about 6 inches long. These miniatures pick insects out of tree bark, too, but they catch flying bugs and mix in other behavior — often hanging out with the likes of chickadees, tufted titmice and such — so it is easy to dismiss them from among more typical woodpeckers.

(I just saw a male red-bellied woodpecker out the window here. He stopped for a bit to probe on a dying arborvitae tree. Even at modest distance, his back looked gray instead of the black/white zebra striping that a close-up look would have revealed. His bright red on the head was glaringly apparent. No wonder people are confused by them.)

The red-bellied makes a living primarily by pecking insects, spiders and other orthopods out of crevices in tree bark. They do not actually bore into the wood as much as some woodpeckers, especially the big pileated woodpeckers.

As a year-round, non-migratory species, the red-bellied woodpecker must feed itself in winter when bugs are hardly as available. At that time, the bird makes do with a greater percentage of seeds, acorns and other nuts, hackberries and what fruits it can find.

Red-bellieds do put their beaks to work more during nesting season. Males start their courtship by pecking out a cavity in a dead tree or dead branch on an otherwise living tree. When they aren’t digging, they peck lightly as a sort of signal to any available female. When a lady accepts, she joins the male and helps him finish off the nesting cavity.

These common woodpeckers are not as noisy as some species. Again, the huge pileated woodpeckers are the loudest, most raucous of all. The red-bellieds, meanwhile, are generally soft-calling, most often communicating with a modest “chiv chiv” as they go about their business. If you have spent any time in the woods, you have heard it often, maybe without knowing what was making the call.

Other red-bellied “talk” is a light pecking on wood that is correctly labeled as drumming. Instead of a robust hammering, however, the zebra-backed woodpecker drums rapidly but delicately. The drum seldom lasts more than one second, but it typically comes at a rate of 19 taps per second.

How do you move your head that quickly?

Misidentified though they often may be, red-bellied woodpeckers are mainstay residents of our forests, woodlots and even our neighborhoods. Provided we are not prey-worthy bugs in the path of their pecking order, it is good to have them around.