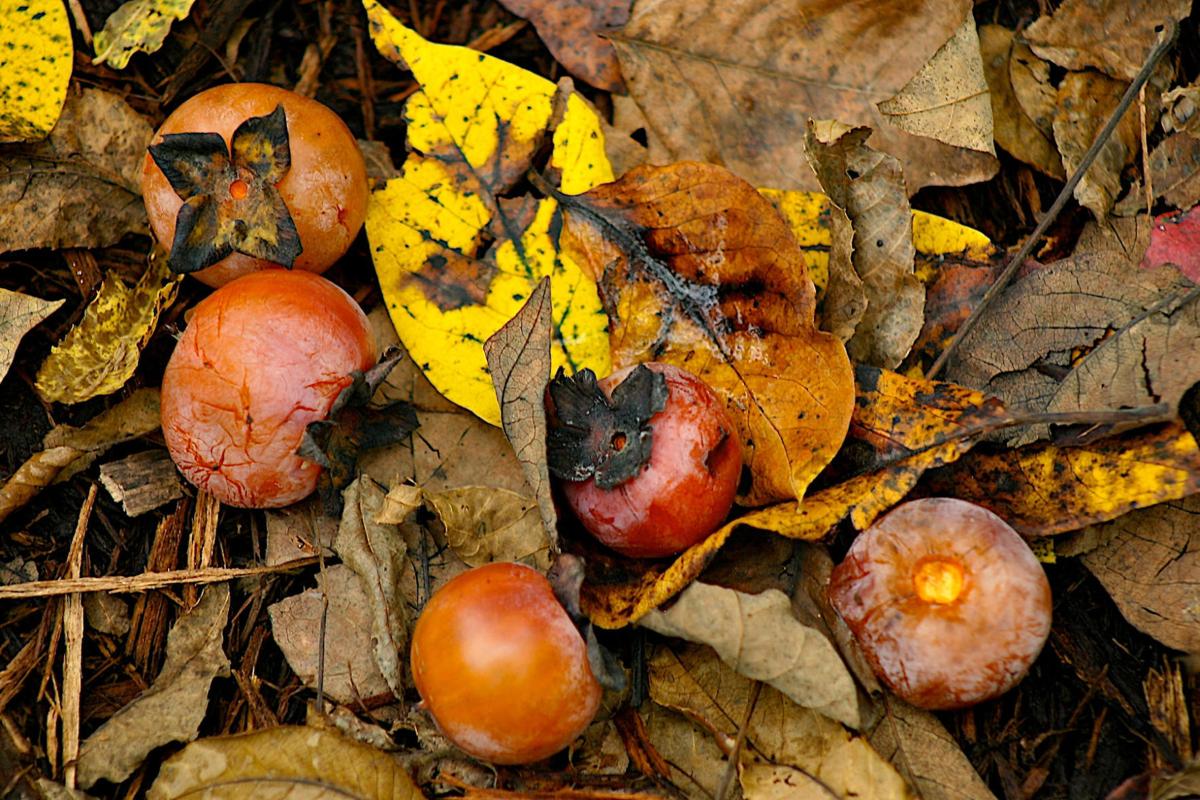 Above: When persimmons have dropped, softened and grown ugly, they’re about right for consumption. Left: You could eat green persimmons off the tree ... if you don’t mind your lips turning inside-out. 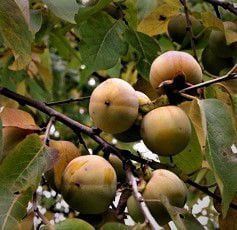 You could eat green persimmons off the tree ... if you don’t mind your lips turning inside-out.

Above: When persimmons have dropped, softened and grown ugly, they’re about right for consumption. Left: You could eat green persimmons off the tree ... if you don’t mind your lips turning inside-out.

You could eat green persimmons off the tree ... if you don’t mind your lips turning inside-out.

Persimmon trees and the fruit that grows on them really don’t know anything about what the weather is going to be like in coming months.

Our ancestors seemed to think that persimmon seeds were forecasters of winter weather. That was an old wives’ tale. Old husbands probably told that, too. We continue to tell that today because it is folksy and cute, but some folksy, cute people accept it as fact mostly because they always have heard it.

The American persimmon, Diospyros virginiana, is a neat native tree. There are Asian import varieties on our soil now, but here we are talking the original equipment of the southeastern U.S. It was a valuable forest feature for native people long before there were United States.

The persimmon tree is a medium-sized tree, growing to about 60 feet at maturity. It has unique bark — dark gray, deeply furrowed and “blocky,” growing into rows of squares or rectangles. In the dead of winter, when trees are barren, the bark on a persimmon tree is usually enough to clearly identify it from other species.

Wood of persimmon trees is among the hardest of our hardwoods. This characteristic led it to be used as a natural material for making golf club heads. The density of persimmon-headed drivers and woods apparently has allowed golfers to make some lengthy whacks.

Persimmon leaves are elongated oval growing from 2 to 6 inches long. They sprout alternately on the branches. Leaves go from summer green to yellow as fall foliage nowadays.

It is the fruit of persimmon trees, the persimmons themselves, that gets most recognition. The female trees in the spring produce greenish-yellow flowers that grow into fruit during summer. Each of these persimmons may be three-fourths to 1¼ inches in diameter.

The fruit goes from green to pinkish to orangey-pink with brown and smoky shadings as it ripens on the tree or even as it drops to the ground before or after autumn temperatures produce frost.

A few ripened fruits may remain on the tree into winter. A few unripened fruits may fall to the ground as early as late summer. Most persimmons soften, change colors and detach from the trees along about the time of the first frost or two.

Ripe persimmons yield a natural sweetness that has been appreciated by native people and early European settlers. Persimmons found their way into a variety of foods to add a sweet touch along the frontier and early settlements.

There are indications that Indian peoples made a beer-like drink using persimmons.

Natives, European-Americans pioneers and everyone since learned early on that you do not eat underripe persimmons. They are dramatically bitter with an astringent that will give you an extreme puckering effect.

The persimmon pucker power comes from tannins that only fade when the fruit ripens. Most fruit that is on the tree ranges from slightly to high astringent. Typically, it is the persimmons on the ground that are ripe enough to endure.

Ripened persimmons are usually darkened and deeper orange in color, which goes along with the softer, mushier texture of fruit that has been exposed to frosty temperatures. As a rule, the uglier the persimmon, the greater chance it will be sweet and free of the astringent, puckering effect.

Do not eat that firm, pretty persimmon that is still on the branch. Although its color may be orange, chances are it is still effectively green in terms of the ripening process and rather unpleasant to the taste and mouth.

The problem with picking ripe persimmons off the ground is that something else is liable to beat you to them. All kinds of critters regard persimmons as dessert-quality forage. Everything from deer and (where they exist) bears down to the smallest rodents and insects on their feeding rounds will learn to check out local persimmon trees.

I sometimes hunt near a favorite persimmon tree. In the times while stationed there, I have seen the persimmons attract diners from the deer, raccoon, ’possum, skunk, squirrel and coyote communities. And those were just the persimmons that were somehow left behind by the cattle. (The cows have first claim because the location is not a deer, ’coon, ’possum, skunk, squirrel or coyote farm.)

Aside from some deer hunters, most human awareness of persimmons nowadays relates to their legendary ability to predict the coming winter’s weather. That forecast is supposed to lie inside persimmon seeds.

Folklore has it that you can extract a seed from a ripened persimmon fruit, split the flat seed in two to yield even thinner halves, then look for the shape of an implement revealed in the impression of an inner sprout.

It is troublesome carefully splitting thin seeds, so most casual persimmon researchers probably do not examine many. They may do one and call it good.

During any given year, chances are splitting several seeds would show a variety implement profiles inside. But that would confuse the issue and cast doubt on the folklore.

And what fun is there in that?