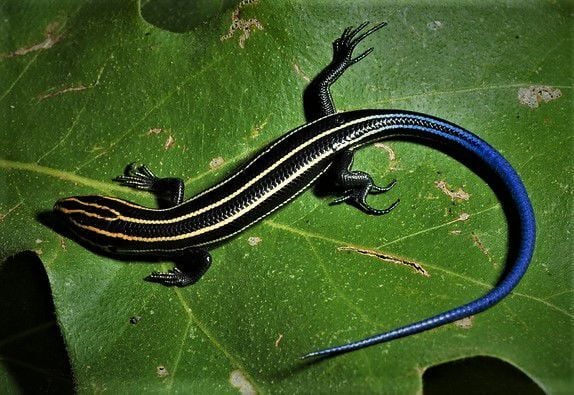 The stereotypical “blue-tailed lizard” hereabouts is a juvenile five-lined skink, one boasting that vivid blue (and detachable) tail.

When a five-lined skink matures, it turns more tan to olive to brown, including the tail, and males develop a red color on the head during breeding season.

The stereotypical “blue-tailed lizard” hereabouts is a juvenile five-lined skink, one boasting that vivid blue (and detachable) tail.

When a five-lined skink matures, it turns more tan to olive to brown, including the tail, and males develop a red color on the head during breeding season.

A new class of skinklets is afoot out there.

I’m not sure what else to call the young- sters of five-lined skinks. Puppies, calves, chicks, fawns — all those seem inappropriate.Maybe it should be simply baby skinks or little bitty lizards, which is what they are.

The five-lined skink is probably our most common lizard hereabout. If the name doesn’t sound familiar, it is that blue-tailed lizard. It is not rare to hear the little reptile described as a blue-tailed scorpion. Many do, indeed, pack blue tails, but these are lizards, nothing close to scorpions. Skinks certainly do not have stingers, and they aren’t venomous in any way.

Lots of observers think we have more kinds of lizards around than we do. Most of what are seen might be five-lined skinks, but these same miniature reptiles appear differently based on their age and sex.

An adult male skink might be 7 to 8.5 inches long, although anything topping 8 inches could be considered a whopper. These are typically tan to olive in color, including the tail. An adult male usually has a black stripe down each side of the body and lighter striping above. In the breeding season, much of the spring, male skinks develop a red-orange color on the head. That fades later in the season. Adult females may grow to 7 inches or more, but they tend to be brown in color with tan to darker brown side stripes from the head down to the base of the tail. The tail itself is usually medium blue to blue gray in color.

Meanwhile, juveniles of both sexes are typically black with five yellow stripes running in linear fashion along the body, but the tail on these younger ones is standard as brilliant cobalt blue.

These most-familiar blue-tailed lizards are by far more plentiful and usually 4 to 6 inches in size. There’s good reason why the tails on the younger, probably more vulnerable little skinks are the most vivid in color. For a potential bail-out against predation, they need to command attention.

Like some other species, a five-lined skink has a tail that is rather easily detachable. If the skink gets itself in a scrape with something big enough to eat it, the restrained lizard can allow a slight bit of pull to pop off the tail from its lower body. Not only that, the detached tail then curls and wriggles on its own, the bright blue squirming member hopefully provoking enough aggression from the predator to allow the tail-free skink to scuttle away. Better to sacrifice a tail if the rest of you can escape to fight another day. And that makes even more sense when you realize that the skink can re-grow its tail.

The skinks themselves are predators, but they are so small that it is chiefly just insects that make fitting prey. On the other hand, skinks maybe be captured, killed and eaten by snakes, birds of prey, predatory mammals like foxes and domestic cats, and even omnivores like ’possums and skunks. In the web of eat and/or be eaten, size really does matter.

Because they are quite voracious and aggressive even as tiny little things, we probably should remember that five-lined skinks are ultra-minimal leftovers of the dinosaur age. If they were our own size or larger, they would likely be opportunistic predators of humans. Skinks are completely harmless to us (and that probably really irks them). But in an inescapable one-on-one encounter, a skink will still go down swinging. The times I have captured skinks to remove those who have ventured indoors or something, those being displaced have always bitten viciously in seeming self-defense. They don’t have enough jaws and significant biting force to really hurt us, but they always draw on their inner dinosaur in resisting. Right now, there are the smallest of the small skinks that might be encountered.

The adult lizards breed in spring, and mama skinks find nesting spots in rotten wood, under rocks and in various debris in which to lay eggs.

Mom skink deposits about 4-14 eggs well smaller than jellybeans. About two months after deposit, miniature bluetails hatch from the egg clutch that long has been abandoned by the adult female.

The hatchlings — or skinklets if you like — break out of their little orbs and hit the ground running right away. They don’t get any parental care, and they don’t need it, thank you.

Despite being small of stature (but having great speed and a testy attitude), young skinks do OK for themselves.

The hatchlings I am seeing now are maybe a little more than 2 inches long and growing nicely. There is no shortage of insects to spur along such development.Unlike so many insects on which they feed, five-lined skinks are not a flash-in-the-pan life form. They do not reach sexual maturity until about 2 years of age. And the lifespan for a skink that successfully dodges larger predators is about six years in the wild. So, when you see one of those “blue-tailed scorpions,” rest assured that it is not a scorpion and it is totally harmless. Grab it and you can get him to bite, but you can’t get him to hurt you. If it still has that bright blue tail, it’s even kid stuff.