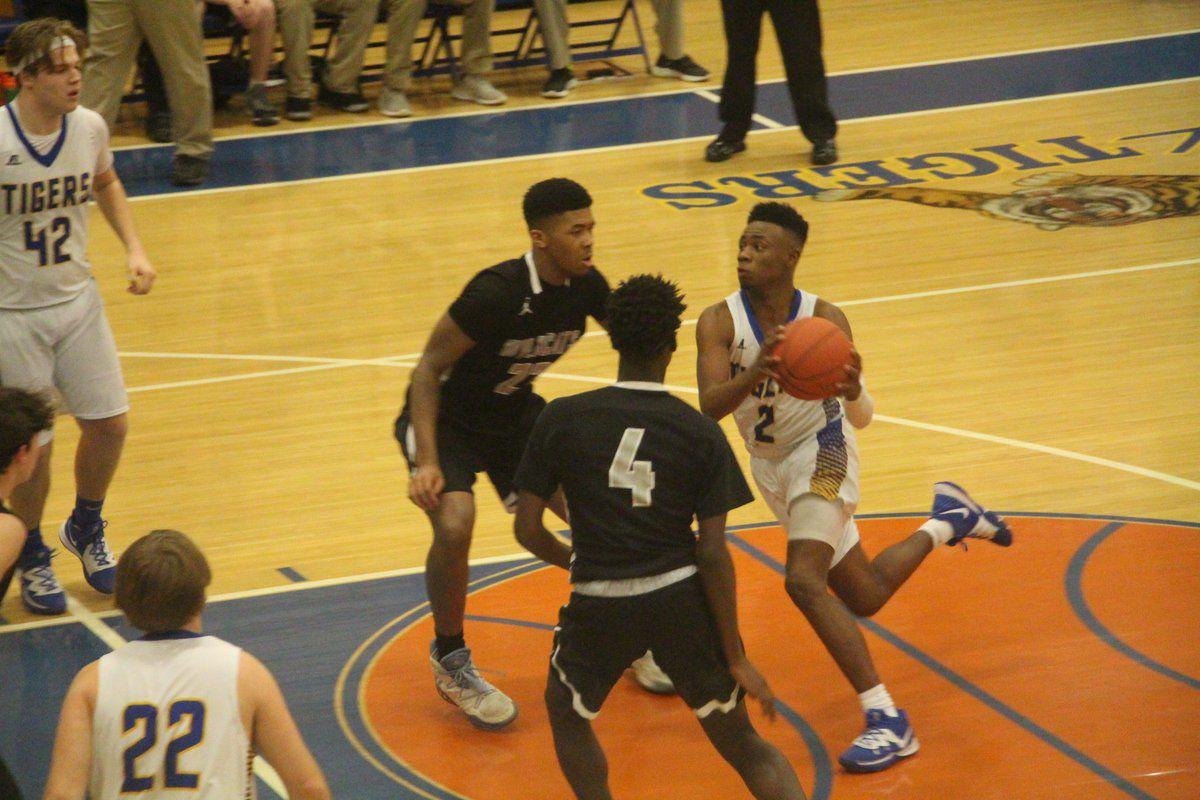 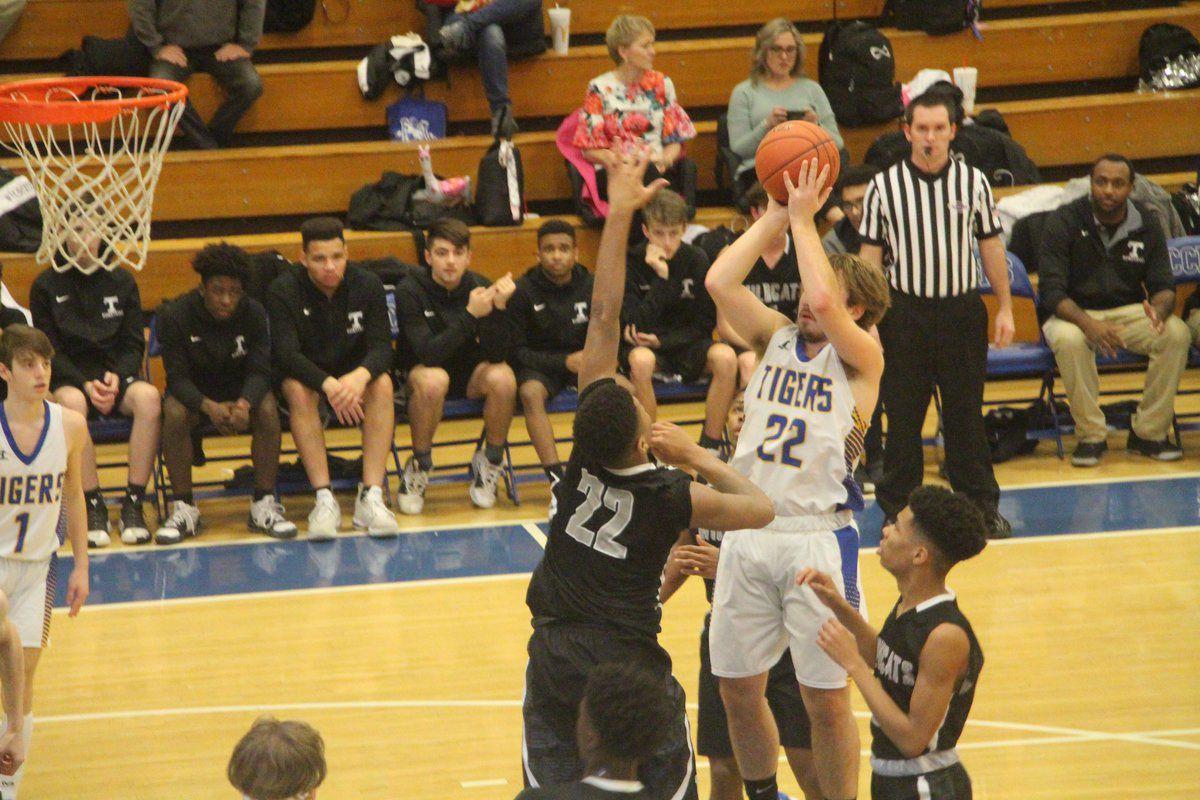 Caldwell County guard Cayden Fraliex puts up a jumper against two defenders in a Friday night win over Trigg County.

Caldwell County guard Cayden Fraliex puts up a jumper against two defenders in a Friday night win over Trigg County.

In their fourth game in five nights, coach Daniel Kukahiko's Caldwell County squad looked fresh as roses on Valentine's night, and broke the hearts of Trigg County quite early and without warning 66-45 at the CAB in Princeton as the final week of the 2020 regular season winds down.

Tripp Branch went for a game-high 17 points as he made all five of his three-point attempts, Cayden Fraliex scored 16 points, Adarius Riley scored 15 and Jamarius Blaine went for eight points.

Jhaden Vaughn led Trigg County with 15 points, but the Wildcats never got closer than nine in the second half.

As hot as they were from downtown on Thursday night when they made 10 3-pointers against Dawson Springs 24 hours prior, the Caldwell County Tigers started off Friday night's doubleheader at the CAB with Trigg County the same way, and never trailed in the game as they continue to look like a much different ballclub than the one that started the season 0-5.

Putting up over 80 points at Cadiz back in January in their first meeting with Trigg County, the Tigers looked to replicate the pace as they swept the season series with the Wildcats.

The Tigers (13-14) have now won four straight games and went a perfect 4-0 on the week, while Trigg County (10-17) has now lost a frigid five straight. Caldwell County has won their last five games against Trigg County.

"We defended very well tonight. We defended ball screens and rebounded the ball well," Tiger head coach Daniel Kukahiko said. "You do those things and force teams into tough shots and, don't get me wrong, they made a lot of tough shots, but we held them to 15 points in the first half and that's a solid defensive effort."

"We're not looking past UHA on Tuesday. We've had a good week and we want to have another good week on Tuesday. Just keep doing the things that we've been doing well. We shot the ball well, we've handled pressure and cut down on turnovers and made free throws. If you can take care of the ball and make free throws down the stretch, you're going to find yourself in a lot of ball games."

Fraliex and Branch made back to back triples for a 6-0 Tiger start, and a Fraliex pull up jumper made it 8-2 Caldwell midway through one.

Fraliex got his third shot to fall to keep the lead extended at six, and T.J. Ray provided strong early minutes at the guard position as the Tigers led 14-9 heading into the second quarter after early foul trouble for Trigg's Jhaden Vaughn.

A 4-0 spurt from Adarius Riley doubled up the Wildcats at 18-9 in the early moments of the second period, and Branch nailed a left wing 3 for Caldwell's first double digit lead of the day at 21-11 with 5:10 to play in the half.

Riley broke through the teeth of the defense with an and-1 scoop at the rim for their largest lead yet at 14 points, and Caldwell County would never have doubt in that brilliant first half, leading by as many as 15 points and holding Trigg County to half of their offensive production on the way to enjoying a 30-15 halftime lead.

Branch was fouled on a 3-point attempt to open the second half, making good on all of his free throws to extend to an 18-point lead.

Blaine improved his position on a fancy finish moments later, and the Tigers would balloon the lead to 20 at 40-20 midway through the third.

Trigg County made noise when they trimmed it to 11 via a 9-2 run at 44-33 after a long ball by JaKobe Bridges heading to the final eight minutes in Princeton after three frames.

Vaughn cut it to single digits for the first time since early in the second quarter at 45-36 on a left wing 3, and Tyler Ahart knocked a similar shot down with five minutes remaining to keep the deficit at nine, but the Wildcats would get no closer in the final four minutes despite constant defensive pressure in the full court in an attempt to create late turnovers, as the Tigers pushed it back out to 20 by the time all was said and done.

After a perfect 4-0 week, the Tigers will close the regular season at home this week with University Heights on Tuesday at 7:30 p.m. and then Livingston Central on Friday for Senior Night.

"T.J. has been giving us big minutes all week long," Kukahiko added of guard T.J. Ray.

"Coming off the bench, he made some plays there. He came in there on the first possession and 20 seconds into the game made a short corner jumper and got some defensive stops in the right position. Those are things that you have got to have. Especially going into the postseason, it never works out the way you planned. We have seven, maybe eight or nine guys that can come in at any point in time that bought in and know what we're trying to do to help us get a win."