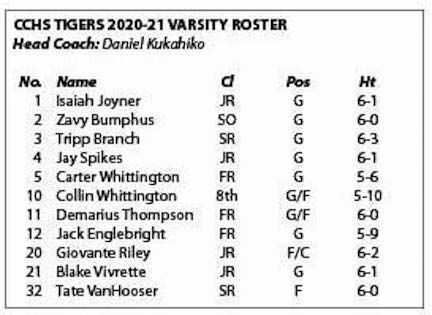 After being off the court since last March and having to postpone practices and the 2020-21 schedule by about a month, the Caldwell County High School boys’ basketball team is more than ready to get things started.

“We’re excited and ready to get going, just like every team in the state of Kentucky is,” said ninth-year head coach Daniel Kukahiko last week.

“It’s less than a week to tipoff, so I’m looking forward to it.”

The season opens for the Tigers on Monday at Webster County.

Kukahiko has a young roster this season after graduating six seniors last year.

“There is no real way to practice or simulate a game,” he said. “We just try to prepare our guys for as many situations as possible that we’re going to face.”

Kukahiko said the effect that COVID-19 has had on this year’s preparation has been bad and, in its own way, good.

“We got a lot more time in the gym with our entire team than we did in years past because of the success of the football program,” he said. The football Tigers advanced to the first round of the state playoffs in November. “We were also able to take a few days off around the holidays, which is a good thing, to spend some time with family, but as far as the X’s and O’s, it really hasn’t changed too much.”

Kukahiko said he was counting on team leaders to help with the less experienced players this year in the Tigers’ bid to improve on last year’s 16-16 mark and 4-2 District 7 record.

“We’ve got two guys coming back who have played a significant amount of varsity experience,” he said. “Tripp Branch (12.7 ppg in 2019-20) will be a senior and Jabrion Spikes (5.9 ppg last year) will be a junior. Those two guys — they’ve proven themselves over the last two years, so we’re really looking forward to seeing what they can do this year.

“We’ve got lots of new faces that are coming in that are going to be asked to contribute at an early age.”

Kukahiko said that he hasn’t got a specific starting five in mind yet, but there are six or seven players who are starting to materialize as starters for the Tigers.

“I think there are some guys who are starting to separate themselves,” he said. “On any given night, we’ve got eight or nine guys that can really help us, and that’s a good problem to have.”

CCHS has the first round of the All A Classic early on the schedule, hosting Livingston Central on Jan. 12. Kukahiko said that, due to the schedule being pushed back into January, the first week of play will be big.

“Webster County is always a well-coached program, so they’re going to be ready,” he said. “They bring back a lot of guys from last year. Then, we’ve got Madisonville on Friday, a big district game coming out of the gate, and then, we’ve got the All A.

“We’ve got a lot of games early. Normally, as a coach, you want to have some non-district games to get you ready for that. We don’t have that luxury this year.”

However, the team saw 12 of the 15 players take part in at least 15% of the games, providing much-needed experience to several players.

“Our goal is to compete every single night,” Kukahiko said. “I think that we have the squad right now that will enable us to overcome those bad nights. If one or two guys have an off night, we can absorb that on our team.”