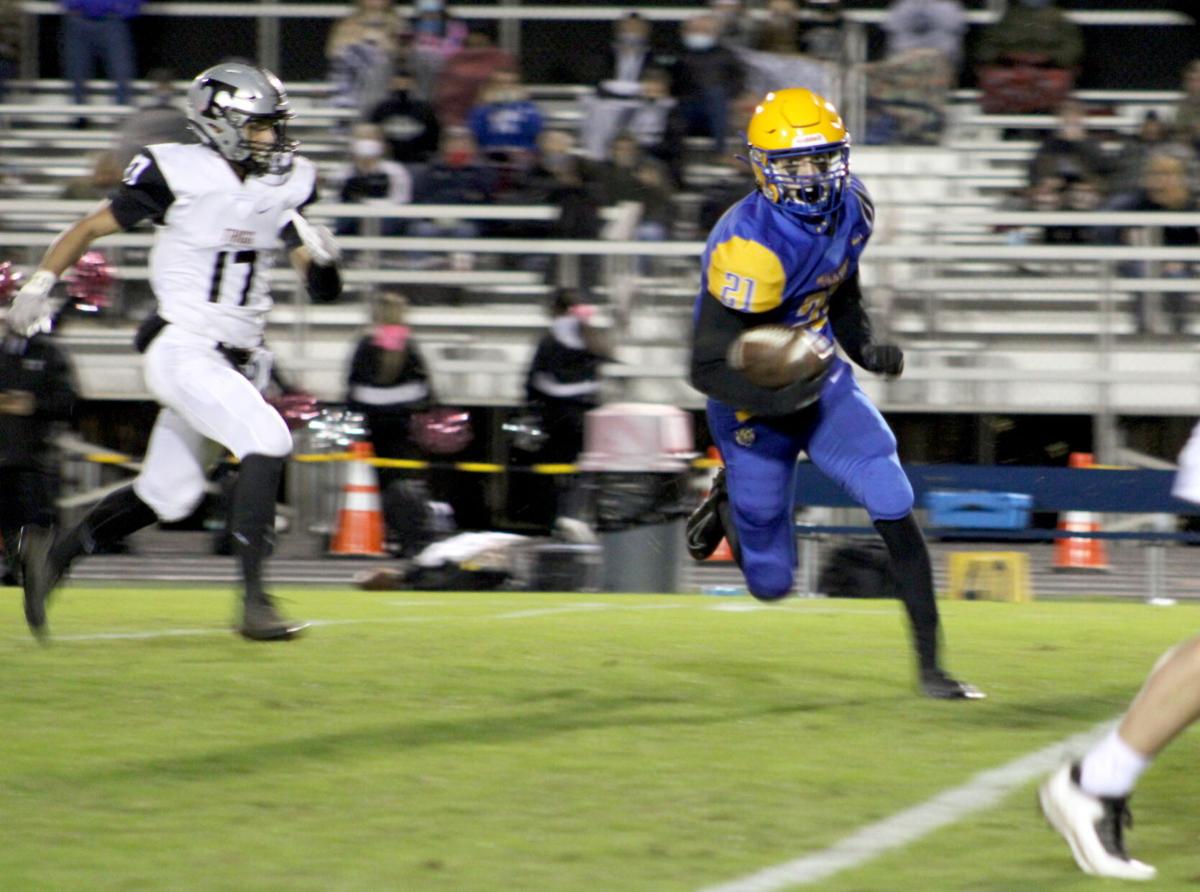 Senior Baron Wells puts Caldwell County on the scoreboard with a 67-yard touchdown pass from senior quarterback Russ Beshear in the Tigers’ 56-17 win over Trigg County. Wells tacked on a defensive TD when he took the ball from a Wildcat receiver. 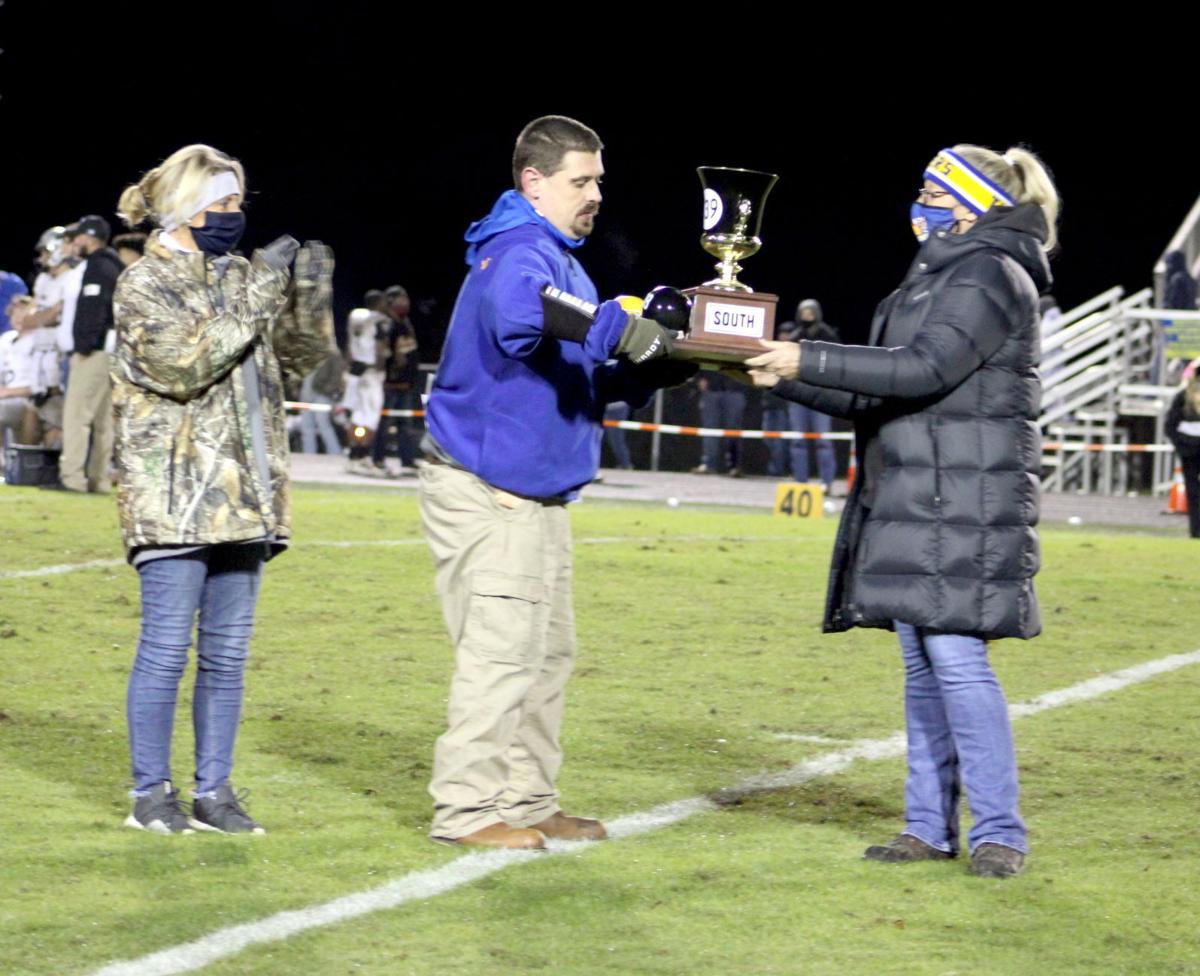 Senior Baron Wells puts Caldwell County on the scoreboard with a 67-yard touchdown pass from senior quarterback Russ Beshear in the Tigers’ 56-17 win over Trigg County. Wells tacked on a defensive TD when he took the ball from a Wildcat receiver.

For the eighth straight year, Caldwell County is taking possession of the 139 Bowl trophy, forcing a running clock in the second half en route to the 56-17 final.

It was Hall of Fame Night for CCHS, but it might as well have been Senior Night, as quarterback Russ Beshear, wide receiver Tripp Branch, tight end Tate VanHooser and wide receiver Baron Wells each scored at least once in the game, allowing juniors Logan Smiley and place-kicker Blake Vivrette to join them in the scoring column.

On the first drive for the Tigers (3-3), Beshear found Wells on a 67-yard touchdown pass with 9:56 left in the first quarter. Vivrette’s extra-point kick made the score 7-0.

CCHS halted the next drive for Trigg County (2-5) when the Wildcats fumbled the ball away to junior Layton Drew Davis at the TCHS 37.

Beshear hit VanHooser for a 36-yard pass, then Beshear punched the ball into the end zone with 6:56 left in the first period. Vivrette’s kick gave the Tigers a 14-0 lead.

Trigg County was able to put together a drive, using a 27-yard pass to set them up at the CCHS 8. The Wildcats kicked a 25-yard field goal with 4:19 left in the quarter to get on the scoreboard, 14-3.

Caldwell County’s next drive was halted at the TCHS 3, but on the Wildcats’ second play of their drive, VanHooser intercepted a pass and returned it 42 yards for a TD with 1:22 left in the first period. Vivrette’s kick made it 21-3.

On the first play of the second quarter, Branch pulled in an errant Wildcat pass and returned it 13 yards for another Tiger defensive touchdown with 11:51 left in the half. Vivrette’s kick made the score 28-3.

Three plays later, Beshear kept the ball on a four-yard TD run with 8:14 left in the half. Vivrette’s kick made it 35-3.

On Caldwell County’s next drive, the Tigers used Smiley runs of 25 and 31 yards to get into Wildcat territory. VanHooser made a 1-yard TD run with 3:20 left in the half, and Vivrett’s kick made the halftime score 42-3.

With more than a 36-point difference, the clock was kept running throughout the second half. Despite that, it didn’t take CCHS long to score again.

On the third play of the half, Smiley took a 24-yard TD run with 9:54 left in the third quarter. Freshman kicker Timothy Nichols’ kick gave the Tigers a 49-3 lead.

On Trigg County’s ensuing drive, the Wildcats were marching down the field when Wells wrested the ball from a receiver’s hands and returned it 52 yards for another defensive touchdown. Nichols’ kick ended the Tigers’ scoring, 56-3.

Trigg County put together another drive, scoring when Kendric Adams took a three-yard run into the end zone with 1:55 left in the third period. The extra-point kick made the score 56-10.

The Wildcats put together one last scoring drive in the fourth quarter, capped when Kelsey Parham scored on a 34-yard run with 6:44 left in the game, ending all scoring at 56-17.

CCHS Coach Will Barnes said he was concerned about Friday’s game after not playing last week.

“We hadn’t played a whole lot of football here recently,” he said. “You worry about maybe coming out flat, but that’s a credit to our kids…coming out here with a lot of energy and playing well, start to finish.”

Barnes praised his defense for dampening the Wildcat offense and scoring three touchdowns of their own.

“Any time you can make those turnovers into touchdowns, you’re going to have a good night,” he said.

Caldwell County will close out its regular-season schedule with a 7 p.m. Friday game at Christian County.

At halftime, the CCHS Football Hall of Fame Class of 2020 was recognized. Being inducted into the Hall this year are Rodney Bell, Timmy Beshear, Donovan Dane, Earl Hammond, Brandon Sigler, Ben VanHooser and Kent Wells.