California point guard Devin Askew is a leader on his high school team and is a tireless worker when it comes to improving his skills. 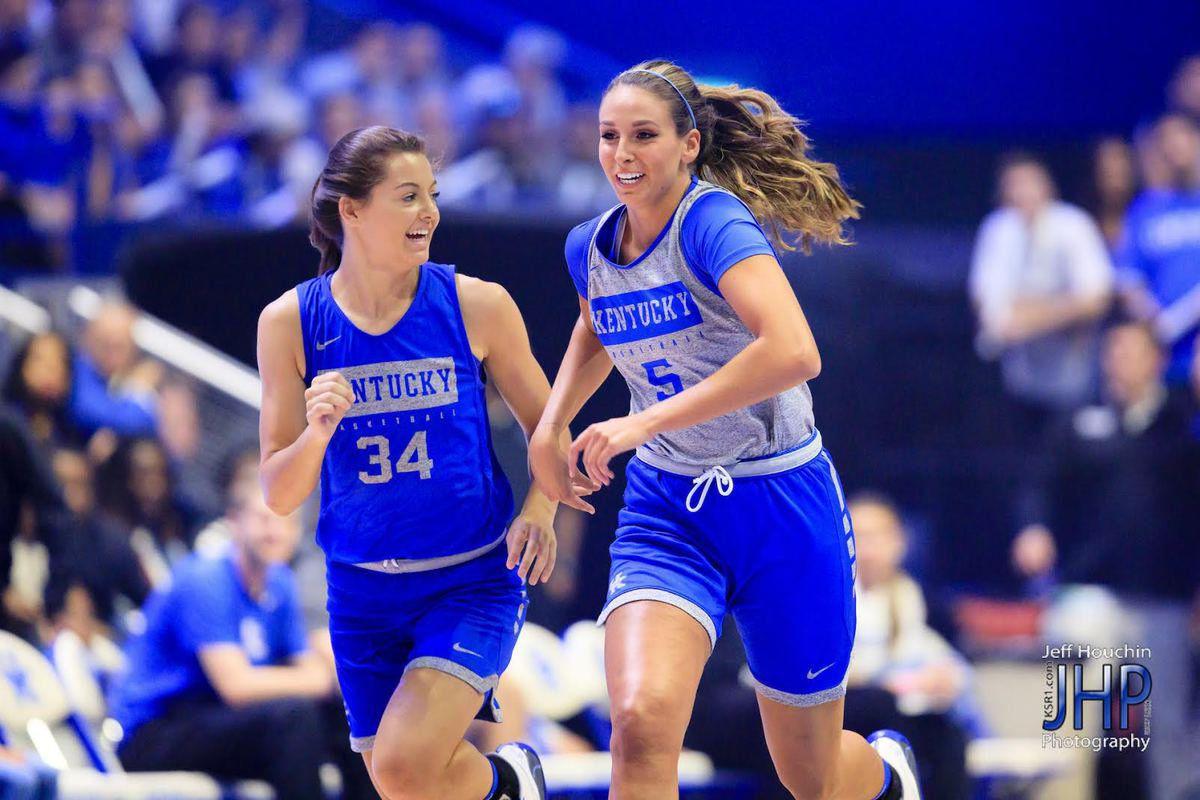 Blair Green (right) and Emma King know they will be role models for young in-state players and welcome the opportunity. 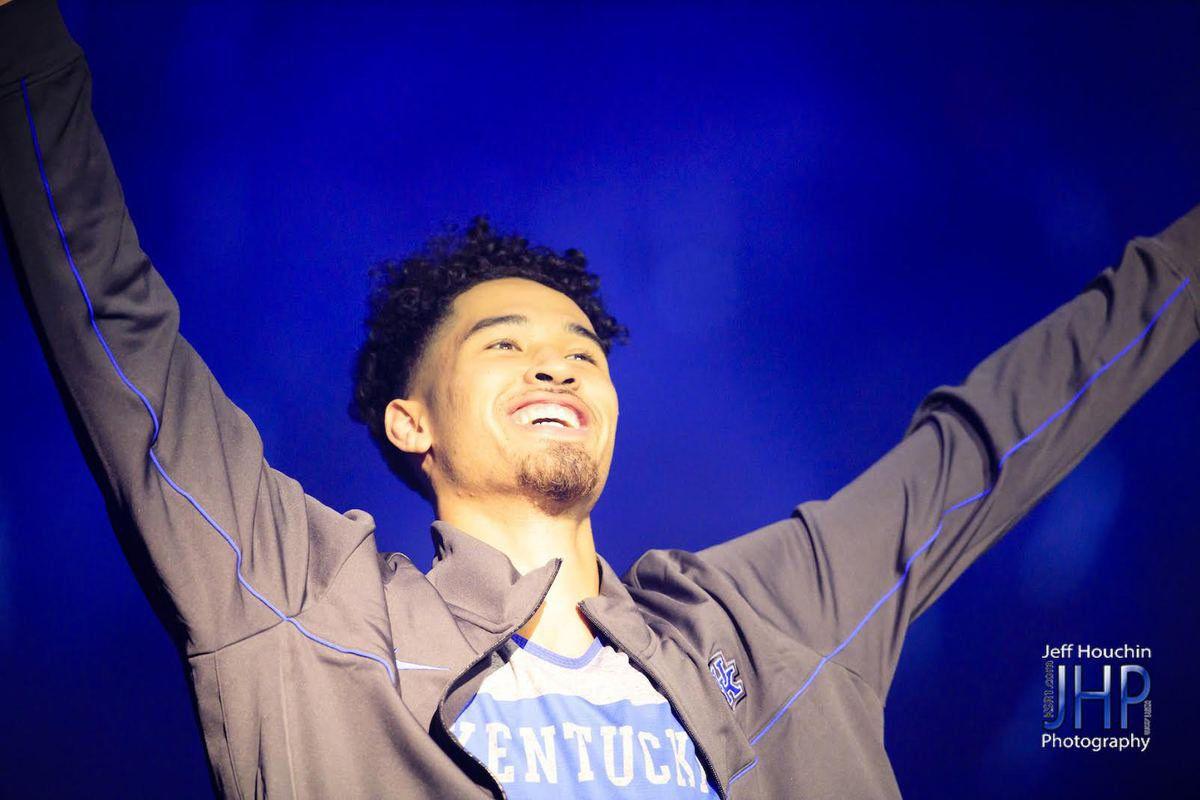 Johnny Juzang is the first player of Asian descent to play basketball at Kentucky.

California point guard Devin Askew is a leader on his high school team and is a tireless worker when it comes to improving his skills.

Blair Green (right) and Emma King know they will be role models for young in-state players and welcome the opportunity.

Johnny Juzang is the first player of Asian descent to play basketball at Kentucky.

Most Kentucky basketball fans will probably never know when Harvard is playing basketball this season. Kentucky freshman Johnny Juzang will.

His older brother, Christian, is a senior and started 25 of 29 games last year when he averaged 8.0 points, 2.8 rebounds and 2.4 assists per game to help Harvard win the Ivy League championship.

"I am so excited to watch him play," Johnny Juzang said. "That this is his last year blows my mind. He is one of my closest and best friends. Definitely a source of motivation for me and in the summer times he usually comes back home, so we would spend summers together, run all over town and work out 3-4 times a day. He is super close to me and I love him to death."

The transition from California to life in Lexington has not been that difficult for Juzang.

"It has been a lot of fun. Obviously we are doing what we love here every day and everything is provided for us that we could ever need, so that is great and super comfortable," Juzang said. "You don't have to worry about too much.

"But it has also been a great experience … campus life is really fun. We are having fun out here for sure."

Juzang will be the first player of Asian descent to play basketball for Kentucky. Calipari isn't sure about the significance to that because he doesn't worry about things like that. He says he never looks at what brand of shoes players wear or if they have tattoos.

Calipari said the first Latin backcourt in the history of the NCAA at UMass and that team went to the Final Four.

"What did it mean? It was great in Puerto Rico and the Dominican (Republic) and all those things," Calipari said. "I would say there's going to be people across the country where their children are going to look up to Johnny Juzang. I believe that. But he's here because he can really play basketball and he's a great kid and a great teammate."

Calipari recruited Juzang primarily for his shooting ability even though the freshman has impressed the UK staff with his overall play since arriving on campus. He also won't label himself as the team's best shooter no matter what the coach says.

"We have a lot of guys that can shoot. I do pride myself on my shooting, though," he said.

His workouts do not depend on getting up a certain amount of shots daily. Instead, he tries to always make a certain percentage.

Juzang said not only was he lucky to have a high school strength staff that prepared him physically for college but they also helped break down a lot of film for him.

"I think the biggest guys offensively that we watched from Kentucky were like Devin Booker and Tyler Herro. Those are guys we took a lot of film from and would break down a lot of stuff," Juzang said.

But Calipari likes that Juzang wants to be more than a shooter just like Booker and Herro learned to be during their one year at UK. Juzang says he wants to "get better and grow" each day as a player.

"Every day I want to feel that I got better at something or I am learning something. Honestly that is the biggest thing for me," Juzang said. "I get a real kick out of feeling like I got better today or learned something new today.

"I also just think pushing each other daily is big for me. We are one team growing so close, so I feel like I am cheating my teammates out of something if I am not giving it everything I have every day. I think finding something beyond yourself and really buying into the team pushes all of us to hold each other accountable and that's what I always try to do."

Missouri coach Barry Odom -- who will bring his Tigers to Lexington Saturday night -- certainly didn't mince words about the way his team played in last week's 21-14 loss at Vanderbilt.

"We could not run the ball, which is frustrating to me that we couldn't, and we didn't convert near enough on our third downs to give ourselves a chance, and then defensively felt like we were close, we just couldn't get off the field. Also you look at 120 yards of penalties, we won't beat anybody when we do that.

"We've got a decision to make on how we're going to respond. We're going to go on the road again next week to play a really good Kentucky team. We'll find out about the toughness and the resolve on how we bounce back."

Kentucky has four straight wins over Missouri, including a memorable comeback road win last year, and certainly needs a victory to enhance its chances of bowl eligibility and a fourth straight winning season.

Mater Dei High School coach Gary McKnight has won over 1,100 games, including a national title and 11 state titles. He sent LeRon Ellis to play for coach Eddie Sutton about 30 years ago.

McKnight says Askew is special on and off the court.

"He is the one who makes us go. He gets us down the court. He's a leader and he's not afraid to tell other kids they are not working hard enough," McKnight said. "He will get up in the morning and run on the beach and then work out and shoot at night."

Askew averaged 11.6 points and 5.1 assists per game in Nike EYBL play and shot almost 42 percent from 3-point range in 20 games.

"His mother is a doctor. He comes from a really good family and is very mature, very sharp," McKnight said. "He is a lot of fun to be around. He is a good student, too. He will look you in the eye and said, 'Yes sir. No sir.'"

McKnight said basketball is "definitely his thing" but that he is also involved in a lot of other activities at school.

"He is really good with the other players and getting them involved," McKnight said. "I have seen him sitting at the lunch table telling them to run this set or that set and how to do that. He just does a lot of things to keep everybody involved and that's part of what makes him such a good leader as well as a good player."

Askew said he felt Kentucky not only gives him a great chance to improve as a player but also win a national championship. He averaged 14 points, 6.8 assists and 3.5 rebounds per game last year for Mater Dei when it went 29-5.

Sophomore Blair Green of Harlan County knew freshman Emma King of Lincoln County "a little bit" before King got to UK because they were in the same EYBL program but in different age groups.

"She is a ball of energy and fun to be around," Green said.

King said Green was "like my big sister" when she got to UK in June.

"She kind of took me through the ropes. Now we just kind of hang out. I know that is somebody I can count on on the team -- not that I can't count on everybody else -- but that is somebody is I have developed a close relationship with. We have a fun time together. We are pretty similar," King said.

With the graduation of Maci Morris, Green and King will now be the players a lot of younger girls in Kentucky will aspire to be like just like they did Morris during her UK career.

"I don't dread that. It's humbling to think that people will want to be like you. That's something to look forward to. But you have to also be cautious because you never know who is watching," King said.

"That is a reason I try to live a life that I will not get myself in trouble because you never do know who is watching. You might as well just go ahead and do the right thing and that is something I try to do whether there are people watching or not.

"It's a big pressure but it is good to be able to be somebody that someone else can look up to. Just for other people to think they want to be like them is a big enough compliment in itself for anyone, or should be."

King, like Green, is a terrific outside shooter and has a work ethic similar to the UK sophomore.

"She is determined. She is always getting up extra shots. We learn from each other," Green said. "We have been living in the gym lately and getting in there every chance we get. Get shots up, work on ball handling, play pickup."

Green knows the autograph and picture requests that may fall more on her and King from in-state players with the departure of Morris.

"I love it. Just to know I am a role model to these kids keeps me going," Green said. "It makes me want to be the best I can be and show them they can do the same. Having them come up to me, just makes me really happy and proud and I know Emma feels the same way. If anything, I think it motivates us to do even better."

Fans got to ask UK basketball coaches questions during the recent Kentucky Women's Clinic. One asked Joel Justus what played had been the biggest surprise so far this season.

"It is hard to say because, for me personally, you don't see all these guys play as much before they get here as you thing. You might see a couple of guys play more (than others)," Justus said.

"I saw Tyrese (Maxey) play when he was rising into his junior year and don't think I saw him play in a game until he was here. I didn't see him play live because of the way we go and chase around (different players).

"So no one really surprises you because you don't really know until they get here (how they will play."

Another fan asked assistant Kenny Payne who he felt was the team's most improved play. His quick answer was sophomore Immanuel Quickley.

"The biggest growth is when you see guys not worried about what we (coaches) are doing. Just got to get the mindset to play confident. If you make mistakes confidently, we (coaches) are still on board with you. Immanuel is playing with so much more confidence."

Quotes of the Week

"Sometimes you want your guys to have swag and toughness. Sometimes it is a fine line (not to be too aggressive) but I would rather have a team that is aggressive," Kentucky assistant basketball coach Kenny Payne on the best attitude for a team to have.

"Big fan of his game. I mean this all positively, he's a junkyard dog in my opinion. Pit bull. Tough as they come. Probably as good an on-ball defender as there is in the country," Florida coach Mike White on UK point guard Ashton Hagans.