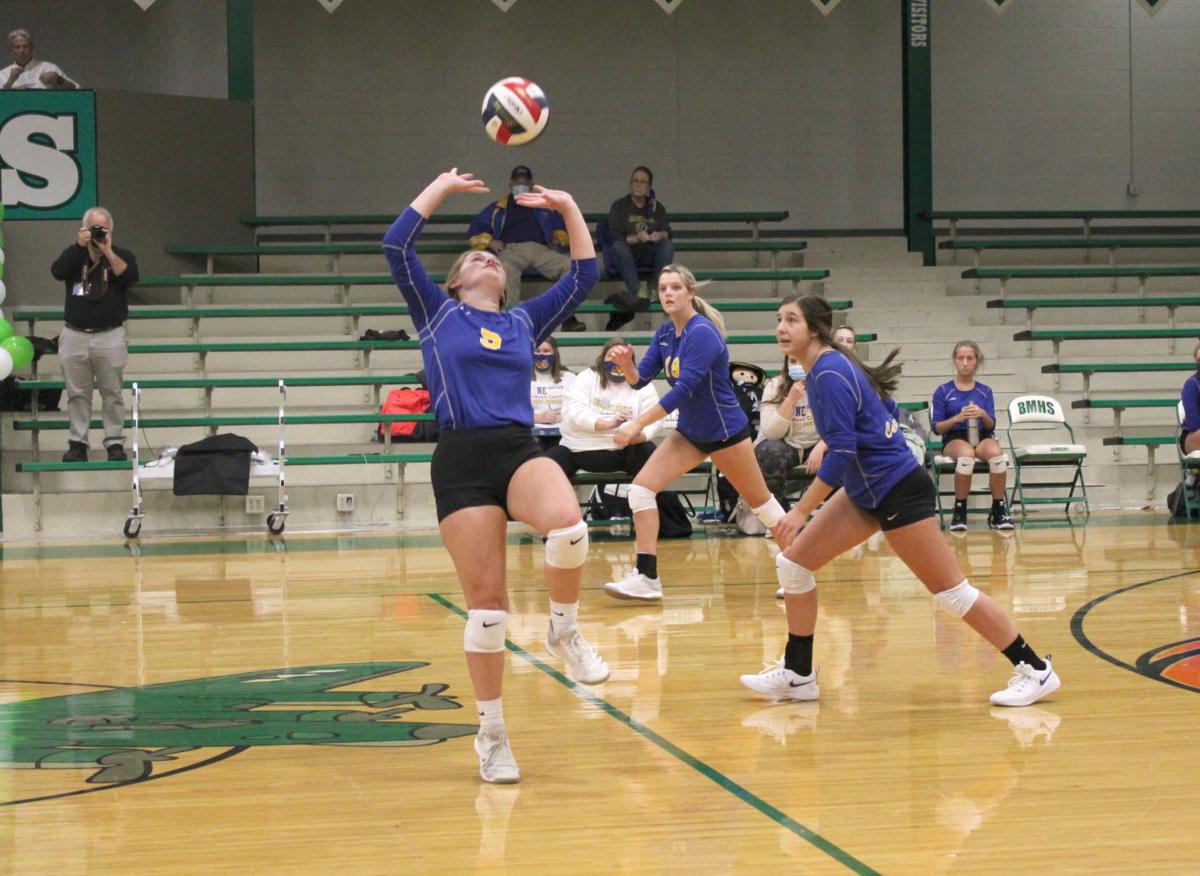 Senior setter Kendyll Prowell (5) makes a back set while junior right-side hitter Savannah Scott (19) and junior middle blocker Kynady Thomas prepare to make an attack at Ballard Memorial on Friday in the All A Classic semistate match. 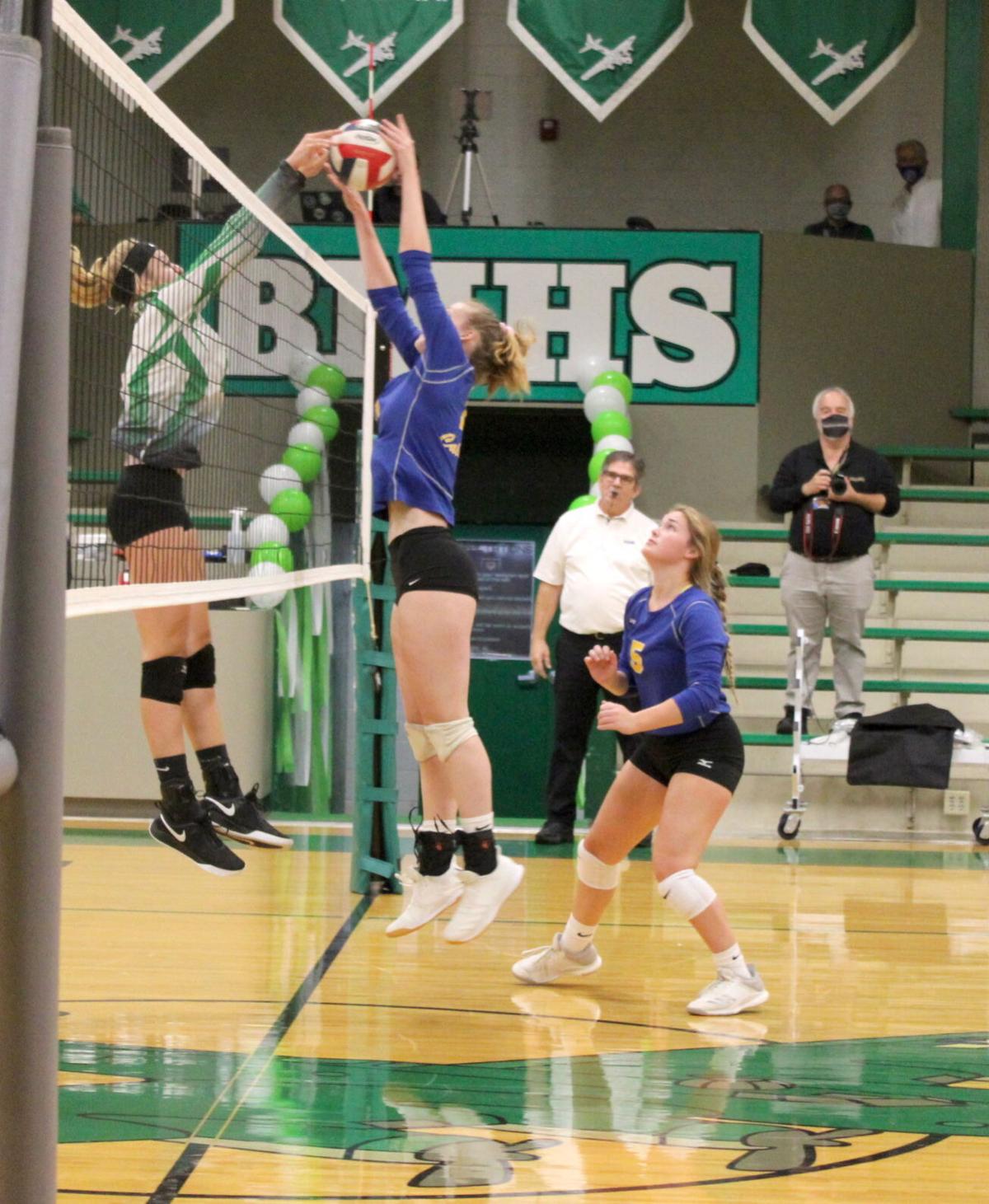 Senior middle blocker Abby Griggs (right) jousts at the net with a Ballard Memorial player in the All A Classic semistate match Friday.

Senior setter Kendyll Prowell (5) makes a back set while junior right-side hitter Savannah Scott (19) and junior middle blocker Kynady Thomas prepare to make an attack at Ballard Memorial on Friday in the All A Classic semistate match.

Senior middle blocker Abby Griggs (right) jousts at the net with a Ballard Memorial player in the All A Classic semistate match Friday.

BARLOW — The Caldwell County volleyball team came within a point of winning its All A semistate match three times Friday at Ballard Memorial High School, but the host Lady Bombers were able to pull out the win deep into the fifth set, advancing to the All A Classic state tournament.

The battle was between Second Region All A champion Caldwell County and First Region champ Ballard Memorial.

Ballard Memorial (17-0) will play Pikeville (15-0) in the first round of the All A Classic state tournament at 10:45 a.m. Central Time on Saturday at McBrayer Arena at Eastern Kentucky University.

In the semistate match, Caldwell County opened the first set with five straight points behind serving from junior defensive specialist Adison Sullenger and led by as much as eight points, taking a 14-6 lead.

Ballard Memorial got back into the game, scoring 10 of the next 13 points to pull to within 17-16. The Lady Bombers brought it to a tie at 19-19 before the Lady Tigers scored four straight points behind serving from junior outside hitter Mary Tays, but BHS scored seven of the last eight points to win the set 26-24.

In the second set, CCHS scored the first two points of the set and took a 4-2 lead, but Ballard Memorial scored seven straight points behind serving from junior setter Isabella Myers to push out to a 9-4 lead.

Trailing 13-7, Caldwell County scored five straight points behind Sullenger’s serving and got it to a 15-15 tie, but the Lady Bombers scored 10 of the last 11 points to win the set 25-16.

The fourth set featured an early back-and-forth battle, but CCHS scored six points behind the serving of senior outside hitter Olivia Mitchell to take a 12-6 lead and kept that lead to a 25-23 win.

The fifth and deciding set was a back-and-forth battle, with neither team taking more than a three-point lead. Caldwell County had match point at 14-13 (the fifth set is played to 15 points with a two-point difference), but Ballard Memorial won the volley.

The Lady Bombers took several one-point leads, but the Lady Tigers would tie the game again. CCHS got a 19-18 lead, again serving for match point, but BMHS would win the volley. The Lady Tigers took a 20-19 lead, but Ballard Memorial won the next three points to win the match.

“Adversity is what’s going to define you, how you handle yourself in those tough moments,” he said. “We came from two sets down, battled right back, won the third (set), won the fourth and had several opportunities to put away a feisty team. Tonight was a game of inches.

“You’ll hear nothing but compliments out of me and my team about the way Ballard played. Their fans gave us a great environment, and congratulations to Coach Solomon on No. 300.”

Cortner said his team was ready for a hard-fought battle.

“(Before the match,) I sent them a quote from Mike Tyson,” he said. “It said, ‘Everybody has a plan until they get punched in the mouth.’ Our goal was to throw the first punch.

“We came out (scoring the first points), threw the first punch, and really, all that did was tell Ballard to wipe a little blood out of their nose and come back at us. They stormed back, and we really matched the intensity once it got going.”

“Our character is defined by our age, by our leaders, the four captains,” he said. “When it came crunch time, we fed the ball to Olivia (Mitchell) and Abby (Griggs) and said, ‘Go hit it, flex and just bring your power.’ With Riley (Thomas) back here on defense and Kendyll (Prowell) setting and moving the ball around — we’ve been in these situations.

“We had a little bit of an edge down toward the end. We just couldn’t get the ball to bounce our way.”

Mitchell led the offense with 27 kills to go with three aces. On defense, she repelled a match-high 32 digs and rejected a co-match-high two blocks.

Griggs slammed 16 kills for the Lady Tigers, while Sullenger served up a co-match-high four aces. Prowell handed out a match-high 48 assists.

On defense, Thomas had 23 digs, while Tays had 14 to go with three aces. Savannah Scott had a co-match-high two blocks for CCHS.

Myers had a match-high 28 kills to go with 19 assists, 24 digs, two blocks and four aces for Ballard Memorial. Morgan Blankenship had 26 assists for the Lady Bombers, while KyLee Bodell had a team-high 27 digs.

Caldwell County took part in the “wRECk at the Plex” Saturday in Hopkinsville, beating Marshall County 3-1 but falling to Bowling Green 3-1.

Caldwell County will host Madisonville-North Hopkins at 7 p.m. Thursday in amatch that will not count toward the district standings. The Lady Tigers will face Bowling Green at noon Saturday at Christian County High School before returning home to face Marshall County on Tuesday.