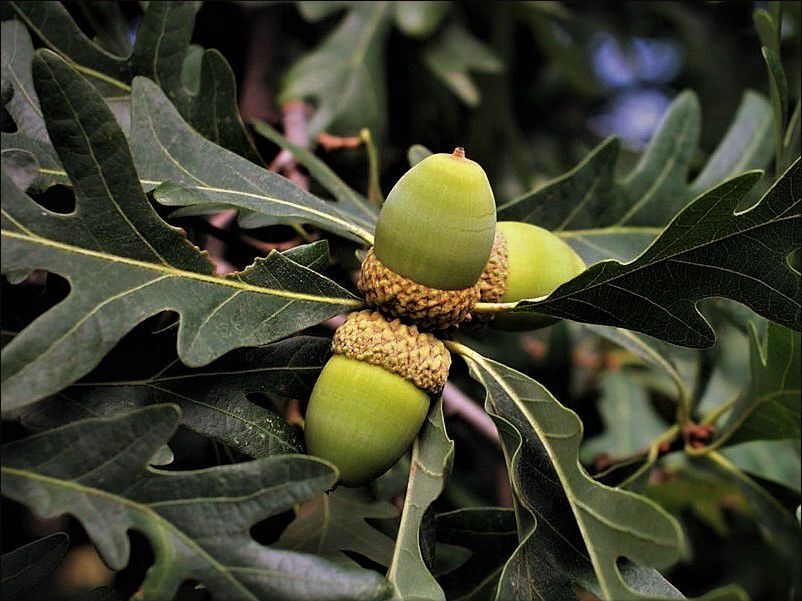 If a hunter finds abundant acorns on a white oak tree, he might anticipate that wildlife will be visiting there regularly. 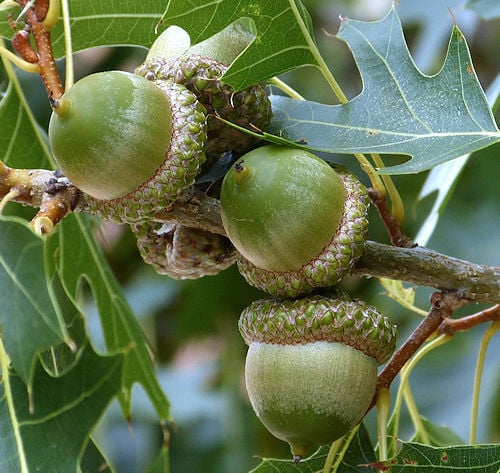 Northern red oak acorns may not be wildlife’s first choice for taste, but there seems to be plenty of these this season.

If a hunter finds abundant acorns on a white oak tree, he might anticipate that wildlife will be visiting there regularly.

Northern red oak acorns may not be wildlife’s first choice for taste, but there seems to be plenty of these this season.

In some places in the woods right now, it is like walking on marbles.

days. They are the seeds that the trees generate to maintain the species with sprouts for the future. But they overproduce these nutty fruits to feed and sustain a variety of wildlife in the process.

Acorns are a huge part of the natural system as a food source in the oak-hickory hardwoods that are native in this region and over much of eastern North America. The great eastern forest of pre-settlement times now exists only as relative patches of its former self, but the oaks in the remnant hardwoods of our landscape today are just as important for their acorn output.

Acorn production becomes most apparent in the early autumn as the ripened nuts begin to drop to the ground, but the yield is not uniform year to year. Like the weather — and maybe largely because of the weather — it fluctuates.

The bottom line seems to be that this year’s overall acorn crop is on the lower edge of fair to middlin’. But before the breakdown must come some parameters.

Just as all oaks are not the same, there are dissimilarities in acorns as well. There are several different species, and some cousins are farther removed than others.

Significantly, oak trees can be divided into two major groups, the red oaks and the white oaks. A big difference botanically is that the acorns of red oaks are two seasons in development, while those of white oaks are finished in one season.

The acorns of a red oak species tree that are now ripening and dropping originated from flowering in the spring of 2019, about a year and a half ago. The current white oak acorns owe their start to spring of this year, growing to completion in just about six months.

Where that sometimes matters is that harsh weather events of the most recent spring may take a toll on this year’s acorn production of white oak group trees, but not necessarily the red oaks. Meanwhile, those red oaks might have been more vulnerable to weather events of two springs ago, while bad weather in 2019 is usually inconsequential to this year’s white oak acorns.

Trees in the white oak group have leaves with rounded lobe tips. Some also have bark that is lighter in color, but this is not uniform. Included among these are the species white oak as well as post, swamp white, bur, chestnut and chinquapin oaks.

It depends on the location and habitat type, but if there is a dominant oak in the region, it is the northern red oak. From the white group, the species white oak (Quercus alba) is rather the poster child and very prominent in this region. However, red oaks typically outnumber the white oaks hereabouts.

Acorns of the white oak species are a preferred food of seemingly every critter that eats acorns. The shells of these are relatively thin, so it is easier to get to the good stuff. The meat of a white oak acorn is substantial, so the payoff is good.

White oak acorns have far less tannic acid and lack the bitterness of the red oaks. Comparatively, white oak acorns are much sweeter, sort of the ice cream of oak seeds.

White oak acorns hitting the ground tend to get gobbled up right away by deer, squirrels, turkeys and other wildlife, which typically concentrate on the bounty as long as it lasts.

Red oak acorns are clearly a second choice. Some more bitter and harder-shelled acorns like northern red oaks are ignored for weeks. Many are left to weather and improve with age. Some of the tannic acid in red oak acorns leaches away in time, leaving them more palatable to wildlife in late winter.

Kentucky Department of Fish & Wildlife Resources personnel conduct a statewide mast survey annually to estimate production of acorns, hickory and beech nuts. By checking a certain set of trees across Kentucky, biologists get a feel for what oaks are yielding generally.

Biologist and survey coordinator Cody Rhoden said the current acorn crop overall is in the “low average” range, seemingly a little off from last year’s production but not a failure.

Within the total, white oaks are more disappointing. Trees in the group are yielding fewer acorns than last year. In some areas, white oaks seem to be producing no acorns at all, while some are yielding stunted acorns.

Rhoden said the leaner white oak acorn yield may be the result of a late hard freeze that occurred this past spring.

While white oak acorns are generally fewer and downright scarce in some areas, Rhoden said individual trees here and there may yield abundant acorns. These should be hot spots to attract local wildlife, including deer and squirrels, and could play large for hunters.

“If you find a white oak with good mast on it, it’s worth sitting on,” he said.