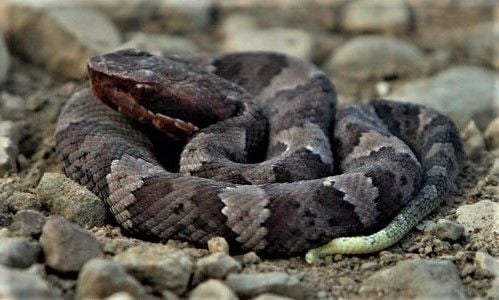 Above: Juvenile cottonmouth looks much like it will as an adult aside from its markedly smaller size and the lighter yellow tip of its tail. Below: A recently born copperhead has a vividly yellow tail tip that will fade to a shade of green, then brown in about the first year of life. 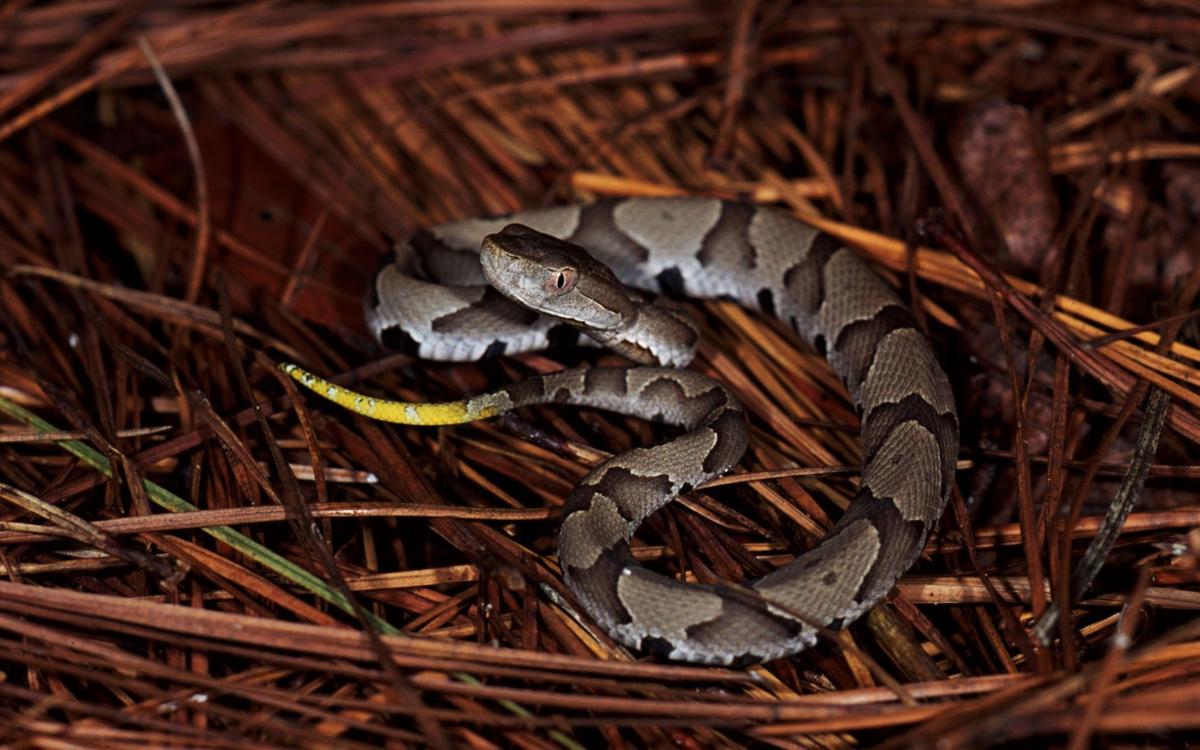 Below: A recently born copperhead has a vividly yellow tail tip that will fade to a shade of green, then brown in about the first year of life.

Above: Juvenile cottonmouth looks much like it will as an adult aside from its markedly smaller size and the lighter yellow tip of its tail. Below: A recently born copperhead has a vividly yellow tail tip that will fade to a shade of green, then brown in about the first year of life.

Below: A recently born copperhead has a vividly yellow tail tip that will fade to a shade of green, then brown in about the first year of life.

“Tail of yellow, envenomate a fellow.”

That is not an old folksy bit of wisdom. Likely, nobody ever said that (unless you count that I just wrote it as a rhyming column lead).

It could have been said by some ancient outdoorsy sage, however, to remind us about a coloration trait cluing us in to the identity of a couple of poison-packing reptiles.

Regarding snakes, most often when one of the slithering animals is encountered, somebody reflexive asks: Is it poisonous? It is a pretty common question, because quite often people still don’t know one species from another. So, they irrationally fear all of them.

Hereabouts, there are three types of snakes that are venomous. All are a sort of pit viper. No other native snake here is poisonous. If it’s not a pit viper, it can’t squirt venom into you.

Might a non-venomous snake bite you? Well, maybe if you pick it up or otherwise accost one. But a chipmunk would bite you for the same thing, and you probably do not dread them. (Besides, I think I would rather be bitten by a non-venomous snake. A wild chipmunk used to live in my apartment; his bite was brutal.)

Locally, our pit vipers include copperheads, cottonmouths and timber rattlesnakes. In southern Trigg and possibly Calloway counties, there may still be a trace population of pygmy rattlesnakes. These are so rare as to be a non-issue, but were one to be introduced to you, you could effectively regard it as just a little bitty rattlesnake by both its appearance and behavioral qualities. Copperheads by far are the most common of these big three pit vipers. They are rather timid and retiring, however, and as chiefly nocturnal, they do not get seen nearly as often as they might. Cottonmouths are plentiful in select swampy, wetland habitats of far western Kentucky, but they are rare to absent in other places.

Timber rattlers are spread throughout the region, but nonetheless they are rather rare. Most folks here never have the fortune, good or bad, to meet a local, native rattler.

This time of late summer is when pit vipers produce young. The baby vipers arrive by live birth — no egg-laying for these species. Typically, the mama snakes churn out half a dozen to a dozen youngsters, each of which may be 7 or 8 inches long at birth.

There is no reason for juvenile snakes to remain with mom or siblings very long. There aren’t any teats on a female pit viper to nurse her offspring. The babies get no real parental care, so survival warrants that they just scatter and get out there to make a living as small but independent serpents.

That is why late summer into early fall is a time when more juvenile snakes, pit vipers among them, might be encountered.

Again, rattlesnakes are so scarce as to be a non-factor. In terms of possible human encounters with these baby snakes, most would involve copperheads, while a few in the right places could be cottonmouths.

Juvenile copperheads, cottonmouths and, deceptively, a few species of non-venomous snakes are quite similar in coloration and pattern. They tend to be banded in colors ranging from browns to rust to grays with contrasting shades.

One of the easiest ways to identify baby copperheads and cottonmouths is the presence of a yellow-green tail tip on juveniles of both species. This brightly colored marking is not seen on any of the harmless snakes here.

Juvenile copperheads and cottonmouths also have general pit viper features. Their heads are wider and their necks smaller by comparison than those of non-venomous species. They have vertical, catlike eye pupils. They have tiny pits (as in pit viper) on each side of the face below the eye.

But it is hard to see some of this stuff on a tiny snake unless it is up close and the lighting is good. And most encounters do not provide good examination circumstances. Indeed, if there is a possibly that a baby snake is a pit viper, it is not a good idea to get very intimate with it.

Juvenile vipers do not carry as much venom as adult snakes, and that juice is no more nasty than that of their elders. Still, young snakes’ venom is just as bad as grown-ups’ venom, so you do not want that in you.

The sulfur-yellow tip on a baby snake’s tail is the easiest-to-see indicator that here we have either a copperhead (probably) or cottonmouth (possibly), but either way we don’t want to stir around unnecessarily with the youngster.

A slithery yellowtail just wants to go about its business as a newly established pit viper. It is not going to be aggressive and only seeks to be left alone. Fool with it, however, and there is a chance the little wiggler could provide an example of why so many people fear its kind.